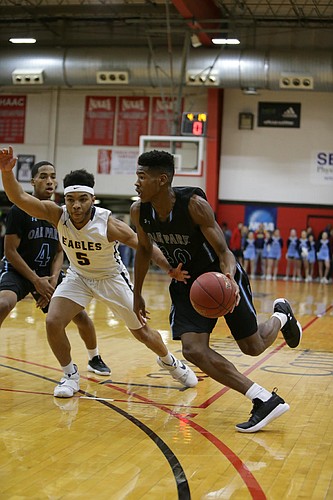 Oak Park High guard Ochai Agbaji drives to the rim during a recent high school game against Liberty North in the William Jewell Tourney last December. The 6-foot-5, 195-pound wing recently became one of the hottest unsigned prospects in the country after picking up offers from Kansas, Nebraska, Oregon, Texas A&M and Wisconsin. On Thursday, Feb. 8, 2018, Agbaji committed to KU during a ceremony at his high school. by Darryl Woods/810 Varsity

The updated Rivals.com recruiting rankings for the Class of 2018 came out on Monday and one future Jayhawk made a monster jump.

Unranked when he committed to Kansas earlier this year, three-star guard Ochai Agbaji, of Oak Park High in Kansas City, Mo., cracked the Top 150 in Rivals' latest release, moving all the way up to No. 141.

Agbaji, a shooting guard with good size and a versatile skill set that inspired KU coach Bill Self to compare him to former Jayhawk Travis Releford, officially signed with the Jayhawks last week. He became the fourth player in the 2018 class to make his commitment official and sign a letter of intent with KU.

Two of the other three prospects — combo guard Quentin Grimes and center David McCormack — moved up, with Grimes jumping two spots from No. 10 to No. 8 and McCormack moving up one spot to No. 33.

Point guard Devon Dotson was the only future Jayhawk in the 2018 class — for now — who dropped in the updated rankings, falling one spot from No. 17 to No. 18.

One other notable ranking for the Jayhawks came in the form of the top remaining player in the class, five-star guard Romeo Langford, staying in the No. 6 spot overall.

Duke, which previously had locked down the top three players in the class — R.J. Barrett, Cameron Reddish and Zion Williamson — now has the Nos. 1, 3 and 5, as Williamson dropped two spots from No. 3 to No. 5 and UNC-bound small forward Nassir Little jumped up to No. 2.

What is he ranked?

My bad. Into the Top 150 clearly isn't enough info. Got caught up rushing around earlier today with a million different things going on at once and forgot to include the ranking. It's in there now. No. 141.

Thanks for your patience and help pointing out the oversight.

Have a great night!

He's ranked 141. Matt shouldn't you have included that in the story?

If you know already why ask HIM?

Look folks Matt shared and we appreciate that. Typing errors happen and not a big deal. Just looking at his big smile tells me he knows what he is talking about. Rock Chalk