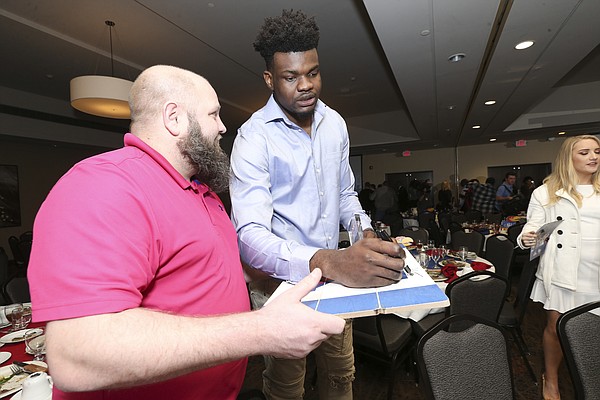 Kansas center Udoka Azubuike signs an autograph for a fan following the Kansas basketball banquet on Tuesday, April 10, 2018 at the DoubleTree Hotel in Lawrence. by Nick Krug

At one point during Tuesday's postseason banquet, Kansas basketball coach Bill Self took a minute to praise sophomore center Udoka Azubuike, not only for his solid season and all of those dunks, but also the hard work and fight he put in to come back from a knee injury before the Big 12 tournament in time to help Kansas reach the Final Four.

“Dok, we are all very proud,” Self told his 7-foot center in front of the entire room. “You have grown up and you are one bad man.”

“That was great,” Azubuike said after the banquet. “That was nice, seeing that come from him.” Asked if he had heard any such compliments from his head coach before, Azubuike grinned before answering.

“I have,” he said. “Something like that, probably in games, some games when I was playing good.”

With the season now behind him and Self at least temporarily having to wonder if he has coached Azubuike for the last time, the way he has seniors Devonte' Graham and Svi Mykhailiuk and underclassmen Malik Newman and Lagerald Vick, who decided to leave early to turn pro, the KU coach said he was uncertain about where Azubuike's head was at regarding his future.

“I think it could be in the next week or so, but I don't think it'll be tomorrow or anything,” Self said of a possible Azubuike announcement. “I don't know exactly where he is right now.” That makes two of them.

Azubuike said he spent some time last week talking it over with his family but believes now that the rest is up to him.

“Yeah it is. It definitely is,” he said when asked if it was a tough decision. “Like I said, I spoke to my family about it and all that, and right now it's pretty much my decision. I've just got to start thinking about it probably the next couple of days or the next week, I'll make my decision about what I'm going to do.”

One thing that is certain is that the knee injury that plagued him throughout March has continued to improve since the end of KU's season.

“It's getting better, way better than it was,” Azubuike said. “Way better. Right now I can sleep without the brace on so that's good news for me. It's pretty much just staying in the brace right now. That's pretty much it.”

Dok, words of advice: shed some pounds; hit the gym to focus on speed, toning; get lighter - you really need to; increase your stamina: run, run, run and keep running, till you really dont' have fat left in your tummy; work on your jump-shots (yes, including from FT line!!), verticals, quicker lateral moves. Come back to KU, next year you'll be top 10 reec. Guaranteed!!

Shed some pounds? What? From where?

Azabuike is pretty ripped, I'd say 8% bodyfat, so there's not much to lose. Are you asking him to lose muscle? I think he just doesn't have the freak endurance genes. You can watch him run, and he's not a natural runner; his gait is a little awkward. Very few 7-footers hit the genetic lottery across the board like a Deandre Ayton. Dok has a big, big frame, and it's just a matter of physics that moving 280 lbs from one end of the court to the other is tiring. He kind of is who he is in that regard. Yes, his shooting can improve.

Azubuike is still new to basketball; he has a long way to go before he is useful to the NBA.

I'm convinced that if it weren't for the knee injury this would be a no brainer for Dok to come back to KU. But the injuries have him nervous about playing college ball one more year, and possibly getting hurt and losing his shot at the NBA and at a better life for his family.

I hope he really doesn't think he is ready for the NBA.

One more year Big Man. Work on that running hook and a short range jumper. Then test the waters.

Here's for you, Dok, and KU coaching staff: