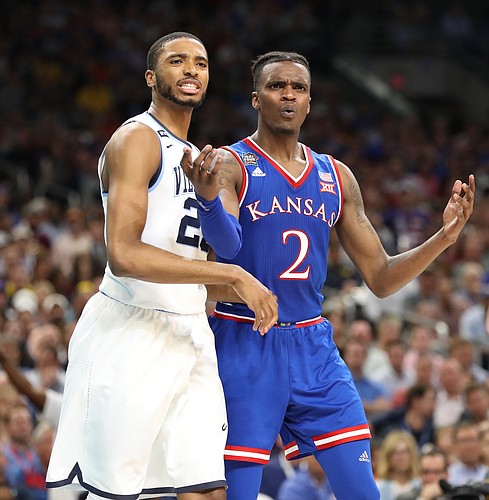 Kansas guard Lagerald Vick (2) looks for a call after knocking a ball from Villanova guard Mikal Bridges (25) during the second half, Saturday, March 31, 2018 at the Alamodome in San Antonio, Texas. by Nick Krug

Quick grades for five aspects of KU’s 95-79 loss to Villanova in the season finale at the Final Four in San Antonio.

Kansas coach Bill Self was adamant after the game that it was not KU's offense that cost them in this one. And it's hard to argue with him. After scoring 59 in its last two meetings with Villanova, KU got to 79 in this one, shooting 45 percent from the floor and 33 percent from 3-point range. Both numbers are a little under KU's season averages, but 79, on a normal night, would have been fine.

Yes, Villanova was red hot from start to finish, and it's hard to blame the KU defense for all of that. Besides, doing so takes too much credit away from Villanova's amazing night. Still, KU could have been better — especially early — in terms of energy, intensity and trying to make Villanova uncomfortable. The way the Wildcats moved the ball — and shot it — it's hard to envision that approach, had Kansas done it, changing the outcome all that much. But on a night when KU needed its best defensive performance of the season, it got something below average, which merely added to the problem.

Udoka Azubuike's mom was in the building, which is a terrific story unto itself. But her presence did not inspire the kind of night many KU fans were hoping. In 26 minutes, three above his season average, Azubuike finished with eight points, five rebounds and a block while knocking in 4 of 6 shots from the field. But even the block was a forgettable moment, as Azubuike pounded it off the glass only to have Villanova's Eric Paschall scoop it up, recognize the shot clock was winding down and bury a deep 3-pointer that was the one that really made you think a comeback wasn't in the cards for Kansas.

Devonte' Graham finished with the big-point night many thought he might and shot 9-of-18 from the floor and 4-of-8 from 3-point range. All in all, he had a strong finale. Unfortunately, he got very little help. Malik Newman topped 20 points (21) for the sixth time in eight games but shot just 6 of 14 and 2 of 5 in the process. And Lagerald Vick finished with eight points and two rebounds and Svi Mykhailiuk 10 points and two rebounds on 2-of-8 shooting. Villanova had a lot to do with a lot of KU's shooting numbers, as their extended defense put constant pressure on the perimeter and never let KU find any rhythm. The Jayhawks' perimeter D, which came against a team that likely would've shot lights out against anybody on Saturday night, was not where it needed to be.

Silvio De Sousa (7 points and 7 rebounds in 10 minutes) really gave Kansas a spark in the first half when they desperately needed it. But the hole was too big by the time De Sousa did his thing. Marcus Garrett capped his strong freshman season with another sub-par effort, finishing scoreless with two rebounds and an assist in 18 minutes. And the rest of the KU bench merely checked in with the game out of reach as a way to give Graham, Mykhailiuk and Newman the final ovation they deserved.

Thank you team, coaches, trainers all the staff for a great year. Hats off to Devonte and Svi especially may you find what you want in your future. You left it all on the floor. You will be remembered. I was in error when I guessed the team would be 9-9 in big 12 play. I did not count on the unknowns, the heart and desire. You men and I mean that played your hearts out for the University of Kansas and I respect that.

"... as a way to give Graham, Mykhailiuk and Newman the final ovation they deserved."

Is this an indication that you think Self was giving fans a chance to bid adieu to Malik Newman?

Or just a chance to recognize him for his outstanding postseason contributions?

Self has been known to give star non-seniors a standing ovation if he suspects that they will be leaving for the NBA draft.