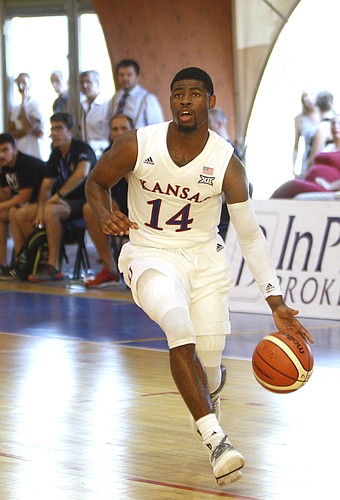 After a year of waiting and watching and four exhibition games in Italy to whet his appetite, Kansas guard Malik Newman is finally ready to get back to college basketball.

The Mississippi State transfer and Jackson, Miss., native came to Kansas after his freshman season with the Bulldogs during which he averaged 11.3 points per game while playing in all 29 games that season and making 21 starts.

Despite the solid numbers and key role, Newman left MSU in search of a better fit. He found it in Kansas, a program which he strongly considered while being recruited out of high school and has been quietly putting in work and waiting for his big return ever since.

Before moving into what we can expect from Newman during his first season as a Jayhawk, let’s take one last look back at what he accomplished as a freshman at Mississippi State during the 2015-16 season.

• Named SEC freshman of the week in late December.

• Scored a career-high 25 points against Ole Miss in late January.

• His 329 points that season marked the 10th most by a freshman in school history and his 61 3-pointers were the second most all-time for an MSU freshman. For some perspective, last season, as a KU junior, Svi Mykhailiuk scored 351 points and dropped in 70 3-pointers.

With all of that in mind, here’s what we can expect from Newman during the 2017-18 season:

He Will: Lead the Jayhawks in scoring, with his averaging finishing between 17-20 points per game.

Quick, tough and hungry. Those are the three words that first come to mind when thinking about KU guard Malik Newman and all three should factor into his ability to put points on the board during the upcoming season.

As his final game in Italy showed, Newman can get red hot in a hurry and score in bunches.

The competition wasn’t all that impressive, but Newman’s game was. And he did not operate solely as a jump shooter. He scored in transition. He hit the offensive glass. He flashed his pull-up game. And that versatility and his ability to score in a variety of ways is why so many people believe Newman can and will lead Kansas in scoring this year.

Add to his own skills the fact that he will be surrounded and supported by some big time talent, inside and out, and it’s easy to see how and why Newman could be in for a big season during his first year with the Jayhawks.

He Won’t: Be the same type of player as Frank Mason III but that won’t keep Kansas from being in the conversation for the nation’s most dynamic one-two punch in the backcourt.

One of the coolest things about Kansas plugging Newman in to “replace” Mason this season is just how different the two players are.

Sure Newman is capable of picking up the scoring slack that Mason’s graduation has left for this team. But that does not mean he will do it in the same way.

A much more naturally gifted shooter than Mason, with a smoother stroke and quicker release, Newman will catch defenders sleeping and get shots off even if they’re right in his face.

Mason also often had defenders right in his face, but that more often came when he initiated the action and drove right to their chests on his way to the rim. Newman won’t do as much of that, but, alongside senior Devonte’ Graham, should be able to fly up and down the floor, making this Kansas backcourt just as exciting to watch even if it’s for different reasons.

Remember when Newman first announced he was coming to Kansas how people said he could come to KU, sit out a year and still leave for the NBA without ever playing a minute for the Jayhawks?

Well, we now know that won’t be the case and, in all reality, it never was on the table.

However, there was plenty of talk when Newman was being recruited out of high school about him being a one-and-done player. Now, here we are three years later and, thanks to his transfer year, the 6-foot-3, 190-pound guard is set to enter his third season of college basketball.

With the skills, talent, good guard size and athleticism that Newman possesses, there’s no doubt that the NBA scouts already have taken notice.

But if he’s able to add to that a big year at a big program like Kansas, it will almost certainly seal his fate as a player destined to leave early for the NBA.

Like many in his position, the whole thing figures to come down to what Newman is hearing from the NBA. If told he’s a sure-fire first-round pick, he’s probably gone. But if he’s on the fringe, much like Devonte’ Graham and Svi Mykhailiuk were last season, he could come back for a second year at Kansas.

Newman seems like a smart dude with a realistic view of the world. And his family looks at things in a similar way. They’ll know if the time is right. And if he leads the Jayhawks in scoring and is a key part of a deep NCAA Tournament run, it absolutely could be right.