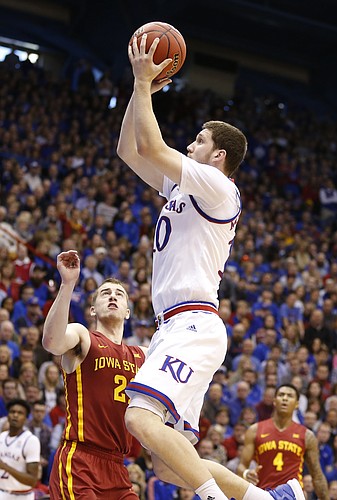 Kansas guard Sviatoslav Mykhailiuk (10) puts up a shot over Iowa State guard Matt Thomas (21) during the first half, Saturday, Feb. 4, 2017 at Allen Fieldhouse. by Nick Krug

Despite still being younger than most players on his team, sharp-shooter Svi Mykhailiuk enters his final season as a Jayhawk with a huge opportunity and plenty of motivation.

Leaving his name in the 2017 NBA draft pool until the last possible minute to pull it out, the Ukrainian guard who has improved ever so slightly during each of his three years in Lawrence will be looking to make one final jump this season, one he hopes will both help KU and impress pro scouts.

For the second year in a row, Mykhailiuk spent a good chunk of the summer playing back home with the Ukrainian national team and KU coach Bill Self said he thought the experience was good for his 2016-17 starter in that it allowed him to assert himself more and play a much different role than he has at Kansas.

Whether that carries over to his senior season with KU remains to be seen. Let’s take a look at what we can expect.

He Will: Finally look fully comfortable with his role

This one goes well beyond Mykhailiuk playing a primary role with his national team this summer and speaks more to what we saw from him in Italy.

Despite being away from his teammates and coaches for several weeks, Svi looked cool, calm and collected and like a bona fide leader when he rejoined the team during its exhibition trip to Italy in ealry August.

It’s possible that comfort level came from it being a handful of summer scrimmages on foreign soil. But it sure looked more like Svi was ready to assert himself on this team and take on the leadership role alongside Devonte’ Graham.

If he does, that should only make him more comfortable all over the floor and throughout the season, a fact that would likely lead to his best season as a Jayhawk.

He Won’t: Experience a significant drop-off from 3-point land

One of the things pro scouts said they want to see more from Mykhailiuk is a willingness to be more than just a lights-out spot-up shooter.

While driving the ball to the rim, flashing a strong pull-up game and getting to the free throw line while also improving his defense would all be signs of that, don’t expect Svi’s emphasis on impressing scouts to cut into his importance as a knock-down jump shooter.

With KU’s wide-open, fast-paced, guard-heavy style of play expected to remain for the upcoming season, Mykhailiuk, along with teammates Graham, Lagerald Vick and Malik Newman all will have the luxury of spacing the floor and catching kick-outs from driving teammates for wide open jumpers.

It’s possible that Mykhailiuk’s total number 3-pointers made and attempted might take a small dip during the 2017-18 season. But due to the fact that most of those shots figure to be wide open looks, I wouldn’t expect to see Svi’s 3-point percentage fall much, if any.

The guess here is that he’ll fall somewhere in the middle of that this season, perhaps knocking down 55-60 of 145-160 attempts.

At the start of the 2017 offseason, just after the NCAA Tournament ended, Mykhailiuk was spotted as a late first-round pick in the 2018 NBA Draft on a couple of mainstream mock drafts.

Today, on ESPN writer Jonathan Givony’s most recently updated mock draft, dated in late August, Svi sits as the 33rd player selected, with the third pick of the second round.

If that’s anywhere close to reality — and Givony’s been doing this a long time and is usually pretty locked in — the idea that Svi could move up four or five spots to crack the first round is not that crazy.