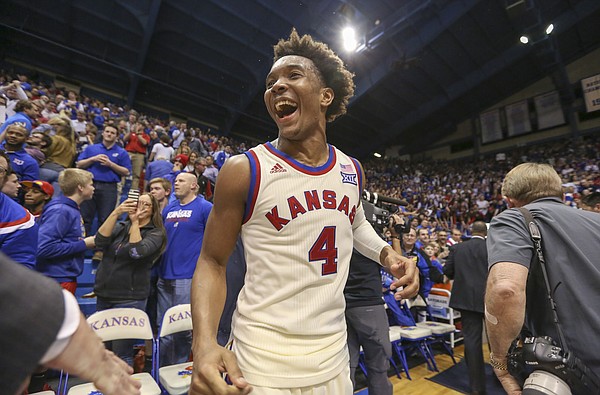 With the official start of the 2017-18 Kansas basketball season now just a couple of weeks away — Late Night is set for Sept. 30 and the exhibition opener is slated for Oct. 31 — it’s time to dive into the second year of our He Will, He Won’t, He Might series.

As you might remember — or may have guessed if you don’t — the series takes a quick look at every KU player and takes a stab at three predictions for that player for the upcoming season.

Last year was my first year doing this, and, after looking back at the 2016-17 “He Will, He Won’t, He Might” predictions, I have to admit I was fairly impressed with how I did.

From predicting that Frank Mason III would land on the all-Big 12 first team for the first time and that 3-point shooting would not be a strength of Josh Jackson’s to the fact that Carlton Bragg Jr. would leave Kansas (OK, I may have missed this one and said “He Might” leave KU to become a lottery pick), most of the guesses were either right on or at least in the ballpark.

With a 2017-18 roster that features enough returners mixed with a couple of newcomers, let’s see if this year’s effort can be anywhere close to as good.

He Will: Continue to look to get others involved before looking for his shot.

Although Graham has proven he is more than capable as a scorer, both he and his team often have been at their best when he has thought pass-first and score second.

Part of the reason for that is, when Graham is a threat to do more than just shoot, defenders have to respect that and can not just crowd him on the catch. Beyond that, Graham has great vision, is a naturally unselfish player and likes to see his teammates succeed as much as himself.

That mentality forces defenses to account for every corner of the floor and that often leaves Graham open on the back end of things for good looks from 3-point range that, at least to date, he has knocked down more than 40 percent of the time.

The whole thing falls into the old adage of, “If it ain’t broke, don’t fix it,” and, while Graham will look to emulate former running mate Frank Mason III in some areas, it won’t necessarily be as a scorer.

This one ties into the first one, but it’s not because Graham isn’t talented enough to deliver a big season. He is. And he might. But if he does it won’t look the same as Mason’s national player of the year campaign a season ago. Here’s why.

For starters, Graham is not the same kind of player as Mason. How many times, late in the shot clock, did you see Mason put his head down and drive to the rim, either to get to the free throw line or finish in traffic when the Jayhawks’ offense broke down? A ton. Graham is not as likely to do that and does not have the same physical advantages that allowed Mason to succeed in that area.

So fewer trips to the free throw line and fewer points in the paint means fewer points overall. So don’t expect Graham to approach the 20 points per game average that Mason delivered last season.

He Might: Average more assists than Mason while averaging fewer points at the same time.

Seeing how the first two tied together, we might as well tie the last one to those two, and I don’t think there’s any doubt that it is.

If Graham scores less than Mason but continues to look to set up others for easy buckets at the same time, it only makes sense to think that Graham’s assist total could be higher.

For his career, Graham is averaging 3.4 assists per game in 103 games. I’m not sure if doubling that number during his senior season will happen, but I do think it’s possible. And if he’s able to, Graham would absolutely be in line for a first team, all-Big 12 type of season and possibly a Big 12 player of the year nod.

Just don’t expect him to parlay that into sweeping the national player of the year honors like Mason did and don’t count on Graham delivering Mason’s total of 20 points, 5 rebounds and 5 assists per game.

Something like 14 points, 3 rebounds and 6-7 assists seems more likely and would be a solid, albeit completely different, season unto itself.

Best wishes for Graham. He is quite a fine representative of KU, and anyone who saw him accommodating fans at the most recent volleyball matches in Horejsi cannot disagree.

Couldn't agree more with you on this one. Graham is more likely take a 3-pt buzzer beaters than driving or passing. It's because he is confident with his leadership and taking over games when the team need him to. With Newman in the team, Graham won't be scoring that much like you said, but I believe he can average double-digit assists this season.