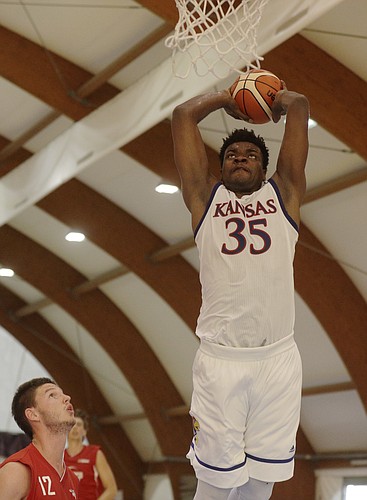 He’s arguably the most important and easily the biggest player on the 2017-18 Kansas basketball roster and he enters the upcoming season with the potential to go a number of different directions.

His name, of course, is Udoka Azubuike, and he’s KU’s 7-foot sophomore who played just 11 games last season and missed out on an outstanding opportunity to ease into college basketball with a veteran team so he would be ready for a much bigger role during the 2017-18 season.

That season is here now — practices officially began earlier this week — and, ready or not, Azubuike’s role is as crucial as any on this team.

Not only will he be asked to rebound and protect the paint on the defensive end, but KU coach Bill Self keeps talking about the big fella developing enough of a true post game to be a force on offense, as well.

If that happens, regardless of how many minutes he can play, the sky’s the limit for Azubuike, both during his sophomore season and beyond.

If not, it will be interesting to see how the Jayhawks’ thin front court and deep crop of guards works around whatever shortcomings Azubuike has.

Throughout the offseason, Self has been pleased with the effort and work Azubuike has put in to improving his body, his stamina and his game. But with the season now right around the corner, the time has come for Azubuike to take an even bigger step and prove that he can be everything this team needs him to be.

Whether that’s the case or not will play a big part in just how big the upcoming season can be.

He Will: Break a rim this season

During the two games he played in Italy, Azubuike nearly ended the Rome portion of KU’s exhibition tour by breaking/bringing down the baskets they used in the small gymnasium the Jayhawks played in.

Granted, those goals were not the same kind of goals that you see in college basketball arenas across the United States, but that was hardly the point.

Every time he gets near the rim, Azubuike tries to bring the thing down. It’s just his mindset and his desired approach and he’s very, very good at it.

Azubuike’s penchant for punishing rims showed up at Late Night last week and that was against his own teammates. When he gets into game mode, against an opponent, there will be a night — maybe one of his six- or seven-dunk nights — where the rim gets a little weak and Azubuike brings it down.

I’m not saying he’ll shatter the glass or rip the whole unit to the floor, but I am saying there will be a night when the big man’s assault on the rim does enough damage to cause some kind of delay. For my sake, I’m hoping it doesn’t happen during one of KU’s later tip-offs. And for the sake of my friends and the good people in the KU facilities department, I’m hoping it doesn’t happen at Allen Fieldhouse.

He Won’t: Be in the conversation for all-Big 12 honors unless he develops better post moves

There’s no doubt that Azubuike will be a major focal point for every team KU plays this year. And the reality of it all is that there are very few teams out there who have a player who can match up well with the KU sophomore’s size and strength inside.

That’s good news for KU and, obviously, is the reason many believe, and even expect, that Azubuike could be a double-double machine this season.

Now the bad news: He has yet to show that he can consistently make the kind of post moves needed to be a guy the Jayhawks can throw the ball to when they need a bucket from the paint.

Don’t get me wrong, Azubuike will score plenty in the paint. But the guess here is that most of it will come from penetration by KU’s guards, who, after forcing the defense to collapse, will simply throw it up and let the big guy go get it. He does that very well and should get at least a few dunks and easy buckets a game on that alone.

He also figures to get fouled a lot simply because his size in close will be too much for most to handle. So if he has improved as a free throw shooter, he should be able to get points there, too.

But the combination of foul trouble (more on that in a minute) and his inconsistency as a back-to-the-basket scorer (at least as of today) lead me to believe that he won’t quite match what his enormous size advantage says he should.

He Might: Be known as much for constant foul trouble as his monster dunks

OK. So back to that foul trouble thing.

KU coach Bill Self has talked a lot about Azubuike needing to learn how to play better defense in order to avoid foul trouble.

Self’s suggestions include, Azubuike using better footwork to guard his man; Azubuike doing more work early in the defensive possession to keep his man from getting good position; And Azubuike playing smarter when he does go to block a shot, which the Jayhawks will want him to do as often as humanly possible.

All three areas will take time. Remember, this is still a very young player we’re talking about. He turned 18 just a couple of weeks ago and, as mentioned above, only experienced this level of college basketball for 11 games a season ago.

During those 11 games, Azubuike averaged 8.7 fouls per 40 minutes, which proved to be the first red flag to announce that there might be an issue here.

Natural maturity and a better understanding of his role on the team and college basketball as a whole should be enough to get that number down. And, obviously, Azubuike is not going to play 40 minutes per game. But he can play 30, as long as he plays smart enough to stay on the floor.

Azibuike might be the most important player on KU's roster..Ku's guards will score like last year, but him being a consistent post scorer, staying healthy, and avoiding foul trouble is vital for KU's chances at a deep NCAA run..last year we saw against Oregon what NOT having an inside post presence could do as KU went cold from 3 point land and had no viable post scoring options to turn to. Next years team will be loaded with front court size and talent, but this one will be paper thin.

KU proved last year that it can win without a bonafide scoring presence in the post. My hope is that Bill Self doesn't try to turn AZ into something he isn't. Don't feed him the ball in the post anymore than what's necessary. Spread everybody else out, penetrate, dish, dunk.

Praying AZ stays healthy as well. This team can become very thin in a hurry!

Self loves the high low offense...i look for AZ to get way more inside touches than Lucas did..

I'm with ya on this, Joe.. and the following should be on our guards' minds all the time now that we have posts that can catch and finish strong:

But the guess here is that most of it will come from penetration by KU’s guards, who, after forcing the defense to collapse, will simply throw it up and let the big guy go get it. He does that very well and should get at least a few dunks and easy buckets a game on that alone.

I cant totally agree with that..yes he will get lots of easy buckets and dunks, but keep in mind that Withey wasnt the most polished post player either but Self still fed him a lot of post touches..now I know the guards Withey had were nowhere near as good as what Azibuike has..but I cant imagine Self finally having a solid post presence and relegating him to just catching lob dunks and garbage points while the guards hoist up 3s all game

He will......be gone to the NBA after this spectacular season. Go Dok! Rock Chalk Dok!

imagine the KU front court if he comes back...WOW..but if he leads KU to a FF and NC, he can leave and noone would be mad LOL

a 2018-2019 front court of Azibuike, Lawson, McCormack and DeSousa would be the best in terms of talent KU has had in a long time..probably since the days when Roy had Collison and Gooden starting with Wayne Simien off the bench or Self with the Morris twins with TROB backing them up

How old is Udoka? I thought that he was young coming into KU?

He turned 18 a couple of weeks ago, which means, when he first arrived on campus at KU he was 16.

The way this young man always tries to tear the rim down seems dangerous to his wrists/ligaments again. I hope he learned from what happened last year.

IIRC, it was caught in his practice opponent's jersey. A freak accident and hopefully not one to be repeated.

So when we need a timeout late in the game and Self is out or close to out of timeouts, can we just ave Dok destroy the basket and provide us with an automatic 10 minute break?

That basket said something mean about your mother...