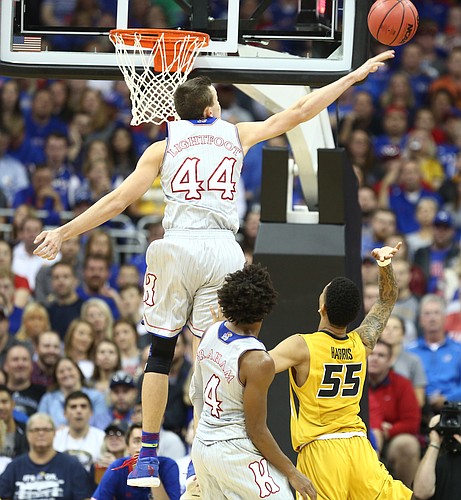 Kansas forward Mitch Lightfoot (44) rejects a shot by Missouri guard Blake Harris (55) during the first half of the Showdown for Relief exhibition, Sunday, Oct. 22, 2017 at Sprint Center in Kansas City, Missouri. by Nick Krug

Mitch Lightfoot, perhaps as much as any KU recruit in the past 10-15 years, was thrilled to become a Jayhawk and knew that the start of the 2016-17 season was merely the beginning of a long and enjoyable journey that would give him memories for life and make him a better basketball player.

And then the start of the season came and Lightfoot, because of foul trouble to KU’s regulars, found himself on the floor in crucial moments against big time programs like Indiana and Duke in marquee, showcase contests seen from coast to coast.

To say Lightfoot was not ready for those moments would be a bit of an understatement. But you never could tell from watching him out there, and his lack of experience had absolutely zero impact on his willingness to check in and see what he could do.

That was then. Now is different. And the expectations, both from Lightfoot himself and from the coaches of him, are much higher than they were a season ago.

Self has talked a lot since the end of the 2016-17 season about those moments that Lightfoot was throw onto the floor because of the team’s need. He has called them unfair and said Lightfoot never really got a chance to (a) get comfortable and adjust or (b) earn minutes because of KU’s need up front and the fact that Self and company shifted quickly to a four-guard lineup for much of last season.

Self wants the Jayhawks to return to the more common look of having two big men on the floor and Lightfoot will be a big part of that equation and whether Self will achieve his stated goal of playing two bigs “at least 50 percent of the time,” or if he’ll have to abandon the idea and play through his guards again.

Here’s a quick look at how Lightfoot might factor into answering that question.

He Will: Be the leader of the KU big men

Say what you will about Lightfoot’s size, strength, ability or experience. But don’t question his leadership skills.

Even as a freshman, Lightfoot was one of those loud voices who often could be heard screaming in practices or from the bench, trying to encourage teammates to keep fighting or to help through execute a play.

Because of the insane amount of leadership on last year’s team — namely Landen Lucas, Frank Mason III and Josh Jackson — Lightfoot’s voice often was drowned out or he simply yielded the floor to the upperclassmen.

That won’t be the case this year. Udoka Azubuike just turned 18 and does not have the luxury of being in uniform and available for a full season the way Lightfoot does. And Billy Preston is just a true freshman still trying to figure it all out in hopes of harnessing his enormous potential.

Both are better options in the frontcourt than Lightfoot in just about every way, but both will spend a fair amount of time looking to the sophomore from Gilbert, Arizona, for words of encouragement or the answers to the test, during games, in practices and in the huddle.

Even if his minutes don’t sky rocket and he’s not able to log a lot of court time, Lightfoot will be ready for this role.

He Won’t: Average more than 15 minutes per game

Even with Self interested in playing two big men more this year than he did a season ago, it’s hard to envision Lightfoot averaging more than 15 minutes of court time per game.

That’s because so much of KU’s talent is in its backcourt and Self, no doubt, will want to see guards Devonte’ Graham, Malik Newman, Lagerald Vick, Svi Mykhailiuk and Marcus Garrett log as many minutes as they can, therein giving KU a dangerous offensive lineup and putting serious pressure on opposing defenses to match up.

Because KU still will need to match up with its opponents, though, Lightfoot will play plenty and he’ll know exactly what to do when he’s in there — play hard, set screens, crash the glass and back down to nobody. Those traits all come naturally to the KU forward, who figures to get roughly 10-15 minute of rotation time and almost always will be on the floor at the end of games when the Jayhawks are closing out opponents in easy victories.

He Might: Increase his playing time if he can hit the outside shot

Lightfoot spent a ton of time this summer working on his outside shot and he has shown in exhibition games thus far a willingness to try to get the shot to fall.

That was particularly true in Italy, but, to Lightfoot’s credit, has not been the case during KU’s exhibition wins over Missouri and Pitt State.

Although he absolutely improved his jumper during all those solo hours in the gym, the skill has not translated to game settings just yet and Lightfoot, being the smart player he is, has started to back off of shooting the shots, electing instead to move the ball and get others involved.

If the jumper shows up, he could log a few more minutes as a stretch 4 of sorts for this team plagued by limited depth in the front court. If it doesn’t, the Jayhawks will be content with having Lightfoot execute all of those other subtle skills mentioned above.