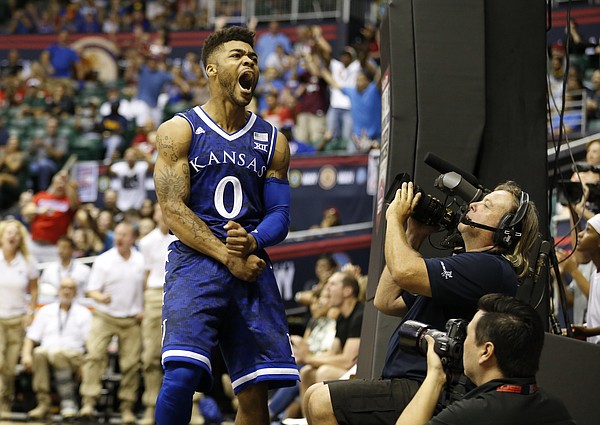 Kansas guard Frank Mason III (0) roars after an and-one bucket during the second half of the Armed Forces Classic at Stan Sheriff Center, on Friday, Nov. 11, 2016 in Honolulu, Hawaii. by Nick Krug

By now, you all know the story of former Kansas standout Frank Mason III.

From how his rough upbringing to his failed government class to that showcase in Vegas where assistant coach Kurtis Townsend first saw him and, of course, through his incredible KU career that left him in the Top 10 on KU's all-time scoring list and was capped by the point guard doing something no other Jayhawk in history had done — sweeping the national player of the year honors during the 2016-17 season.

Although stoic by nature, Mason has more personality than most realize and, throughout his sensational senior season, was able to show more and more of that as the weeks went on.

You also know the special relationship that exists between KU coach Bill Self and Mason. From player-coach to father-figure and friend, the two developed a unique bond during the past four years that at times moved each to tears and will no doubt last a lifetime.

So there's not a whole lot of new information about the Mason-Self dynamic that can be learned. I'm sure there are stories for days that could be told but probably won't be. At least not publicly. And I'm sure each guy remembers the journey a little differently, mostly thanks to the differing perspectives, one of a college-aged basketball player doing everything in his power to stay on the climb and the other of a wildly successful coach 30 years his senior.

But there's something cool about all of that — the early years, the Kansas years, the wins, the relationship with coach — in this Players' Tribune article penned by Mason and released Thursday.

Some of these are short but Mason goes deep in this one. He takes you all the way back to his youth and the good and the bad of all of it. He talks Kansas and Self and being a father and the NBA, but more than anything his story, in his words, titled, "Goodbye, Kansas," shows, in a short and sweet, 1,500-word manner the maturation process and incredible road Mason has traveled these past few years.

"It didn’t end how I wanted — after the Oregon loss, I tweeted that it felt like my life was over—and, man, it’s still hard to shake that feeling of disappointment. Sitting back in the locker room, where guys were crying and feeling terrible, I had no choice but to focus on the positives and on what’s next. Graduation. The opportunity to give my son a better life than I had growing up. I thought about how far I’d come, from being a guy who couldn’t qualify to play at Towson to the Wooden National Player of the Year at one of the best programs in the country." 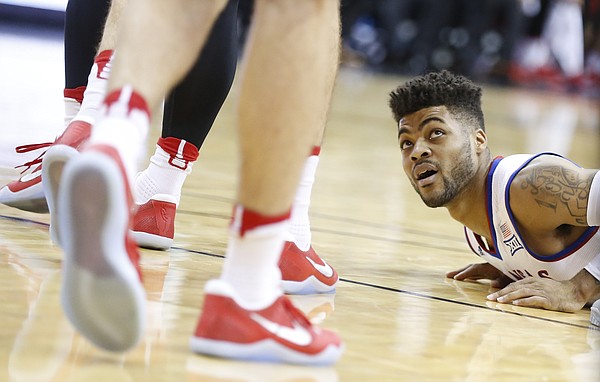 Kansas guard Frank Mason III (0) looks for a foul from an official during the second half, Saturday, Dec. 17, 2016 at Sprint Center. by Nick Krug

No KU basketball player has etched himself into the hearts of Jayhawk fans more than Frank Mason, and we've had some who have deeply etched themselves into our hearts. Trust that he will have a great future.

Frank Mason has officially gone down as my favorite all time KU player. He's everything you can ask for in a player and some. And the best part is he's an even better person. Jayhawk Nation will sure miss him and I'm honored to have seen him play. BIFM

I never expected Frank's senior season to transpire the way it did and it was over before we knew it. Even during the season, I had no idea Frank would sweep every available award.

What a season to behold, Thank You Frank Mason!!

The top picture (in the tribute article) of Coach Self and Mason says it all. Just the stoic glare by Frank and the appreciative fist bump signifying another job well done. No smiles exchanged. No words spoken. That has to hang somewhere in AFH.

In the Self era... Darnell Jackson, Thomas Robinson, and Frank Mason are the three players that KU fans seem to have loved and cared for on a level much deeper than basketball.

During his freshman year I told my wife this Mason kid was going to be a good player for KU. Never thought he'd go down as one of the greatest players to ever put on a Kansas jersey. Unbelievable, and privileged to have seen him play at KU.

And that my friends, tells you just how much a program like Kansas basketball can change a guys life. And Frank's not the only one that's had that transformation in his life, but he's certainly one we'll remember for a very long time. Congratulations on all you've accomplished and good luck in fulfilling your dreams!

At age 85, I like the KU guys as they give a person some dignity and purpose in life. I enjoy the games because we win! Mason was so great and I know he will do well for awhile with the Pros. WE just have to remember it is a game that has prestige and value to all of us who hate to lose. Bring on SEC, KY, and TexA&M and it will be great to watch again and again. GO HAWKS!!