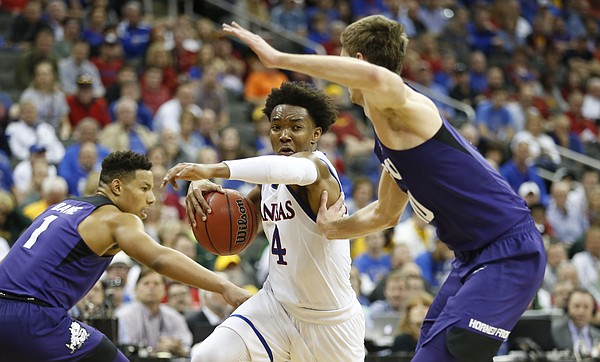 Kansas guard Devonte' Graham (4) tries to get around TCU forward Vladimir Brodziansky during the second half, Thursday, March 9, 2017 at Sprint Center. At right is TCU guard Desmond Bane (1). by Nick Krug

As KU coach Bill Self pointed out after the game, KU scored plenty of points to win this game. Even without second-leading scorer Josh Jackson, Kansas scored inside and out and topped 80 points. The Jayhawks fall just short of an A grade for their percentages. KU shot 44 percent for the game and 33 percent from 3-point range, making just 10 of a whopping 30 attempts. The plus comes for KU’s .815 clip (22 of 27) from the free throw line.

The Jayhawks may have scored 82 but they also gave up 85 to a team that finished eighth in the conference and, as of today, still isn’t in the NCAA Tournament field. It was so much the fact that KU gave up easy buckets and lots of points to the Horned Frogs as it was the way they did it. TCU got a ton of easy looks, got to the basket with ease most of the night and .492 for the game and .567 in the first half. Not the kind of defensive effort KU wanted or needed, but at least part of it could be chalked up to the fact that two of KU’s worst defenders — Svi and Lagerald Vick — were asked to handle the workload of one of their best in Jackson.

Landen Lucas was terrific and did all he could to help this team win. He shot 5-of-7 from the floor, tallied 13 points and 14 rebounds and grabbed a game-high six offensive rebounds. One problem: The Jayhawks got just one other offensive rebound the entire day. Beyond that, Carlton Bragg Jr. and Dwight Coleby struggled to make an impact in their 18 combined minutes on the floor. Lucas was better than those guys were bad, though, and that salvaged the C grade.

Frank Mason was the man once again, but he clearly can’t do it all by himself. Svi chipped in with 13 points in the first eight minutes but then finished with just five points the rest of the way and made a couple of costly mistakes late. Vick did OK at times on both ends, but never really seemed to be into the game, a possible result of him being asked to play Jackson’s spot at the 4 instead of his normal position and role as this team’s sixth man. Devonte’ Graham could’ve done a lot to help this team but shot just 2-of-10 from the floor and did not attempt a 2-pointer. KU’s guards recorded just three steals while TCU guard Alex Robinson swiped five himself. Mason was A material but the group as a whole was not nearly as good and clearly missed Jackson.

Coleby blocked a couple of shots (on the same possession) and delivered a nice bucket in the first half on a strong post move. He also picked up a steal and used his three fouls wisely in 6 minutes. Those facts were the only thing that saved KU’s bench from an F on a day when the TCU bench outscored KU’s reserves, 34-3. Mitch Lightfoot turned it over once in his lone minute of play and Bragg missed four shots, including an airball at the end of the first half and a free throw while also turning it over twice. With Vick forced into action for the suspended Jackson, KU’s bench took a major hit.

It's a shame that none of our underclassmen are stepping up to support the solid play of Mason and Lucas down the stretch. Graham to the NBA??? I don't think so.

Bragg yes, Svi I would like back. Fact is, he went out and scored 18 points, first half second half, what the heck, if Graham makes 6 more points, we win the game, And yes Svi made a mistake at the end, but so did Frank with the crazy lob. Fact is like coach said, we were up by 4 points with 2 minutes to go, and then we just did nothing right from then on.

Svi has averaged nearly 10 points a game, not an easy thing to replace if he goes. His overall game is better, he still needs to be better on defense. Teams are just going at him, because they realize this. Next year even if he stays, he will have to be smarter on defense, or he may well be coming off the bench.