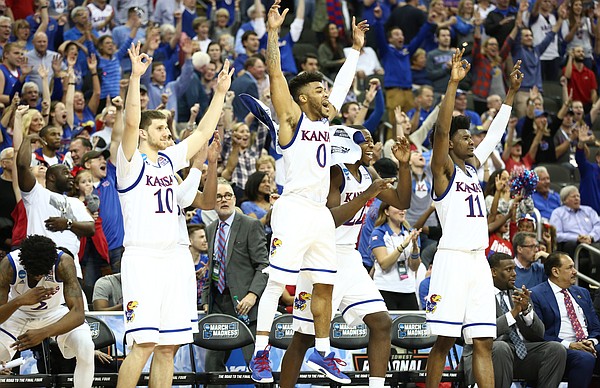 The Kansas bench reacts to a three pointer by Kansas forward Mitch Lightfoot late in the second half, Thursday, March 23, 2017 at Sprint Center in Kansas City, Mo. by Nick Krug

Note: I tried not to grade this game in the context of it being a packaged deal with the two that came before it, but it was awfully tough to do.

Unless you’re mad at Landen Lucas for shooting 50 percent on 1-of-2 shooting from the floor, there’s absolutely nothing you can nitpick about this performance.

KU shot 55 percent from the floor for the game, 67 percent in the second half, and finished 15 of 28 (53.6 percent) from 3-point range on a night when it simply chewed up and spit out the Boilermakers with a heavy dose of Kansas offense.

Hate all you want on the free throw shooting (15-of-22), but even that was a percentage point higher than KU’s season average and the Jayhawks are still shooting 81 percent from the line this tournament. Oops. There’s my first slip up.

The Jayhawks struggled to close out on shooters early in the game and offered little resistance to Purdue’s big men when they got it close to the basket. Luckily for the Jayhawks, the Kansas guards were up to the task of both out-shooting the Boilermakers (by a long shot) and helping the big men protect the paint.

The effort on the bigs, graded as a whole, was worthy of an A. But KU’s early effort against Purdue’s 3-point attack dropped it into the B range, just barely. We’re talking 89.475 percent here.

Landen Lucas played much bigger and better than his 2 points and 4 rebounds will show. And his body will remind him of that tomorrow. But give Dwight Coleby and Carlton Bragg Jr., credit for having Lucas’ back on a night when he picked up two tough-luck fouls and checked out of the game at a crucial time after getting his third.

When you’ve got three of the best players in the entire tournament starting in your backcourt and two complementary players who can combine for 22 points, five rebounds, two assists and three steals the way Svi Mykhailiuk and Lagerald Vick did on Thursday, it’s almost just not fair.

Frank Mason III and Devonte’ Graham were great on both side of the floor and Josh Jackson was right there with them to help move Kansas within one victory over a trip to the Final Four.

Vick had a couple of difference-maker moments — that dunk, a 3-pointer and a couple other drives to the rim — and Coleby and Bragg were solid in relief of Lucas.

Add to that the fact that Tyler Self and the walk-on crew checked into an NCAA Tournament game for the third consecutive game (oops, slip-up No. 2) and you’re looking at A material.

Josh seemed to really be pressing early in the game, but it was sort of encouraging that with as bad as he started, the game was still reasonably close. He, and the team as a whole all seemed to learn through the first quarter and then totally turned the table.

I thought it was also noteworthy that Tyler's crew came on (serenaded by the Chant - Ya Baby!) with 2 minutes to go, and actually had to run the offense, and played solid D. Impressive.