Josh Jackson's Phoenix debut one for the all-time blooper reels 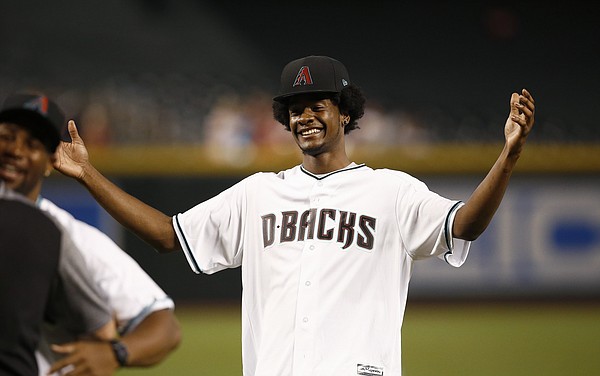 Last Friday night, at a ballpark full of more than 30,000 Arizona Diamondbacks fans, the baseball crowd was treated to a little basketball flavor when former Kansas standout Josh Jackson was invited to toss out the ceremonial first pitch.

Jackson, who was the No. 4 overall pick in last Thursday’s NBA Draft by the Phoenix Suns, was there, decked out in a Diamondbacks jersey, ready to meet his newest fans and have a little fun.

The fun certainly came, but not exactly in the way anyone was expecting.

If you haven’t seen or heard anything about this, you simply have to keep reading. If you have, it’s probably worth revisiting because the whole spectacle was so hilarious.

From his spot on the mound next to Haason Reddick, the first-round pick of the Arizona Cardinals in last spring’s NFL Draft, Jackson waved to the crowd and then prepared to fire his pitch.

That’s where it all fell apart.

Jackson was a good sport about the whole thing, but this was 50 Cent bad. And Jackson knew it.

Despite the toss conjuring up memories of Bob Uker’s famous call of “Juuussssssst a bit outside” from the movie Major League, Jackson doubled over in laughter and then walked off the field explaining exactly what went wrong to the Diamondbacks player designated to catch the pitch.

“I shoot basketballs,” Jackson joked while making the motion of shooting a jumper.

Later in the night, Jackson was again at the center of the Diamondbacks’ fun when he exchanged hats with the D-Backs mascot, D. Baxter the Bobcat, whose oversized hat fit over Jackson’s hair much better than the MLB issued hat he had been wearing.

None by Arizona Diamondbacks

Clearly, Jackson already has made steps toward endearing himself to the Phoenix community and, a day later, he was at a Suns outreach event working with young people at a basketball camp in the area.

That was funny. I can't understand how a guy as athletic as Josh doesn't know how to throw a ball. That wasn't nerves. That was flat-out no clue how to throw!!

They should have given him a basketball for the first pitch. He can rifle one of those the sixty feet to the plate with only one hand.

As today's youth would say:

Juuuuuuust a little outside.

I'll play soccer & ultimate Frisbee and avail myself pretty well. I'll play volleyball if it's for fun. You will never ever see me play baseball or softball from now until the day I leave this Earth for just this reason as delineated above. If my son wants to play baseball when he's older, he ain't gonna learn it from me!