Landen Lucas ready to tip off his time with the Celtics 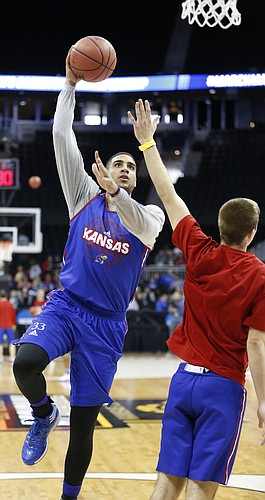 Kansas forward Landen Lucas (33) turns for a shot during a day of practices and press conferences prior to Thursday's game at Sprint Center in Kansas City, Mo. by Nick Krug

With recent draft picks Josh Jackson and Frank Mason III preparing for their first taste of life in the NBA during their upcoming summer league sessions, former Jackson and Mason teammate Landen Lucas will be beating both draftees to the punch.

Lucas, an undrafted free agent center with the Boston Celtics’ summer league squad, will kick off his extended tryout today in Salt Lake City, when the Celtics take on Philadelphia at 6 p.m. central time.

Lucas is one of just three players on the Celtics’ summer league roster who stands 6-foot-10 or taller — Boston’s 2016 first-round pick, 7-footer Ante Zizic is another — and he will be wearing No. 63 in green and white.

A couple of quick tidbits about Lucas’ situation heading into his first crack at pro basketball:

• Although Lucas’ ultimate dream is to play in the NBA, this is far from a Celtics-or-bust situation for the former Jayhawk. Lucas entered the draft process with heavy interest and even guaranteed offers from a handful of foreign teams and would no doubt be scooped up quickly overseas if things don’t work out in Boston.

• Lucas is the only player in this year’s draft class on the Celtics’ entire summer league roster who went through an individual workout with the team prior to the June 22 draft. Celtics boss Danny Ainge has long been known to appreciate toughness, maturity and character in the players he signs and drafts and Lucas grades out highly in all three areas.

• One thing worth keeping an eye on with Boston is the status of free agent forward Gordon Hayward. If Hayward decides to sign with Boston, likely on a max deal or something close to it, the Celtics would have much less room under the salary cap and could be looking to fill the final couple of spots on their roster with less expensive options. Hayward to the C’s certainly would not guarantee Lucas anything. And he likely remains a long shot to make the roster anyway. But Boston adding Hayward would be noteworthy for Lucas provided he plays well during the next couple of weeks.

• Boston will play in two summer league sessions, with the first running July 3-6 in Salt Lake City and the second coming July 7-17 in Las Vegas. Mason and Jackson will kick off their summer league careers Friday in Vegas against one another.

• As for his work with the Landen Lucas Foundation, it continues at full speed even with its namesake busy trying to catch on in the NBA. The foundation already has given out nearly 40 scholarships to young people in Lawrence and continues to search for ways to raise more money to sustain the vision and help as many local children as possible in their quest to get involved with their chosen sports. The Foundation’s goal is to raise $100,000 and give away 200 more scholarships in the next year.