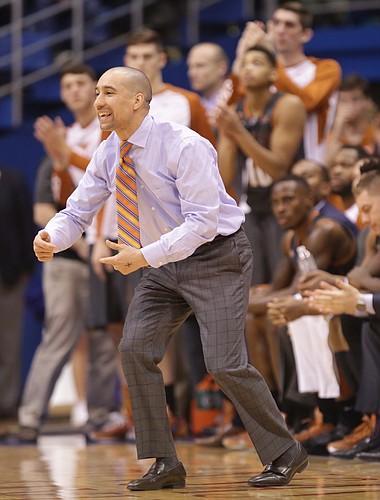 Texas head coach Shaka Smart directs his defense during the second half, Saturday, Jan. 23, 2016 at Allen Fieldhouse. by Nick Krug

The 7-11 Longhorns, who will take on second-ranked Kansas at 1 p.m. Saturday at Allen Fieldhouse, got out to an up-and-down start to the season and now are riding a 1-5 Big 12 record and four-game losing streak into their meeting with the Jayhawks.

On paper, the game looks like a mismatch. Wildly talented and explosive Jayhawks against young, still-finding itself Texas team. Kansas and its 86 points-per-game average, against Texas, which is not even cracking the 70-point mark on average. Veterans named Mason, Graham, Lucas and Self against many players most of the Big 12 hasn’t even heard of yet.

You get the point.

And there’s a chance the game will turn out to be exactly that — a mismatch. After all, it will be played in Allen Fieldhouse and the Jayhawks sort of seem to be due for an easy victory.

But it's not exactly a given that the Longhorns will prove to be that. In the five losses suffered by Texas in Big 12 play so far this season, only one has come by double figures (Tuesday’s 74-64 loss at No. 6 Baylor) and three have come by three points or less.

Those tight games, though encouraging, seem to be creating mixed emotions in the Lone Star State. On one hand, Smart and company are happy their group is competing and not just using its youth and inexperience as an excuse to roll over. On the other hand, the Longhorns still are coming up short in far too many key areas to allow them to get over that hump.

Smart, who was 163-56 (.744) in six seasons at VCU before taking over at Texas, has a pretty cool philosophy on how to take his team from a group that will play you tough to a team that will compete with the best of the best in the Big 12. And it has much more to do with relationships than it does basketball.

“It’s just deposits in the bank, really,” Smart said earlier this month on the Big 12 coaches teleconference. “You’re putting a quarter in the piggy bank, but if you can keep doing that then, over time, you can build a level of connectivity and that’s really what we need to get to.... Any time you have a lot of changeover on your team, as we did from last year to this year, the more you can spend time together as a group and just get to know one another, be around each other in different settings, I think that can be a powerful thing.”

With the athletes Smart is able to attract to Texas and the system he utilizes, along with his personal track record of success, including the 2011 Final Four run, establishing this as the UT foundation could wind up going a long way in determining whether or not Smart is successful in burnt orange.

If this approach takes, and it’s far too early to predict whether it will or won't, it could be only a matter of time before Texas returns to its spot near the top of the conference standings each year and presents Kansas with a true, year-in and year-out challenger for Big 12 supremacy.

If it doesn’t, you have to wonder if Smart will last in Austin.

But regardless of which way it turns out, no one will ever be able to say Smart is attacking this job anything other than his way.

“It’s always a balance because, a lot of times in today’s world, people mistake accountability for negativity,” Smart said of his approach to rebuilding with a young group. “I think it’s important to show guys where progress has been made and where they’re doing things well individually. Our guys, like most guys at the college level, they want to win and they want to do well individually.... For most college basketball players, typically you go through November and early December and (think) ‘This is a little harder than I thought,’ both on an individual basis and team-wise. We just have to help them understand we can do it, we’re making progress and, with a young group, we just gotta stay focused on growth.”

Asked what part has proven most difficult as he has limped out to a 27-24 start to his career with UT, including a .500 record (12-12) in Big 12 play and 21-7 mark at home, Smart pointed to his team’s lack of experience and leadership as the biggest obstacle.

“Just the understanding of what goes into winning and what goes into success, both as a team and also individually,” he said. “You just have a better understanding of that if you’ve played more games and we’ve got a lot of guys on our team that haven’t played many college basketball games so you have to coach them through that and try to accelerate that growth process. But when you understand what’s gonna allow you to be successful, now your talent can take over and you can go do the great things on the court that you’re capable of doing. But when that understanding is not all the way there it almost can serve as a block (that gets) in the way of you being your best.”

Shaka is a fraud. He's had one good tourney run. ZERO conference titles in the Colonial and A10.

Barnes handed him a team with as many top 100 recruits as anyone in the Big12. They weren't rebuilding. They're just badly coached.

I wouldn't go so far as to call him a fraud, but would say over rated. He leveraged a very lucky win over KU in San Antonio, which took him to the Final Four in Houston into a nice contrast at UT. Barnes was very popular amongst many of the UT alums, even though he could never beat Kansas out for the title. There were a lot of people at VCU happy to see him go.

The thing that sucks most about that tourney run is that it came at our expense. Still makes me mad that we lost in the 2011 Elite Eight to bleeping VCU. That could have been US playing UConn for the 2011 title!

The Morris Twins also came into the Game Cocky and Over Confident! Shaka is also a "Cheese Head" born and raised near Madison, Wisconsin!

Doesn't look like much of a rebuilding job. If anything it looks like the UT program is coming to pieces.

Way too early to call him a bust. His recruiting class next year looks solid. Too bad he'll likely lose Allen to the NBA.

Even if he ends up turning the Texas program around in time, and he just might do so, it's admittedly nice to see Smart "smart" a bit after the comments he made about beating KU in the tourney when he was on the podium accepting his new job at UT. Not as easy as you thought it would be, is it Shaka? Harder to garner respect from prima donnas in a good league, isn't it? Feeling the pressure from all the oil tycoon benefactors? For the good of the league, lets hope he makes Texas competitive again, but him eating crow is priceless. Hope we beat his team by 40.

I wouldn't say Texas hasn't been competitive, they only missed 3 NCAA tournaments in the past 25 years and have a good streak going into this year. It has been a while since they shared part of the Big XII crown, but KU's kind of been a little selfish with that honor.

I hope we hang a hundred on them.