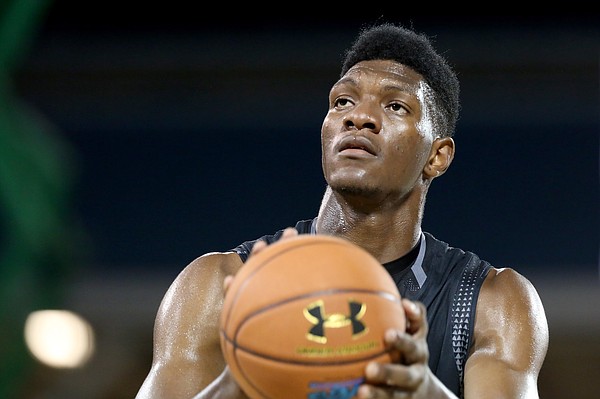 In what will go down as the final game of his prep career, newly eligible Kansas big man Silvio De Sousa delivered a monster effort and nearly led IMG Academy to victory in a clash with fellow prep powerhouse Oak Hill Academy in Saturday's Chick-Fil-A Classic championship game in Columbia, S.C.

De Sousa's squad fell 73-71, but the 6-foot-9 future KU forward, who learned Friday night that he had completed all of the coursework and received the necessary grades to join the Jayhawks next week, more than did his part to give his team a chance and end his IMG career on a high note.

In 31 (of 32) minutes, De Sousa delivered 25 points and 11 rebounds while also recording two blocks, two steals and an assist. The high-energy, aggressive power forward drained 9-of-18 shots from the floor and also hit 7-of-8 free throws.

While he does not figure to see numbers anywhere close to those during his time with the Jayhawks — particularly this season — De Sousa displayed plenty of skills that will help the 14th-ranked Jayhawks immediately even if he only plays 10 or so minutes per game.

He plays with a motor that never stops and that style led to several of those 11 rebounds on Saturday night, as he often gathered his own misses for second-chance points or hit the glass to clean up misses from his teammates.

Although his 6-foot-9, 245-pound frame and chiseled look might suggest otherwise, De Sousa moves well and has a fluid style that make him a handful on offense and a capable defender of players big and small.

ESPN broadcaster Fran Fraschilla, a well-respected international talent evaluator, told the Journal-World back when De Sousa committed that the one area that he thought the IMG big man might need the most work was with the ball in his hands on offense.

“He tends to want to make plays off the dribble sometimes, in the open court, and can get a little ahead of himself,” Fraschilla said. “But I find that stuff to be very coachable.”

Again, such moments are probably not going to present themselves to De Sousa that often at KU during the rest of the season, thus limiting his potential for mistakes and increasing the odds that he will find some type of niche role to focus on and try to perfect.

But if he's able to be the kind of player who can clean up misses for easy points, hit the glass on both ends of the floor and — gasp! — possibly even get to the free throw line, De Sousa will get decent minutes right away and only see them increase as he gets more comfortable with KU's style and system.

In related future-Jayhawk news, De Sousa spent a fair amount of time matched up with Oak Hill power forward David McCormack in this one and McCormack more than held his own.

The Class of 2018 big man, who will report to Kansas next summer, tallied 14 points and 11 rebounds in 30 minutes. He finished just 6-of-15 from the floor and was one of four Oak Hill players to log 30 minutes or more.

Here are a few recent highlights of De Sousa's from the Chick-Fil-A Classic and one from McCormack at the end...

None by Scorer Highlights

None by Scorer Highlights

None by Jason Jordan

None by Jason Jordan

A year removed from his graduating class would mean 1.5 yrs min.

At the minimum, yes.

Also, I hope Self uses him as a PF and not as a Center.

Dedric Lawson (sitting out) is suppose to be the gem of the players for next year. He will be the starting forward, so may not have a traditional center if Udoka leaves after this year. 3 guards and two big forwards.

I know there's a chance he leaves but he's so young he really should stay another year.

It is sooo silly to think that a 7 footer with the size and skill of Dok will stay any longer than necessary. Yes, there is still plenty of development left on such a young player, but he's already showing so much of his progress that there's no way he's not a millionaire by this time next year.

Aggressive rebounds that lead to fast break opportunities, quick moves that result in steals or stops and offensive boards leading to and ones or two foul shots? And he can make the shots? High motor and energy? Along with Cunliffe off the bench we could have the makings of mini runs while resting our seniors and Udoka. Win-win times six and a half. His Allen welcome will be awesome to see and hear.