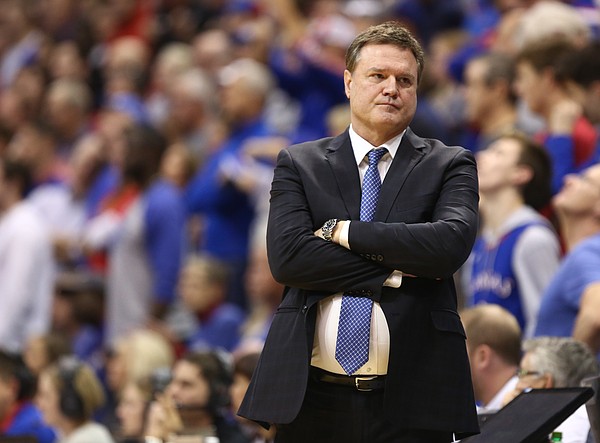 Kansas head coach Bill Self shows his frustration during the second half, Sunday, Dec. 10, 2017 at Allen Fieldhouse. by Nick Krug

In Bill Self's 15 seasons at Kansas, the Jayhawks have lost three games in a row just twice.

Three other times the Jayhawks thwarted potential three-game losing streaks by stopping the slide at two games with convincing victories the next time out.

But while those numbers sound somewhat astonishing, it's worth pointing out that, in both of the instances when the two-game skid turned to three, Game No. 3 was on the road, which will be the case Saturday night, when the Jayhawks travel north to Lincoln, Nebraska, for a 7 p.m. showdown with the Cornhuskers.

The last time Kansas faced Nebraska on the heels of back-to-back losses was during the 2005-06 season, Self's third at KU. That game followed a home loss to Kansas State and an overtime road loss to Missouri. And the Jayhawks took out their frustrations from those two setbacks by drubbing the Huskers, 96-54 at Allen Fieldhouse.

While none of those past performances have any real bearing on this team or its current skid, the two road losses that turned losing streaks from two games to three are worth noting given the location of KU's next game.

Sure, the two Oklahoma teams that handed Kansas a third consecutive loss — both in Norman, one in 2005 and another in 2013 — were better than the current Nebraska team. But the one major difference that makes this week's game such a challenge is the fact that Saturday will mark KU's first true road game of the 2017-18 season. By the time those past KU teams faced and lost to OU, they had played plenty of road games.

For what it's worth, KU endured eight two-game losing streaks in the 15-year Roy Williams era that preceded Self, and two of those also turned into three-game skids, with the 1993-94 team dropping three in a row to Oklahoma State, Missouri and Nebraska, and the 1988-89 team (Williams' first at Kansas) losing eight in a row from Jan. 28 through Feb. 24 of 1989.

With that in mind, here's a quick look back at the five previous two-game losing streaks under Self.

Two true road games and a team full of freshmen — even if Andrew Wiggins and Joel Embiid were two of them — makes this the least surprising of the two-game losing streaks. But don't let that New Mexico score fool you. That was a tougher game than the final score indicates.

This stretch featured the Marcus Smart back flip at Allen Fieldhouse and Self dropping the now famous Topeka YMCA line after a miserable performance in Fort Worth, Texas. KU snapped the skid with a 21-point home whipping of Bruce Weber's K-State Wildcats, two days after falling in Norman, Oklahoma.

Another freshman-heavy Kansas squad — which featured a bunch of future national champions — struggled in two games in three nights against its top two rivals but stopped the skid at two games with a thrashing of Big Red. The KSU loss snapped a 31-game KU winning streak over the Wildcats and the Mizzou game was the one where Christian Moody missed two free throws with four-tenths of a second to play in a tie game. That's how close KU is to having just five two-game skids in Self's 15 seasons.

Game winners in the final seconds by Tech's Darryl Dora and ISU's Curtis Stinson delivered two emotionally draining losses and KU responded by scoring just 22 first-half points in a loss in Norman. The Jayhawks dropped four of their final six Big 12 games during this season yet still won a share of the Big 12 title. KU barely avoided dropping a fourth straight game with a two-point home win over Oklahoma State, six nights after the OU loss.

This mini-streak started with Self's 12th-ranked squad falling to No. 10 OSU in his first trip to Oklahoma State as the leader of the Jayhawks and ended with a KU win in the first game in which Kansas wore red uniforms at Allen Fieldhouse.

Looking at the schedule when it first came out I felt pretty good that we could handle our business against the Cornsuckers. Now, after losing two in a row, I don't feel so good about it. The chemistry I thought these guys had developed seems to have evaporated, and their confidence with it; and there's no sign that the Billy Preston issue will ever be resolved. Meanwhile, you don't think NU coach Tim Miles is going to be in desperation mode, what with the poor seasons he has had at NU, and new AD Bill Moos hovering over him like a vulture?

In short, Saturday night's contest is a must-win game for these Jayhawks.

And nobody wants this win more than I do. I have a brother-in-law who is a big Cornsucker fan, and if KU falls to NU, I'll NEVER hear the end of it when I go back to Kansas for Christmas.

Bryce, i share your concern but I think a positive note to consider is that, at last, Sam will be available to lend energy, defense, athleticism and depth to the back line. By the way, I've got a similar bragging rights deal with a brother and a sister-in-law who went to Iowa State. Football has been hell for a LONG time!

Bryce keeping it real as usual. Just feel sorry for your sis.

LOL, it's all good. Aside from his NU loyalty, he is a good man and takes good care of my sister. I am happy for both of them and was glad to be a groomsman in their wedding. I just want bragging rights over him on this KU-NU game, that's all.

Over the years I have come to realize, like it or not that the regular season means nothing. Sure as KU fans it gives you a time and moment to push you chest out but long term who cares about the regular season. It comes down to March and a six game season. Heck if the regular season means so much to people then 1988 was a disaster. The regular season KU went 20-11. I am sure we all remember that and the 11 teams we lost too. No we don't. All we remember are the six games in March that we won and won the National Championship that year. Or how about the regular season a few years ago that we go 29-2. Awesome regular season. Incredible team. I am sure we all remember that as well. No we remember what happened in March when we lost to Northern Iowa in the second round. My point is that as much as we worry and have concern that KU has lost two games in a row and our defense is horrible. If you win in March these problem go away. My definition of winning in March is making the Sweet 16 every year. No excuse. I understand the Northern Iowa's, Bucknell, Bradley, etc.... happen but they shouldn't when your Kansas. Your one of the ELITE programs in college basketball. Every 5 years at least two final fours and every 10 years one national championship. Maybe my bar is high but I don't think it's unrealistic.

As you said these past results have no bearing on this team but it's a great article. Thanks Matt.

One thing that is new about this year is Self getting close to desperation mode with five guards up chukking at the end of the games and the uncoordinated press.

Glad you enjoyed it. I thought it was very interesting and incredible to think about.

I cant see KU losing 3 straight BUT, unless they get more size, losing 2 in a row a few more times could be a real possibility

I couldn't disagree more. It's not the record, it's whether or not you develop the chemistry and team skills that make a long run in the tournament. Another major difference is that the 1988 team was built by Larry Brown, to be Danny and the Miracles. They had to play as a team, because they were not super-talented except for Danny.

Big difference between recruiting in those days and now for us. The bar is definitely higher now. Our model is much more the 2008 team than the 1988 team. That team won the conference, and the conference tournament, and the national championship.

So yes, we want it all. I want the 14th very much, because that will last in college basketball history.

I want the 14th very much, because that will last in college basketball history.

It would be a nice record to have, nice to break UCLA's break. But honestly, aside from basketball historians and die-hard UCLA fans, who remembers how many consecutive Pac-8/10 titles UCLA won? Nobody. They only remember the national titles.

Nobody outside of Kansas cares how many times in a row we win the Big 12. All they remember is who won the national title and maybe who got to the Final Four. I would gladly trade every conference title Bill Self has won to be like Michigan State with all their Final Four appearances, or like Connecticut with their four national titles in fifteen years.

Just out of curiosity on Cunliffe, why did he transfer from ASU? That team is looking pretty good. Kind of makes me wonder how good he'll be. With the number of seniors on ASU graduating after this season I would think that if it was playing time that he'd get his share there next season. KU is going to have some very nice guards next season. If it was about playing time it is possible he could be limited as well depending on how well the others play. Thoughts?

Doesn't take much time to look up that he was starting and playing around 25 minutes per game in his half season at ASU. Playing time wasn't the issue.

No it doesn't take much time but you did not answer my question. Why did he transfer? So what was the issue if you got the time.

Nobody has done less with more than Bill Self

Except his record in the tournament among the "big dogs" is top 3 in the nation and Duke has had more early tournament upsets in the last 10 years than we have.

But Duke has won the title twice since we won our most recent one. And so have North Carolina and Connecticut.

Nobody not named Jim Boeheim or John Chaney, that is.