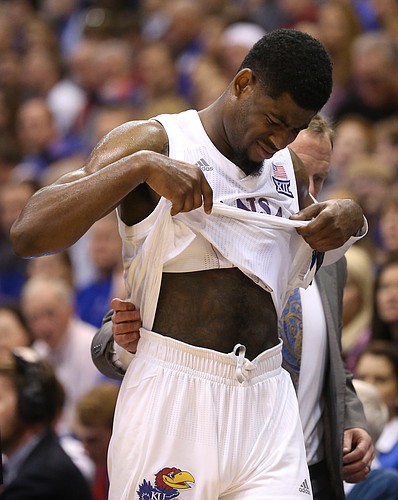 Kansas guard Malik Newman (14) leaves the game with a concussion during the second half, Sunday, Dec. 10, 2017 at Allen Fieldhouse. by Nick Krug

Newman left Sunday's 95-85 loss to Arizona State late in the game after taking a knee to the head and winding up down on the floor for several minutes.

Self said after the loss that he was told Newman had suffered a concussion and Roberts indicated that Newman's condition had improved in the 24 hours since KU's loss.

“He's got a bit of a headache and that stuff,” Roberts said midway through the show. “But he seemed to be doing a little bit better.”

As for whether Newman will be ready in time for Saturday's 7 p.m. game at Nebraska, Roberts said the team was hopeful that Newman would be ready to go for KU's next game.

“Yeah, hopefully he will,” Roberts said. “He's got a few days here. (He'll) just take some time and everything, but I think he took a pretty good shot there when he hit his head on the guy's knee.”

Newman, who is in his first year of eligibility with Kansas after transferring from Mississippi State following his freshman season, has started eight of nine games for the Jayhawks (7-2) and is averaging 11.6 points and 4.4 rebounds in 29.4 minutes per game while shooting .405 from 3-point range.

If Newman is unable to play — or even if he is limited in any capacity — freshman guard Marcus Garrett, who started the one game that Newman did not, likely would receive an increase in his minutes.