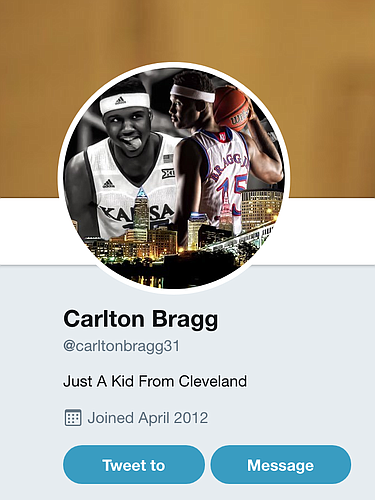 An old Kansas basketball friend jumped into the limelight a little bit via social media on Sunday, as his new team, Arizona State, was in the process of knocking off his old team, KU, at Allen Fieldhouse.

Despite not even being eligible to play this season, and with a personal matter taking him away from the ASU team altogether, Bragg clearly was watching Sunday's showdown between his new team and his old squad.

And he had no problem sharing his allegiances to the Sun Devils, which, as you might expect, riled up more than a few Kansas fans on Twitter.

But to expect him to do anything else would be foolish. Even though things did not end well for him at Kansas, Bragg's departure was not viewed as a devastating blow to the KU program, nor did it come with any kind of public negativity or sour grapes on the part of Bragg or the Kansas basketball program.

So, really, it hardly seems like that big of a deal for a college kid to hop onto Twitter to have some fun at the expense of his old team while his new team was playing well. But, clearly, not every KU fan saw it that way.

The first Bragg Tweet came around halftime, when ASU had trimmed KU's early 13-point lead down to the three.

None by Carlton Bragg

That Tweet was met with plenty of jabs from KU fans, most of them calling him out for not playing in Sunday's game or being a disappointment while he was in a KU uniform. And others could not help themselves and pointed to Bragg's off the court issues from a season ago.

Later, after Arizona State had sealed the 95-85 victory, Bragg chimed in again, this time with a simple message in support of his new team accompanied by the emoji of the head with a zipper over its mouth.

None by Carlton Bragg

Naturally, the salt in the wound that came after their team's loss to Bragg's new bunch did not sit well with Kansas fans who chose to engage Bragg — @carltonbragg31 — on Twitter on Sunday.

But by far the most curious thing about the whole encounter, which was pointed out plenty of times in the replies to both of Bragg's Tweets, was the fact that the former KU forward from Cleveland still has two pictures of himself in a Kansas uniform as his Twitter picture.

That seems more than a little strange.

Even though Bragg has not yet played a game for the Sun Devils — and it's a legitimate question if he ever will — surely there's a regular Joe picture of him on campus or back home that would be a good replacement for the KU pics.

Hey, to each his own, I guess.

Is he even with ASU anymore? The tweet didn't bother me so much. 1.) He wasn't very good when he was here, 2.) he was also a distraction, and 3.) he should support his new team 100%. If in fact he's still enrolled there.

I'm surprised someone didn't congratulate on him on getting phone access back since his recent departure from drug rehab.

Just as pathetic as his KU girlfriend was. Good riddance.

he better hope he isn't there next season when KU comes to tempe..ASU is losing 3 key seniors while KU will come in finally having some front court depth and loaded with talent...KU will more than repay ASU for this fluke of a loss..bank on that

THAT'S RIGHT! I forgot we were going there next year. And we're bring SAM!!!

Don't worry he will be on Cops soon