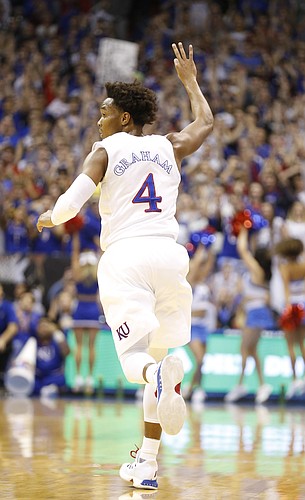 Kansas guard Devonte' Graham (4) raises his hand after hitting a three during the first half, Monday, Feb. 27, 2017 at Allen Fieldhouse by Nick Krug

In case you missed the announcement on Tuesday, you might want to sit down before you read this.

The Final Four, as we know it, is changing.

No, the NCAA is not reseeding the teams when they get there (a great idea); no, they haven’t decided to limit the rotation of Final Four sites to New Orleans, San Antonio and Indianapolis (an even better idea); and, no, they aren’t turning college basketball’s grand finale into three best-of-three series showdowns to make it more closely resemble the NBA playoffs (a terrible idea, one I’ve never heard suggested and I don’t even know why I wrote it).

In the interest of clarity, it should be pointed out that the Final Four itself is not actually changing at all. But the Final Four experience, the weekend of hype and excitement and music and contests and give-aways that surround the main event is adding a wrinkle that figures to draw some interest and up the fun level for fans and players alike.

• Intersport, a marketing company based out of Chicago, on Tuesday announced the creation of a 3-on-3 tournament at the Final Four, which Intersport will host. The event will be dubbed the “3-on-3 College Hoops Invitational.” Sounds cool. But it gets better.

• The participants will be current seniors who have exhausted their college eligibility — i.e. did not reach the Final Four with their teams — and teams will be formed with members of the same conference playing together. Think Frank Mason III teaming up with fellow Big 12 seniors Monte Morris and Deonte Burton had they created this event last year.

• The rules will be standard, international, 3-on-3 rules: one point for a basket inside the 3-point line and two points for a bucket behind the line, with 12-second shot clocks and games played to 21 or whichever team has the highest score after 10 minutes of play.

• Each team will feature four players, three starters and one substitute, and, together, they will be competing in a three-day bracketed tournament — March 30-April 1 in San Antonio — for a cash prize of $100,000. Think about that as a graduation present — all four players on the winning team receive $25,000 apiece. Pretty sweet!

David Worlock, NCAA director of media coordination, told CBS Sports that the Intersport event was in no way directly associated with the NCAA or the Final Four, which is what allows the existence of a cash prize. Intersport also is the company that puts on the dunk contest and 3-point contest held in conjunction with the Final Four each year for the past 29 years.

This event is the latest to join the 3-on-3 craze that has reemerged as a big player in the game of basketball. The 3-on-3 format was added to the 2020 Olympics, of all places, and The Big Three event, created by Ice Cube and featuring some big and bright names from the NBA’s recent past, was a hit with fans, both in person and watching from home.

“The game of 3-on-3 basketball continues to gain momentum thanks to its recent addition to the Olympics and further development at the professional and grassroots levels,” Intersport vice president of sports properties Drew Russell said in a statement. “Based on our storied and successful history of creating and producing live college events for more than 30 years, Intersport is perfectly positioned to bring 3-on-3 basketball to the college game. We've been in the planning stages for months and are excited to bring this new and exciting opportunity to market for the very first time.”

While the event has some punch to it, fans of college programs across the country obviously will be rooting against the idea of having any of their players playing in the event.

Still, for those fans with intense conference pride and for those who would like idea of seeing their seniors play one more time after elimination from the NCAA Tournament, the 3-on-3 College Hoops Invitational has some serious potential.

One of the biggest potential pitfalls, of course, is the idea of players passing on the opportunity for fear of injury a couple of months ahead of the NBA Draft. And while that, no doubt, will keep a bunch of seniors from playing in the tournament, the mere fact that seniors being taken in the two-round NBA Draft has been on a steady decline for years at least brings back into play the possibility of a bunch of notable seniors deeming it worth their while, especially with that cash prize sitting there for the taking.

Who knows if this idea will have the staying power of the dunk contest and 3-point shootout, but it sure seems like it will be fun to find out.

I have been wondering how a The Big Three team would do in Lawrence with ex KU NBA players. Would people watch it?

Wow, this is really cool. I had no idea 3-on-3 hoops was going to be in the 2020 Olympics. That parenthetical line following the suggestion of best-of-3 for the finale was hilarious, Matt.

Couldn't agree with you more on Final Four locations, rotate those 3 sites. I would also accept the Final Four in New Orleans every year. So much fun!!!!