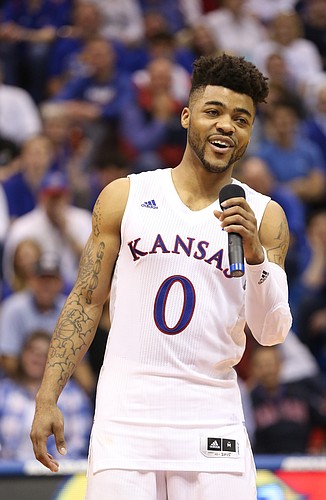 Kansas senior Frank Mason III is in Los Angeles today for the annual ceremony that announces the Wooden Award winner (7 p.m. on ESPN2).

Given the fact that Mason already has swept nine of nine national player of the year awards in the past few weeks and the regularity with which the Naismith and Associated Press players of the year also have won the Wooden (18 of the past 20 seasons), it seems likely that Mason has one more acceptance speech to make.

With that, his Kansas career will officially be over, when the walk to accept the Wooden Award — should he win it — will mark the final time that Mason represents KU on a national stage.

Sure there will be other times that Mason will be mentioned as “that stud from Kansas,” and he always will be a Jayhawk. But, from tomorrow on, Frank Mason will be representing himself, working his butt off morning, noon and night to impress pro scouts and become an NBA player.

For a guy who was all about the team during his four-year Kansas career, ending with so many individual moments is not the way he pictured it. But he is deserving and it’s for more than just the work he put in or the numbers he put up.

See, in the middle of all of that blood, sweat and tears, between the monster games and memorable moments, Mason actually made it a point to soak all of this up. And that was cool to see.

Watching Mason do his thing from courtside all season long, from Honolulu to New York City and the Big 12 backyards to the NCAA Tournament, was an absolute pleasure.

KU, as you know, tends to bring in the best of the best and puts players on the floor that have incredible skills and talent. From Thomas Robinson and Tyshawn Taylor to Andrew Wiggins and Joel Embiid to Josh Jackson this year and dozens of others in the past decade, I’ve enjoyed covering them all and have been wowed by their wizardry on the basketball court.

But I’m not sure I’ve appreciated anyone quite the way I appreciated Mason this season. Maybe it was because he was so consistent and so solid from start to finish. Maybe it was because, no matter what the night or who the opponent, I almost always was amazed when I looked down at his final line and saw huge totals in nearly every category. Offensive efficiency at its finest, right there.

But, again, it also was about more than basketball. My appreciation for Mason’s season grew from week to week in large part because I could tell, in just about every way, how much it meant to him. That’s cool. That’s something I’ll always remember.

I first sensed there was something different about Mason early in the season, when his answers to questions after a number of non-conference games were more engaging and even longer than in years past. Instead of being the quiet guy who didn’t like to say much, Mason spoke up and spoke for the team the way real leaders do.

But it wasn’t just the way Mason responded to questions or handled interviews that put Mason’s monster season on my radar.

In Honolulu, Mason openly invited Journal-World photographer Nick Krug into a Facebook Live session with him on the beach when Nick was trying to get a few shots of the team relaxing in paradise.

Later, at the team’s annual holiday shopping session in late December, Mason jumped at the opportunity to talk to the couple of media members there, making sure that a KU basketball official captured the moment on his cell phone, presumably for some kind of digital scrapbook of his last go ’round as a Jayhawk.

And, again, toward the end of the regular season, as I interviewed Mason while walking with him out of the locker room and down the halls toward the weight room, I caught a quick glimpse of him capturing the whole thing on Snap Chat.

These moments, and many others like them I’m sure, as much as the clutch 3-pointers, ridiculous finishes in traffic or dagger jumpers that buried teams all season, were a huge part of Frank Mason’s memorable senior year. And it was fun to see him embrace them instead of carrying a too-cool-for-school attitude into his final season in Lawrence.

What he did on the floor made him an All-American and led to all of that hardware he collected during the past few weeks.

But what he did off of it, made those words he uttered on Senior Night ring true. “If I had the chance to play four more years here, I swear I would,” he said.

Frank Mason clearly will miss Kansas. But not nearly as much as Kansas will miss him.

Yes to all of this. I have listened to a lot of Senior Night speeches, but I couldn't give you a quote from any of them. Mason saying he would "...play four more years here..." I will definitely not forget.

And I wish he had four more years of eligibility..

Me too. Man, I am going to miss watching him play. It was gritty and magically athletic at the same time. I hope some NBA team will take him seriously. Got game. I will follow you and cheer for you, Frank. You are the best. All the best to you from a grateful Jayhawk Nation.

Mason has been one of the best Jayhawks to watch. Very memorable because you could see what this means to him. He worked hard and we always knew nobody would outwork him. That characteristic rubs off on others.

This guy never had a bad night. I so wanted him to get to a Final Four.

Awards are so vital in sports. They recognize competition and achievements. They primarily separate success from average, etc. If there were no awards, I bet Frank Mason would have been the same person and student-athlete that we all watched and marveled at for the last four years. His drive was for the excellence in the team sport as well as his personal need to prove himself through his dedication and character alongside his natural talents.

Now, it is time for him to put in the work to shine at the NBA "combines" and to leave little doubt as to his ability to perform at the next level. Awards get the attention of NBA scouts, GMs, etc. Frank knows this. He will forget about those shiny trophies as soon as he laces up to claim his rightful place in the Association. The trophies won't substitute for the reality of speed, toughness, mental attitude and a measurement of talent, not size.

I am not minimizing the streak of recognition that we have seen for him. It actually has brought respect for the program at KU where there seems to have been an ongoing trend this season to look for any dust that could bring down the lofty reputation of the basketball program. Frank Mason's name was never mentioned in any of the stories, either real or contrived. He is one of very few players who will be remembered with nothing but pride and admiration form those within the Jayhawk world as well as fans of the sport in general.