There was no questioning how big the moment was when it happened a couple of weeks ago.

But I’m not sure anyone who watched, celebrated or reacted to Tyler Self’s 3-pointer to give the Jayhawks 100 points in a first-round win over UC Davis in this year’s NCAA Tournament thought the shot would become a part of college basketball history.

Sure, it would always mean something to Tyler, his teammates and even KU coach Bill Self, the proud dad who cracked a smile at about the same time Frank Mason III was hopping onto Svi Mykhailiuk’s back. But for the shot — a rhythm 3-pointer from the left wing — to mean much outside of Kansas seemed unlikely.

And then One Shining Moment happened following Monday’s national title game — won by North Carolina — and there, about midway through (1:09 mark), was Tyler Self stroking a jumper and landing a prominent place in many college basketball fans’ favorite moment of the season.

The moment even featured audio from the play-by-play call and a follow-up shot of Self on the bench.

Someday, years from now, when someone puts all these One Shining Moment montages together or looks back on the 2017 NCAA Tournament, Tyler Self will be a part of that memory. 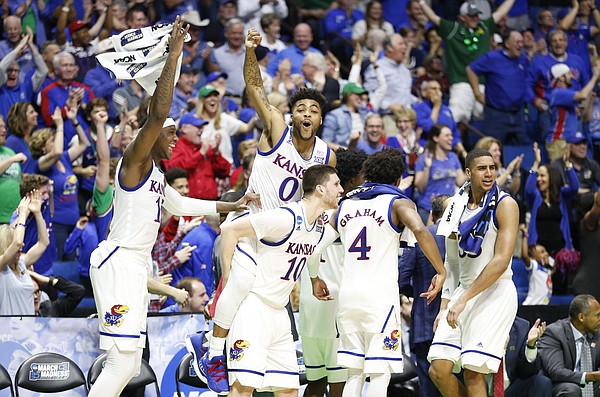 The Kansas bench goes wild after a late three by reserve guard Tyler Self with seconds remaining in the Jayhawks' 100-62 win over UC Davis on Friday, March 17, 2017 at BOK Center in Tulsa, Oklahoma. by Nick Krug

Mason, the nine-time national player of the year (and counting), also made a brief appearance early in this year’s One Shining Moment recap (right around the 23-second mark), and junior guard Devonte' Graham was featured during the heartbeat portion (1:33 in), but there’s no doubt that the highlight for the Jayhawks was Tyler Self’s shot. I’m sure that shocked Tyler and I’m sure Mason loved it all over again just like he did the first time.

OK, maybe he didn’t hop on Mykhailiuk’s back, but you get the point.

Matt, did you notice the up close picture of Frank Mason III? It is at about 0.24.

And Devonte too, but neither is making a triple with Coach smiling :-)