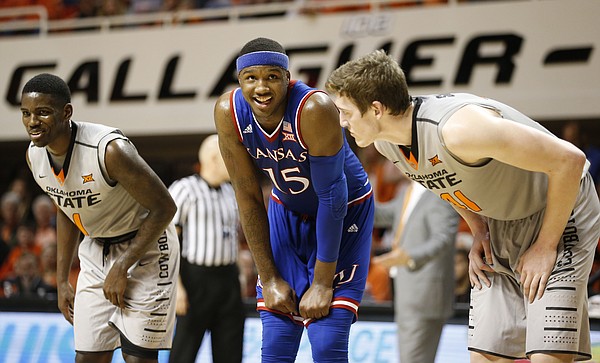 Kansas forward Carlton Bragg Jr. (15) flashes a smile while waiting for a free throw during the first half, Saturday, March 4, 2017 at Gallagher-Iba Arena. by Nick Krug

ESPN.com’s Jeff Goodman on Wednesday revealed five possible destinations for former Kansas forward Carlton Bragg Jr., who decided after two seasons as a Jayhawk to leave Lawrence during the offseason.

According to Goodman and several other reports, Bragg is considering Arizona State, Cincinnati, Illinois, North Carolina State and Xavier.

Reports last week indicated that there might be mutual interest between Ohio State and Bragg, but, at least as of now, the Buckeyes do not appear to be in the running for the former McDonald’s All-American who hails from Cleveland.

Bragg’s departure was one of the surprise storylines of the 2016-17 season, as many had him pegged as a potential early-entry NBA prospect and expected him to have a breakout season while sliding into the role vacated by departing senior Perry Ellis. It never happened, though, and Bragg’s struggles on the floor carried over to his personal life, where he twice was suspended by Bill Self for off-the-court issues.

It does not appear that things will move too quickly here, with Bragg likely to take at least a few visits before deciding on his next school. That certainly could change with one visit, but either way it seems likely that Bragg will make a decision in time to report to his new program in time for summer workouts.

As long as he's not going to a rival Big 12 school, where he goes is of little concern to us.

No, I mean us. He won't be wearing the crimson and blue of KU anymore, and no other Big 12 school is on his list, so we'll probably never see him again or face off against his new team.

Brett was just following your example of putting, in his case, words, in your case, thoughts, and attributing it to all of the readers here.

I am concerned for the big guy - I hope he does find a place to restart his college career. I was actually thinking Danny Manning might be the kind of coach he needs, but I guess that may not have been an option.

I would imagine that if Manning talked with Self, he probably was brutally honest about Carlton and he didn't seem to have his head on straight. I can't see Self advising Manning it would be a good idea to add him to his roster with his off the court issues. Manning is trying to establish a culture still and I'm not sure if adding Carlton at this juncture would be a good move. Not bashing on Carlton at all, just being realistic. I hope he finds success wherever he goes.

Interested to see where he lands. hope Nothing but the best for him. He would have there was no way he was transferring to another Big 12 school I thought about this the other day and found out still in tact, if he were to transfer within conference he loses two yrs of eligibility, that use to be the way in the old Big 8 and is still the case, that wouldn't make any sense. At any rate hoping he gets his fresh start Good luck Carlton

I'm pretty sure if he went to another school in the big12 he'd have to sit out 2 years. He's not going to do that.

I would guess the truth is rather that his struggles in his personal life carried over onto the court. I say that with sympathy more than judgement - I hope his fresh start does him well. I know we'll be fine. Rock Chalk

Unlike Bryce, I do care where Bragg ends up. It sucks he didn't work out for us, but I still hope he finds success wherever he goes.

I am surprised that Ohio State failed to make his list. Clark Kellogg (OSU Alum) would certainly make a good mentor for Carlton, they played at the same high school. I hope he picks a school in the Great State of Ohio, Xavier or Cincinnati, closer to his home.

He needs to work on his ball handling skills, if he wants an NBA career. He is reluctant to dribble the basketball.

Everyone likes a comeback story, hope he gets it all together.