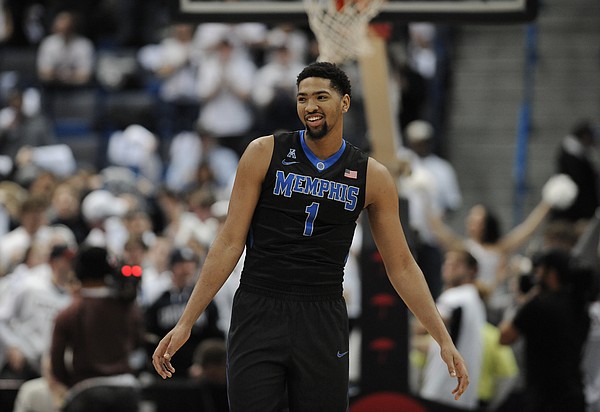 Gary Parrish of CBS Sports reported Monday, through information obtained from their father, that former Memphis standouts Dedric and K.J. Lawson plan to transfer to Kansas.

The two brothers, who are natives of Memphis, where they attended Hamilton High, will sit out the 2017-18 season per NCAA transfer rules and be eligible in time for the 2018-19 season,

Last season, they combined to average more than 30 points, 18 rebounds and 6 assists per game for Tubby Smith's Tigers, who finished the season 19-13.

Both players committed to former Memphis coach Josh Pastner, who has since moved on to Georgia Tech. Their father, Keelon Lawson, held a position on Pastner's staff but was demoted after Smith arrived in town.

Just after noon on Monday, K.J. confirmed the news with a Tweet that read, "ROCK CHALK JAYHAWK"

According to Parish's report, the latest recruiting haul by Kansas might pay dividends beyond the next two seasons, as Dedric and K.J. have two younger brothers — Chandler and Johnathan — who are top prospects in the 2019 and 2021 classes. Beyond that, a cousin, D.J. Jeffries, also is a Top 10 player in the 2019 class.

Though ineligible next season, the Lawson brothers will be able to practice with the team all year, providing some tough competition for KU's rotation players to battle on a daily basis throughout the year.

Stay tuned to KUsports.com for more...

Best free agents on the market! Works for Gonzaga is guess.

Too bad it doesn't work like the NBA we could have sent them Bragg and a future first rounder..

Well those guys get to go to Italy. Man commit without a visit. Hope the family gets to move to Lawrence and those high school guys play at Lawrence Hi or Free State.

I love this idea of signing proven transfers and banking scholarships. Self is a master recruiter mixing program players with OADs and transfers. I'm not sure if that's his plan but it's working. We should expect every year for Self to hold back a couple of scholarships to take advantage of transfers.

So Dedric has not already redshirted a season and would not lose a year of elegibility, thus, having two years remaining to play at KU.

Both players look to be solid additions to KU, as they accounted for 42% of Memphis' scoring and 48% of its rebounding last season. Wish they were available next season.

Both players shoot threes, but neither of them shot a good percentage last season (29% for D. Lawson, and 33% for K. Lawson). Memphis as a team shot just 29%, so their percentages will likely go up at KU.

wonder if we could be in the mix for grad transfer Markel Crawford,, also from memphis

Not a bad sentiment Tim and Robert. Let the young men proceed on their own. We certainly don't need a Lavar Ball type of meddler. Kind of reminiscent of David Padgett's father and perhaps Connor Frankamp's, on a considerably smaller scale.

Or maybe like Mario's dad. Coach Self has a way of facilitating family whether it be sons in the program the university or the greater Jayhawks family (Langford Buford etc).

It's all good but should be noted that the lack of depth this year is very related to the number of transfer players taking spots on the roster.