What caught my eye during Saturday's Late Night scrimmage 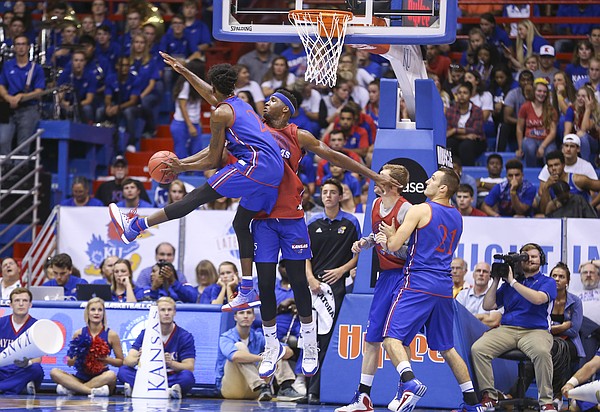 Kansas forward Carlton Bragg Jr. looks to defend against a shot from LaGerald Vick during Late Night in the Phog on Saturday, Oct. 1, 2016 at Allen Fieldhouse. by Nick Krug

It was just a scrimmage, one Kansas coach Bill Self dubbed “pick-up ball.”

But there still were enough reasons to watch and dissect what was happening on the Allen Fieldhouse floor Saturday night during the men’s basketball portion of the 32nd annual Late Night in the Phog extravaganza.

It’s dangerous — even silly — to read too much into what the Jayhawks displayed during the up-and-down, 20-minute game that got fans fired up and featured highlight-style offense. But it’s also impossible to ignore that some of what we saw on Saturday might actually be a sign of things to come during the 2016-17 KU basketball season.

With that in mind, here, in no particular order, are a few quick thoughts from KU’s first official practice of the new season.

The Jayhawks will play more pick-up games today and Tuesday before diving into a real practice Wednesday.

• It might be difficult to find him minutes, but there’s no doubt in my mind that freshman forward Mitch Lightfoot could play — and contribute — if needed. Lightfoot is long, athletic, ultra-aggressive and looks very comfortable in just about every imaginable situation. In many ways, he already reminds me of Hunter Mickelson and it took Mickelson a few seasons to reach the point he was at during his senior year. Whether Lightfoot is called upon for minutes this season or not, the young man definitely has the look of a future star and a guy I think fans will come to love.

• We all know that Frank Mason can score, and he showed that plenty during Saturday’s scrimmage, recording 12 points on 5-of-10 shooting. But for a good chunk of the action, Mason looked, at least to me, like he was much more interested in distributing and setting up teammates. With weapons galore around him on the floor at all times, Mason’s dual role of scorer and creator could really be key for this year’s team. Get this: Mason had eight assists the other night, nearly as many as the rest of the team combined. I hesitate to read too much into it, but based on what I saw Saturday night, I’m expecting Mason to be a score-when-required assist man this season.

• Maybe it was just the nature of the game — get up and down the floor, push the pace, hunt highlights — but I really thought the KU guards looked to emphasize attacking the paint on just about every possession. We know that won’t be exclusively the way things run with a Bill Self offense — high-low, get the bigs involved, play inside-out — but you can bet that the trust he has in his top three perimeter players to turn the corner and get to the rim whenever possible will be a big part of this season. As it was Saturday night.

• The numbers didn’t show the desired results, but I thought Landen Lucas looked much more aggressive on the offensive end than he was most of last season. Chalk that up to confidence. Lucas was not a stranger of the scoring column last season, but he became so skilled on the defensive glass and defense in general that his offensive contributions were often overlooked. Most of them came on easy buckets off of plays made by teammates or put-backs at the rim. But Saturday, you saw a glimpse of what Lucas might be able to do in the post. Again, the numbers don’t necessarily illustrate that point, but if you watched him, you saw a guy who’s not scared to operate on the offensive end when needed.

• Devonte’ Graham and Frank Mason have been and will continue to be absolute luxuries on the defensive glass. Mason has made a point of hitting the glass for years. So much so that KUsports.com’s Tom Keegan even sought to create a new stat for Mason’s defensive rebounding prowess. Don’t be surprised, however, if Graham, who is equally as adept in all the right areas, records more than a few of those new stats himself this season. It’s such a luxury for those guys to be able to go up and get it because when they do, they can immediately transition into the fastbreak without having to give the ball up.

• Josh Jackson’s first basket in Saturday’s scrimmage came 14:07 into the action. He still finished with nine points and five rebounds and showed that he can make a major impact any time he wants to. But he also showed that he’s more than happy to play within the flow of the offense. Self has said all along that Jackson is a guy who “gets it.” And few things illustrate that better than Jackson’s unselfish nature and ability and willingness to play with others. The best news? Three of Jackson’s five rebounds came on the offensive glass.

• Self mentioned this briefly, but you also saw it out there a couple of times if you were looking for it. The Kansas defense this season has the potential to be a nasty trapping team. With so much length, athleticism and quickness at so many positions, KU should be in the position to give teams fits if Self wants to utilize that approach. Just think about Jackson and Carlton Bragg trapping an opposing guard. Or Svi and Vick. Or Vick and Bragg. Or Jackson and Vick. The possibilities are endless and, even if Self only chooses to pull the trigger a couple of times a game, this tenacity could pay huge dividends.

• It was just a first look, but I'm wondering if Dwight Coleby is going to figure out that the best way for him to carve out a role on this team is to duplicate what Landen Lucas did in 2015-16 — play defense and rebound. Coleby, who is coming off of ACL surgery, had some decent offensive skills during his time at Ole Miss. But it's highly likely that those won't be needed at Kansas and the sooner he figures that out, the better his chances of playing will be.

• Good news for KU fans on the Svi front: The junior guard played 18 minutes and didn't commit a single turnover. Given the style of the game and the fact that Svi turned the ball over often during his summer action with the Ukrainian national team, this qualifies as good news. He made just 2-of-7 shots (including 1-of-5 from downtown) but the shot will come. The better news was that he avoided careless turnovers and looked comfortable doing so.

• And, in case you missed it (and therefore would think I'm crazy for not including them), Carlton Bragg and Lagerald Vick were our featured Jayhawks from our Saturday night coverage, so be sure to click on each name for those links in case you didn't check them out yet.

Many great observations. If Kansas is going to be a trapping team, though, we need to rip a page out of WVs book. If nothing else, practicing against the trap will be useful in playing them, because their press can take very potent offensive teams right out of their game. Watching the games versus that pesky Mountaineer squad is the reason why I have very little hair left.

Same here, Mr. Ross.... and what hair I am fortunate enough to have, is very gray... lol

I'm skeptical that Svi's "shot will come." I think he might have been over hyped.

I get the same feeling.

There were a game or 2 last year when he lit things up, so it could happen more consistently in the future. Is he 20 yet?

I agree with Chris.

About 3 or 4 games into the Lucas games, they went to him quite a few times with O-sets only to see him flail miserably. After that, he went back to playing Lucas ball and we all benefitted from it. My guess is he will only expand slightly on that paradign, and you are absolutely right that Coleby would do well to learn from him.

Even AZ would do well in that regard. While he might have greater O potential, Lucas isn't in the starting line-up by default. Those same fundamentals might not get you drafted, but they could provide many $'s in the long run. The NBA is built around big-stars, and those players that help them shine brighter.

We would/should expect Landon to be better during O-sets because of reps and experience. But we have had many post players who never display the "ability" to finish at the rim at a high level (How many comments of missing bunnies do we hear)? And not just post players either. Maybe the same with Svi for three. He should be better but may not be a killer from downtown, However it seems Svi is able to attack and finish inside pretty well.

Where was Azubuike? I didn't recall his name mentioned in any of LN coverage here at all. I wonder if he is still way too slow at this moment and how we can best use him with all other talents on the floor.

Azubulke sat on the bench with a tweaked groin. "Out of abundance of caution", he did not play.

Matt I agree with your observation that this group could be especially well suited to playing some trapping defense. My guess is the trap will come around mid court. I doubt it will be a full court press because HCBS detests giving up the easy basket which even the most effective press does on occasion.We would certainly seem to have the personnel to trap. Another reason I believe we could see the trap is I believe our opponents will try to slow the pace of play and run most of the shot clock. Implementing the trap will allow us to influence the pace and get up and down the court where our superior athleticism will be most clearly demonstrated. When you have the better personnel you want to increase your possessions.