Although it never was in doubt, the Kansas basketball fan base no doubt breathed a little sigh of relief on Tuesday, when KU officially announced the signing of freshman-to-be Josh Jackson.

Jackson, the top-ranked prospect in the Class of 2016 according to Rivals.com, already is pegged as the No. 1 pick in the 2017 NBA Draft and, barring something crazy, will spend just one season as a member of the Jayhawks.

Regardless of how limited his time will be in Lawrence, Jackson still figures to make a major impact on the KU roster, the Big 12 and college basketball in general.

KU coach Bill Self said as much on Tuesday when announcing the signing and it’s clear that the college basketball ceiling for Jackson is as high as any we’ve seen around here in recent years, including Andrew Wiggins.

Since it was the first we’ve heard from Self about his new star-in-the-making, let’s take a little deeper look at what Self said about Jackson and break those comments down into why and how Jackson fits so well at KU.

Self's comments are in bold below, my commentary is in italics after. 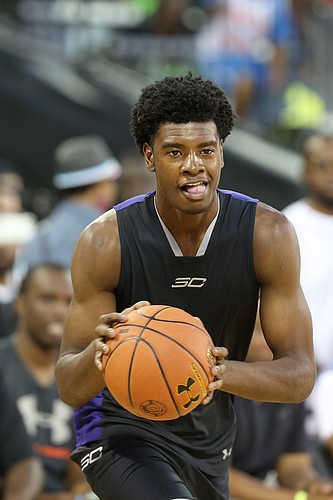 Josh Jackson competes in the dunk contest in the Under Armour Elite 24 Skills Competition on Friday, August 21 in Brooklyn, New York. by Associated Press

“Josh has been a guy that is so respected in all high school circles the last four years.”

This, to me, is a sure sign that KU is getting a young man who is ready for everything that will be thrown at him in the next 10-12 months. Media barrage? Check. Face of the program? You bet. Pressure of playing at KU? No doubt. Chatter about being KU’s latest one-and-done stud and turning pro? Yep. The maturity seems to be off the charts with this guy and I don’t think this will turn into a case of KU getting a player who is a little immature and not ready for life on his own let alone big time college basketball. Jackson seems already to be a grown man and it should be interesting to observe that in the wake of players like Carlton Bragg, Cliff Alexander and even Wiggins.

“He is very similar to Andrew Wiggins. He’s a tall guard that can do a lot of everything. We feel his impact on our program next year will be as much as any freshman will have on any college program.”

Many, including our own Tom Keegan, already have written the inevitable Andrew Wiggins comparison, but it was noteworthy that Self went there. He certainly didn’t have to. And comparing Jackson to a player who was the runner-up in the Big 12 player of the year voting and wound up going No. 1 overall in the 2014 NBA Draft certainly is no subtle thing. That, to me, tells you exactly how much faith Self has in Jackson’s ability to handle the spotlight. We all know that Self is a master at handling the mental side of the game and pushing exactly the right buttons with his players at precisely the right times. Starting out with Jackson on this note tells me that Self believes this young man can handle anything.

This was interesting to me because I’ve seen it debated a few different places among fans on the Internet. Some have called Jackson an incredible athlete and others have said that he’s more of a quality basketball player and not quite in the category of freak athlete. So here you’ve got Self calling the kid “extremely athletic” and I’m guessing that pretty much ends the debate. Don’t get me wrong, I don’t think Jackson is anywhere near as athletic as Wiggins (who is?) and that easily could be the part of the debate that’s getting lost in translation.

“He is probably as highly thought of as any recent player to come out of high school because of his competitive nature. We have a very competitive culture at Kansas, but I think it just got improved with the signing of Josh.”

Throughout the years we’ve heard some big time comment and compliments from Self about his teams and individual players. But this might be one of the best. And the kid hasn’t even suited up in a KU uniform yet. We all know how much competing means to Self so to pay a young player like Jackson this kind of a compliment at this stage in his career is about as big as it gets. The important thing to remember here, too, is that Self already signed him and won the recruiting battle. It’s not as if this was just some comment he made to try to woo him to Kansas.

“He’s a guy that everybody enjoys playing with because he is so unselfish but also a guy that can take a game over.”

I’ve been trying to think of a former KU player who also fit this mold and it’s been difficult. A few guys who come to mind include Jacque Vaughn, Paul Pierce, Keith Langford, Wayne Simien, Ben McLemore and Perry Ellis. If Jackson winds up anywhere near that company, his one year at Kansas will be memorable.

“Josh has a great feel for basketball...”

This is one area where Jackson seems to differ a little from Wiggins. Wiggins, as you all know, was a freak athlete who dominated competition both in high school and at Kansas by using his physical tools. Simply put, he could run faster, jump higher, jump quicker, and move better than most players on the floor every time he played. If Jackson truly does have a better feel for the game, he should be able to impact the action in ways that go beyond athleticism. We’ve heard he’s a great passer and a better ball-handler than Wiggins. And based on what I’ve learned and what little I’ve seen, he seems to have very good command of what everyone on the court is and/or should be doing. It will be interesting to see if that same “feel” that he already seems to possess translates to Kansas and major college basketball right away.

“His recruitment was fierce and deservedly so. Coach Townsend has done such a good job for a long period of time of making sure Josh and (his mom) were both comfortable and educated on our situation and how Kansas could be a good fit for them.”

Recruit the parents, land the player. It doesn’t always work this way, of course, but it often plays a huge role. And Self and his staff know this — and do this — as well as anybody out there. I also think it’s worth noting Self’s praise for Townsend in these comments. Clearly, Self is the closer when it comes to landing these types of players. But without a strong effort from his staff to lay the foundation and, more importantly, stick with the recruitment every minute of every day and as much as needed, his success rate of landing these highly coveted one-and-dones would not be near what it is. Cool to see Self share the love. It’s that kind of feedback and praise that keeps these assistant coaches working so damn hard in a cut-throat and never-ending endeavor such as pounding the pavement on the recruiting grind.

Is this our 3rd #1 signing ever, counting Wiggins and Selby?

Mario, BRush, and Sherron are the ones that I think of regarding taking over a game - besides Wiggins of course. Wayne and TRob are probably both candidates for taking over games though a bit harder from the frontline.

Love that Coach Self mentioned his competitiveness - twice. That IMO was what really set apart TRob and the 2012 team. He had that competitiveness that set him apart. That's what has me really excited about this year. Josh's competitiveness, even more than his other abilities, are what could set this team apart from the others. There is so much more talent around than 2012.

The only person that ever stopped Paul Pierce from getting 30 was Roy Williams...

Pierce could take over a game.

The biggest thing that struck me was the comment about him being unselfish yet still capable of taking over a game... I get that everyone who plays for Self has to be unselfish to a certain extent, but I don't know if Sherron is cut from the same cloth as those guys because KU needed to run everything through him so much his junior and senior seasons.

No doubt he could take over a game, perhaps better than anyone mentioned. I'm just not sure if he qualifies for the unselfish part as much as the others because of the way he was used.

Uh , oh...somebody disagreed with Joe Ross on his first comment back from self imposed exile. What's next?

You're a douche. Get over yourself. Unlike you, Matt made a counter opinion without insults and whining.

...without insults and whining....unlike you, so did I.

I was just trying to be like my hero Jay Scott.

Everyone needs a hero. You should lower your aspirations to something you can achieve.

Now that's funny! You're in the wrong business. Andrew "Dice" Clay better be careful you'll be taking his job soon.