How this year's draft impacts the Jayhawks in the NFL

Another NFL Draft has come and gone and, not so surprisingly, no Jayhawks were selected in this year’s seven-round draft.

That’s a far cry from a year ago, when three former Jayhawks — Ben Heeney, JaCorey Shepherd and Dexter McDonald — were drafted in the seven rounds.

As is the case just about every year, a handful of former Jayhawks who finished their college careers in 2015 were signed as undrafted free agents following the draft, so there is the possibility that the number of Jayhawks in the NFL could go up by the time August rolls around.

But going the free-agent route makes all of those guys longshots to stick so the better way to examine this year’s draft is through the lens of what the teams with Jayhawks did that might impact the former KU players already in the NFL.

The good news on that front is the answer, in just about every case, is not much.

Denver Broncos — The Broncos did pick up a pair of defensive backs in this year’s draft, but both were safeties and neither will threaten the status of starting cornerbacks Chris Harris and Aqib Talib. Let’s face it; even if the Broncos had drafted a corner, even that would not have threatened Harris and Talib, the former KU teammates who have become two of the top corners in the league and, in many eyes, the top cornerback duo in the NFL. 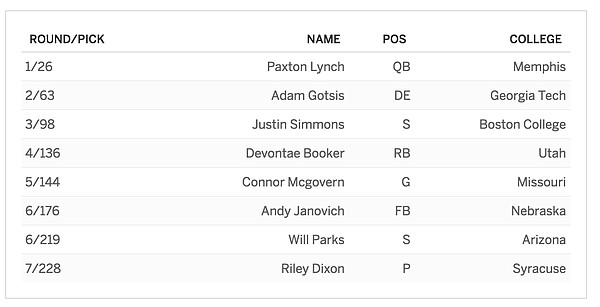 New Orleans Saints — Former KU running back Toben Opurum has spent the past couple of seasons with the Saints, primarily on their practice squad and he appears to be doing enough in that role to keep his bosses happy. The Saints did add a running back in the draft but not until the final round.

Oakland Raiders — The Raiders added two defensive ends and an outside linebacker, but none of those players should impact Heeney, who had a stellar rookie season playing inside and in the heart of the Oakland defense. The talk out of Oakland both immediately after the 2015 season and in the offseason sure made it sound a lot like the Raiders were thrilled with what they had in Heeney and that his role would only increase from here on out. This draft definitely indicates that. The Raiders also stayed away from the cornerback position, good news for Dexter McDonald.

Philadelphia Eagles — I’ve heard nothing but good things about JaCorey Shepherd’s recovery from a torn ACL last preseason as well as the Eagles’ feelings on him as a big part of their future. The Eagles’ draft certainly would lend support to that claim. Phily did add a pair of DBs in the 6th and 7th rounds and one of them, Blake Countess of Auburn, seems to have some steal-type potential. But even at that, Countess seems more like a true cover corner and the Eagles were looking at Shepherd as more of a nickel back. All in all, in could have been worse for Shepherd and he has to be feeling good that the franchise did not feel as if it needed to use a high pick on a player in the secondary. 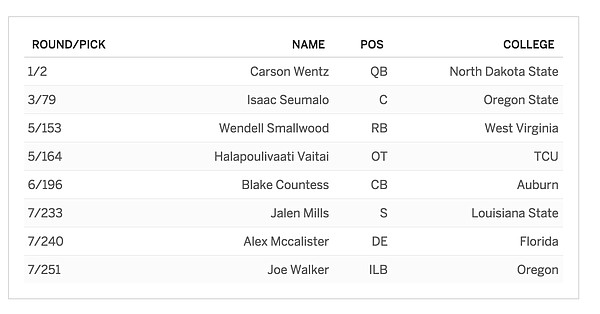 Pittsburgh Steelers — Steven Johnson signed with the Steelers this offseason mostly because of the opportunity to not only make the roster but also impact the team. The Steelers added two linebackers in the draft — a sixth-round pick from Washington and a seventh-rounder from Temple — and it’s entirely likely that Johnson, who has spent time with the Broncos and Tennessee Titans after landing in the league as an undrafted free agent, will have to compete with those two players for a possible spot on the 53-man roster. Competing and being in that underdog role is nothing new for Johnson, so don’t expect him to shy away from the challenge. When I caught up with him at this year’s spring game, he seemed ecstatic about the opportunity in Pittsburgh and no doubt will be ready for the battle.

San Diego Chargers — No safeties in the draft for the Chargers is excellent news for former KU standout Darrell Stuckey, who not only has entrenched himself as a key part of the Chargers’ special teams — he earned a Pro Bowl nod for that role two years ago — but also may be in line for more time in the secondary now that stud Eric Weddle, who mentored Stuckey, is no longer with the team. 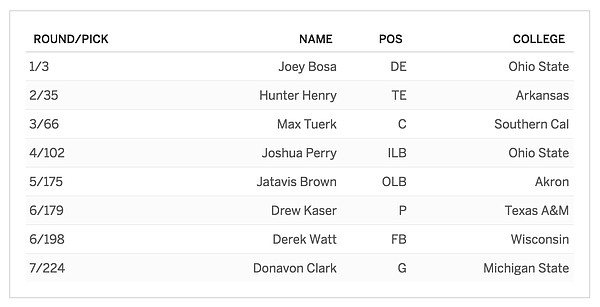 Tampa Bay Buccaneers — The Bucs added two cornerbacks but no safeties, which should inspire former Jayhawk Bradley McDougald to release a sigh of relief. McDougald has been rock solid for Tampa during his years with the franchise and continues to improve each season. He’s still young but now trending toward veteran status and seems to be a big part of their defense.

There are, of course, a handful of other former Jayhawks still trying to hang around with this team or that team, but as for the players who have carved out key roles in pro football, this draft did not seem to hurt any of them.

One quick note about Tanner Hawkinson, who was drafted by Cincinnati and then spent time in Phily before getting picked up by Jacksonville... I saw Hawkinson before this year’s spring game, as well, and he said he was not completely sure what his future held. There’s no doubt that he could still make a roster, but his time in the NFL might have come to an end and he might have been a victim of not catching on in quite the right situation. We’ll keep an eye on it and see what he ends up doing.

I am rooting for all of them.