Villanova coach Jay Wright is one of the best in the business when it comes to taking and answering questions from the media.

And the man in charge of finding a way to knock out top-seeded Kansas on Saturday night was at it again on Friday, filling the room with thoughtful answers and interesting anecdotes.

Many of them had to do with his team or this specific match-up, but others focused more on philosophy and the bigger picture of the game of basketball.

One such story that illustrated that second aspect to perfection was born out of Villanova’s upset victory of second-ranked Kansas in the Bahamas early in the 2013-14 season.

Villanova defeated a young Kansas team that featured freshmen Andrew Wiggins, Joel Embiid and a handful of players on this year’s team on a late shot by then-sophomore guard Ryan Arcidiacono.

The three-pointer was Arcidiacono’s only make of that game, but was far from the only thing Wright remembered about the contest.

Here is that story, in Wright’s words... 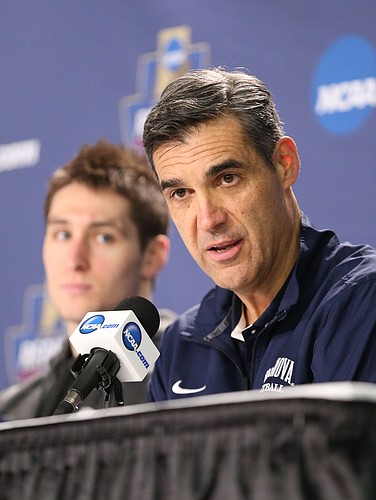 "The other really unique thing about that game, I think I told Bill this, Wiggins had played, I don't know, maybe one or two games before that, and we were pressing him a little bit. He had five turnovers. I think he was sick that day too.

We, in the scouting report, pumped him up to our guys, how good he was. In the game, he had like five turnovers, didn't play that well. I said to our guys, I said, All right, watch this team. I said, You think they turned the ball over and we just beat them? You don't think they're that good? This is why players need coaching. Wiggins had five turnovers. I guarantee you by the end of this season, this kid will be one of the top picks in the draft. The kid, Embiid, got in foul trouble in that game. I said, When he gets coached by Bill Self for a year, I guarantee you this kid is going to be a great player by the end of the year and this team will be a great team. They didn't look good then, guys were sick.

When teams win a game, they think they're better. Then they watched them. At the end of the year, I said, You see that team now? Is that the same team that played us? They're all like, No. I said, That's why players need coaching. You need to be coached.

It was helpful for our guys, who heard a lot about Embiid and Wiggins, to say, well, those one-and-done guys are getting coached. I better listen and be coached. It really helped our team." 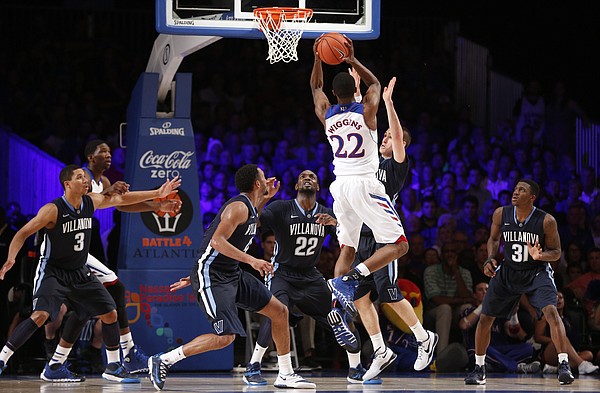 Kansas guard Andrew Wiggins hangs in the lane for a shot over the Villanova defense during the second half on Friday, Nov. 29, 2013 in Paradise Island, Bahamas. by Nick Krug

If I may paraphrase Jay Wright...

"So, we definitely aren't the same team that got Brazilians from Oklahoma earlier this year. I've coached these guys and they've been coached, and they're way better now! So don't think Kansas is going to beat us by 33, because Arcidiacono is like Andrew Wiggins, and I've had 3 years to coach him. So he's better than Andrew Wiggins and I'm not panicking because of the beat down we got in the tournament from Kansas in 2008. Shut up!"

"Villanova's guards can match up with the Jayhawks' backcourt of Devonte' Graham and Frank Mason. Hart is a terrific defender who will be able to give Perry Ellis resistance. Ochefu is better than anything KU has up front. Sure, the Jayhawks have more depth, but that hasn't really come into play for coach Bill Self in the tournament." The E-ville empire.

It was Dougie Backwards that provided the quote before MD, and Goodman did this piece. If these guys can just keep chippin' we'll be fine, though it sure would be nice for them to get healthy.

Wright is intelligent and respectful of the game and his opponents. So is Self. In this last match-up. Wright's players did a better job of doing what they had been coached to do. KU didn't necessarily lose this game, but they did get beat. There is a difference.