It can be a little risky to put a newcomer or unknown player on the list of the 25 most crucial Jayhawks, but occasionally a perfect situation pops up that makes it easy to do.

That's the case with No. 20 on the list, a soon-to-be transfer from Arkansas, who, if all goes well, will bring the depth that the Jayhawks are used to having back to the backfield in 2016.

For the past several years, KU has been stacked with running back depth and been able to lean on various backs at various times, both throughout a game and throughout a season.

But after losing DeAndre Mann and Taylor Cox to graduation, KU all of a sudden was staring a pretty thin running back corps in the face, which made this pick up huge. 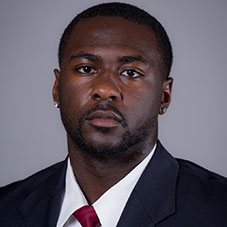 He’s not yet on the roster because he still has to finish up a couple of classes at Arkansas before transferring to KU. But, just by talking to him, you get the sense that those classes and that transfer are not going to be a problem.

That’s a good thing for the Jayhawks, who enter 2016 a little thin at running back and certainly could use the extra body, especially when it comes in the form of a 5-foot-11, 217-pound veteran who spent the past few seasons playing and experiencing football in the SEC.

Evans is far from a sure thing. He played only sparingly at Arkansas and will have competition at Kansas to be the primary back-up to returning starter Ke’aun Kinner. Sophomore Taylor Martin, a year older and more comfortable, also figures to factor into the backfield situation rather prominently and freshman Khalil Herbert also will get his shot at playing time.

But Evans, who grew up 10 minutes from the University of Houston campus and chose KU because of the coaching staff and the fact that Lawrence was “real laid back and reminded me of home,” may be the most hungry of that bunch, desperate for an opportunity to get back on the field with some regularity to show that he can still run the ball.

“It was hard freshman year coming out of high school,” Evans said of standing on the sideline instead of lining up in the backfield. “But I always worked regardless and it was never looked at as a bad thing. I had been here a while and I just felt that, getting close to graduating, it would be time for me to step out and go somewhere else where I could get some more playing time and get some more carries.”

How many carries that winds up being depends purely on how quickly Evans buys into both David Beaty’s offense and the second-year KU coach’s philosophy of earning your keep every day.

Unlike most graduate transfers, Evans, provided he makes it, will have two years of eligibility remaining at KU, making the likelihood of him buying into what Kansas football is all about even greater given that his time in Lawrence won’t be just a one-year detour.

Even if Kinner and Martin use the head start they have on Evans to land at the top of the depth chart, there’s still a place for one of the newest KU commitments, who calls himself a balanced back with a good blend of size, speed and pass-catching ability. The Jayhawks are used to having depth in the backfield and using multiple backs throughout the season. With Evans, the beat goes on. Without him, the pressure on Kinner to stay healthy and Martin to develop turns up.

That’s what makes the Evans pick-up so important and puts him in a situation to finally be relevant on Saturdays again.

A smart addition by the staff. A weakness - depth - disappears, competition increases and we are competitive with other teams at another position. If the O-line can step up this year, some good things can really happen.

Where does James Sullivan fit in? I thought i heard he had a great spring.

He will definitely fit in. He has a strong body and good instincts. This position will be all about whether one player snatches most of the PT. If Kinner stays healthy he may do that.

Even if Kinner stays healthy they're gonna need 'em all... Happens that way every year and I know this staff thinks it's a huge advantage to have fresh bodies on the field, which, as long as they're ready to play, only means more opportunity for all of the backs in the program, including Sullivan, the junior who came to KU from Fort Hays State.

Are we still getting the CSU transfer from Wichita?

He would be a year away, so irrelevant to this series, but still intriguing none the less thinking of KU football moving forward.