It took a few days, but we've reached our first play maker on offense in this year's summer series that lists the 25 most crucial Jayhawks for 2016.

It's no secret that scoring points, snagging first downs and producing on offense has been a challenge for the Jayhawks during recent years, but it's athletes like sophomore wide receiver Steven Sims Jr., who have the Jayhawks hoping those days soon will be gone. 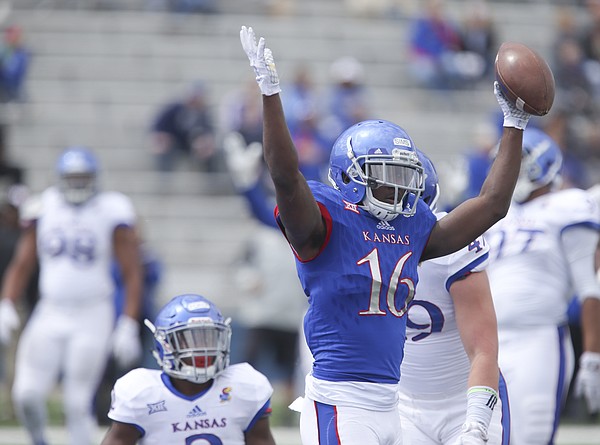 Kansas wide receiver Steven Sims Jr. (16) throws up his arms after falling into the end zone for a touchdown during the Spring Game on Saturday, April 9, 2016 at Memorial Stadium. by Nick Krug

One of the few offensive bright spots from last season, Sims enters his sophomore year with even more confidence than he arrived with and experience to go with it.

At 5-foot-10, 176 pounds, Sims can give the impression that he’s one of those slot receiver types. But this is an athlete who can make plays all over the field, run all kinds of routes and go up and get the ball in traffic if needed.

Sims finished the 2015 season with 349 yards and 2 touchdowns on 30 receptions, all of which ranked second on the team. He played in 11 of 12 games, starting six, and really seemed to find his stride when fellow freshman Ryan Willis and his big arm and ability and willingness to take shots down the field took over under center for the Jayhawks.

Two of his biggest games of the season, in terms of receptions, came in two of Willis’ first four starts, when he caught nine balls over two games, and he capped the season with a career-high 58 yards in KU’s loss to K-State.

While none of those numbers will blow you away, the fact that Sims stood out as a player with longterm potential, especially against bigger, faster Big 12 defenses, paints those numbers in a different light.

Heading into 2016, with the freshman tag no longer buying him time, Sims will be counted on to increase those numbers and make even more of an impact. A big factor in whether that will be possible will be the performance of KU’s offensive line and quarterback(s?). But if those two units hold up, there’s no reason to think that Sims can’t take a significant step in his development.

Add to that the fact that the Jayhawks are expected to run more of a true Air Raid offense with David Beaty calling the plays — think more opportunities to make plays in space — and that Sims should benefit from the presence of former Texas A&M receiver LaQuvionte Gonzalez drawing attention from opposing defenses, and it’s easy to see Sims improving upon all three of those major statistical numbers and becoming a bona fide weapon for the Kansas offense.

In order to do it, though, he’ll have to remain consistent. With so many receivers on the roster and Beaty proving that he’s willing to play whichever player “earns it” week in and week out, Sims’ numbers will only rise if he puts in the work during the week to get those opportunities on Saturdays.

For some reason I had it in my head Sims is a senior this year so it's exciting to me to see he's only a sophomore and has a few more years here! I think this kid is an exciting player and his potential impact is something I look forward to watching develop.