Today's entry on the Most Crucial Jayhawks of 2016 list is a name that's both wildly familiar to KU fans and wildly unusual in the dictionary of baby names.

It also belongs to one of KU's top returning players from 2015 and likely falls a little lower on the list than many people expect simply because we now know what this player is capable of and the standard for his season is higher than the one for most KU players, old and new. 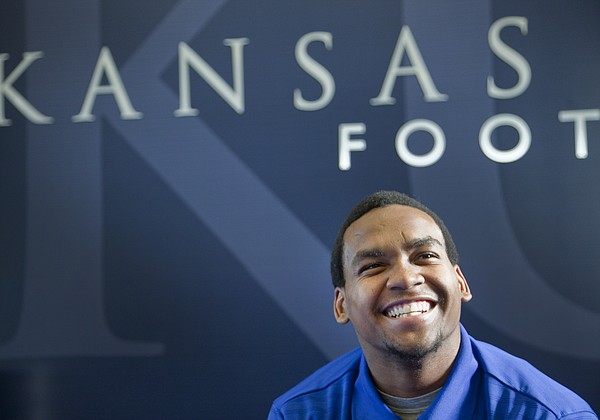 Kansas University safety Anthony Smithson? No, the junior-college transfer prefers to be called ‘Fish,’ a nickname given to Smithson by his grandmother when he was an infant. by Mike Yoder

They don’t make ’em much more consistent than KU safety Fish Smithson, but, according to Fish himself, they do make ’em better.

That’s why the senior returning for his third season in the program who led the Big 12 in tackles (111) and the nation in solo tackles per game (7.9) in 2015 spent the entire offseason working as if he had yet to accomplish a thing.

Named to the all-Big 12 second team following a strong junior season, Smithson returns as not only the most accomplished player on KU’s defense but also one of its anchors.

He’ll have more help and experience around him this season, which should give him a better opportunity to make more plays. But he does not figure to stray too far from the traits that made him one of the more sure tacklers in the Big 12 a season ago — toughness, intelligence, effort and pride.

Like many players on the KU roster, Smithson leaned up and got stronger this offseason. That, he believes, will make him a better all-around player. He also emphasized becoming a better leader and more polished in coverage and said after the 2015 season that he would like to be known as more than just a solid tackler.

No matter how much they appear to have improved in 2016 — if at all — the Jayhawks are going to need Smithson to continue to clean up the back end of their defense. But if he can capitalize on the work he put in on the other aspects of his game and add it to what people already know he’s capable of, Smithson can take that step forward that he wants to take.

Matt, I really hope he is as accomplished as many think he is. My FB analysis is usually lacking in technical areas, but if he and others can secure the back end of this defense in a speed and pass crazy league, we could enjoy watching the Hawks this year.

Certainly the LB corps appears set to be league average at worst. WR/TE should also match the average talent league wise even though we are a bit green there. DL could be another spot where talent may have added enough strength and experience to compete. Special teams look to be much improved just because Joe DeForest is here.

That leaves us secondary on defense (and there is talent here, just inexperience), the O-Line, QB and RB to raise the level of performance for us to pick up a couple of wins that no one expects.

The athleticism and conditioning of this team should make them fun to watch.

On spot regarding LB's, but way way optimistic about the WR's relative to the league. They should be improved, but our best might not even be a starter on other top Big12 teams.

Joe DeForest should help the ST indeed, but that group isn't likely to improve significantly until we get nearer to a full squad so that we have better athletes available, and not gassed from playing regular downs or just not available.

RB could see a nice improvement if we can stay healthy and the ArKansas transfer is productive, but then improvement means moving up from the bottom of YPC.

A sign of an improving D will be Fish having fewer tackles.

We need to both get the D off the field sooner, and get more tackles from the front of the D as well as other DB's.