We've reached the end of another week and the beginning of July. That means, the next time the calendar turns it will be football season, with the Jayhawks slated to report to campus Aug. 3, begin preseason camp Aug. 4 and kickoff this year's annual media day on Aug. 6.

With that in mind, it's more O-Line flavor for today's entry of the most crucial Jayhawks of 2016, as one of the Jayhawks' most steady linemen from a year ago is adjusting to yet another new role that could wind up being crucial this season for a number of reasons. 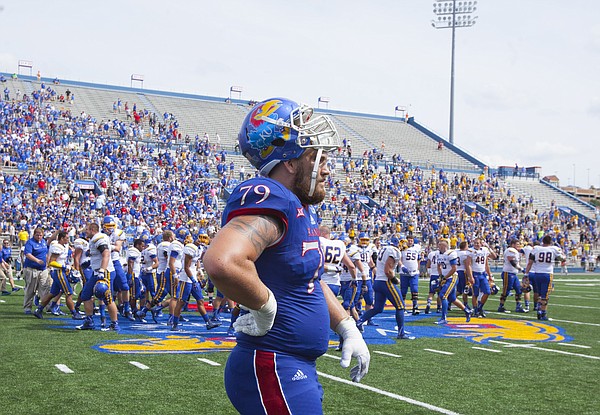 After fully making the transition from tight end to left tackle, senior Jordan Shelley-Smith has become one of the more important pieces along KU’s offensive line.

A starter at left tackle in nine of the 12 games during KU’s winless season in 2015, Shelley-Smith showed quickly the ability to add size and strength while maintaining the agility and athleticism that made him a three-star prospect out of Waco, Texas, in the 2012 recruiting class.

During the transition, which Shelley-Smith embraced whole-heartedly and with great pride, the KU veteran endured some growing pains and bumps and bruises but persevered. After missing a good chunk of spring practice this season because of injury, Shelley-Smith has returned to action and is in a battle with Clyde McCaulley at the right tackle spot.

Regardless of which players wins the starting job, both will play and both will be counted on to provide depth. Shelley-Smith, with a year at left tackle under his belt, can provide depth at both spots and, one of the best things about his role on the team is his attitude. Even if Shelley-Smith is beaten out or plays a limited role, he’s the kind of teammate who will remain engaged and supportive of those around him.

You can’t have too many players like that and it’s often guys like that who tend to have good things happen to them. Assuming that’s the case here, Shelley-Smith will recover fully from his injury and provide the kind of steady influence along the O-Line that this young-but-improving group needs to compete week in and week out.