The Day After: Mauling the Bears 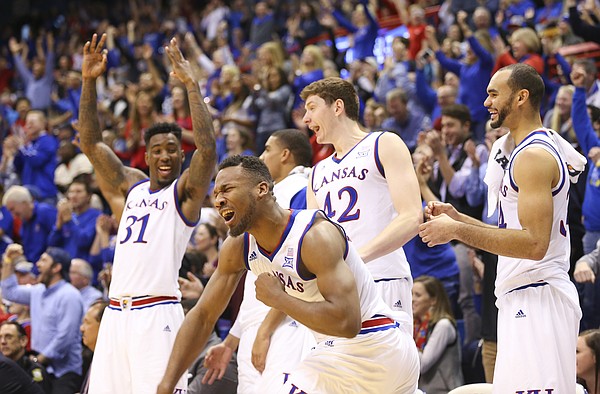 Kansas guard Wayne Selden Jr. (1) pumps his fist in celebration with the Jayhawks' bench after a late three by teammate Lagerald Vick during the second half, Saturday, Jan. 2, 2016 at Allen Fieldhouse. by Nick Krug

They talk all year — literally, 365 days a year — about what winning the Big 12 title means to this Kansas University men's basketball team.

On Saturday afternoon against 23rd-ranked Baylor, the Jayhawks showed they mean it. In what was by far the most intense, focused and locked in I've seen this team all season, the Jayhawks (12-1) overwhelmed the Bears (10-3) with a monster start that put the game away before it ever really got going.

KU was fantastic on offense, draining outside shots and getting out in transition to score with ease. But the intensity showed up on defense. There were no sly grins, no wandering eyes, nothing but intense focus on the man three inches in front of them.

That, along with the fact that KU's offense remained hot, kept Baylor from having any hope of getting back into it after digging a 24-4 hole during the game's first six minutes.

As if there were any doubt about which team was the team to beat for the 2015-16 Big 12 title, the Jayhawks got their quest for a 12th consecutive conference championship off to a fantastic start, spanking a ranked team at home, where it's going to be awfully difficult for anybody to come in and have success. That gives KU a huge advantage on the field every year and that advantage could grow big time if KU is able to knock off likely No. 2 ranked Oklahoma at home on Monday night. KU has won this thing in a number of different ways over the years, but any time the Jayhawks have gotten out to an early and significant lead it has been awfully tough for anyone to catch them. That's what makes Monday night's game so big, if No. 1 vs. No. 2 wasn't already big enough.

1 – Hunter Mickelson will never be confused for Wilt Chamberlain, but he could be KU's most important big man the rest of the way. It's not that he puts up big time numbers or blocks a ton of shots. Heck, he doesn't even play big time minutes. But the more he plays like he did on Saturday, the more his minutes will increase. And the more his minutes increase, the more the Jayhawks will benefit from his ability to alter shots even if he's not blocking them. Perhaps the best part of his performance on Saturday — 7 points, 6 rebounds, 3 blocks in 17 minutes — was that it came against Baylor, which is full of long, athletic bigs who can create match-up problems for a lot of teams. Mickelson held his own when he was out there and he shouldn't see too many tougher match-ups, in terms of athleticism, the rest of the way. 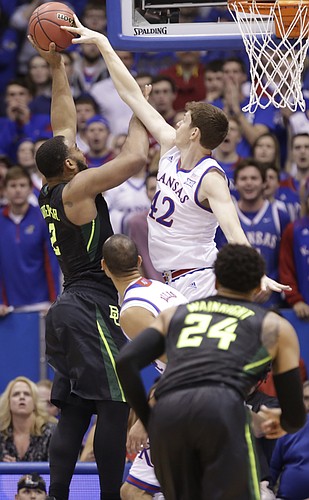 Kansas forward Hunter Mickelson (42) gets a hand on a shot by Baylor forward Rico Gathers (2) during the first half, Saturday, Jan. 2, 2016 at Allen Fieldhouse. by Nick Krug

2 – Perry Ellis, once again, was among the Jayhawks' leading scorers (17) and rebounders (6) in this one, but it was his aggressive play that stood out the most. Early in the game, Ellis crashed the boards hard, collected a missed shot and laid it back in all in one motion. Later, he showed a desire to hammer home a dunk instead of shooting a floater while getting fouled. He didn't flush it, but that mindset is exactly what the Jayhawks need and want to see from Ellis. 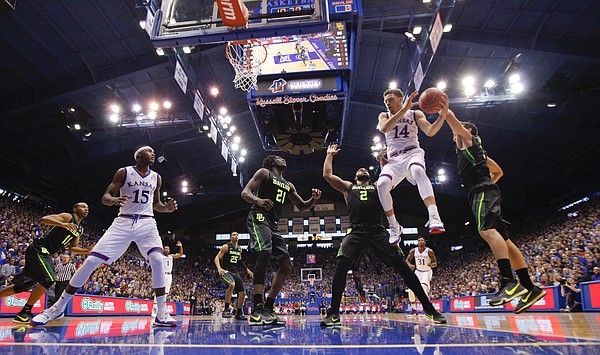 Kansas guard Brannen Greene (14) hangs to dish off a pass to orward Carlton Bragg Jr. (15) during the second half, Saturday, Jan. 2, 2016 at Allen Fieldhouse. by Nick Krug

3 – He made just 2 of 6 shots, 1 of 2 from three-point range, but junior Brannen Greene showed another glimpse of his willingness and ability to put the ball on the floor and attack the rim. No longer is Greene just a spot-up shooter and that fact is putting a lot of pressure on opposing defenses and giving KU another big time advantage on offense.

1 – Foul trouble and silly fouls was a little bit of a concern. Because the game was out of reach, the fouls really never threatened to hurt the Jayhawks. But Frank Mason sat early in the second half after picking up No. 3 and KU's 23 fouls led to 31 trips to the free throw line for the Bears, who made 25 of those attempts. The free throws helped keep Baylor somewhat close and kept KU from slamming the door much earlier. 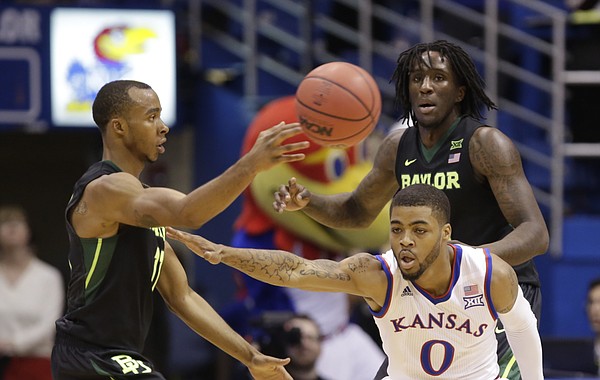 2 – The Jayhawks gave up 32 points in the paint, which included far too many drives to the bucket for layups. This has plagued the KU defense a little bit during the past three or four seasons and certainly is not what you expect from a Bill Self team. KU made a few adjustments and the guards — Mason, Graham and Selden — were pretty good here. But the overall team defense could continue to get tested on drives to the rim, starting Monday night when OU and its dynamic backcourt led by Buddy Hield comes to Lawrence. 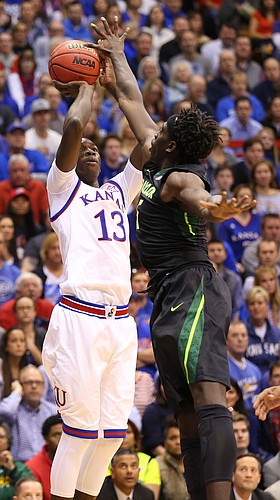 3 – Cheick Diallo continued to show he's not progressing. The freshman forward's potential is unquestioned. But he's not making the kinds of strides necessary to merit more minutes. What's worse, he's not making many good decisions and positive plays with the minutes he is getting. Sure, he had the big block and a couple of flashy plays against Baylor, but those did not make up for the three herky-jerky and contested jumpers (one of which he made) or the half a dozen times teammates or coaches had to tell him where to be on offense or defense. There's still time for him to make an impact, but if he's going to, it's going to have to start in practice because there just aren't minutes for a guy who makes that many mistakes at this point in the season.

• Made Kansas 12-1 on the year and a perfect 8-0 inside Allen Fieldhouse this season.

The Jayhawks, most likely ranked No. 1 in the nation, will return to Allen Fieldhouse for a showdown with likely No. 2 team, Oklahoma, at 8 p.m. on the first of four Big Monday games on ESPN. 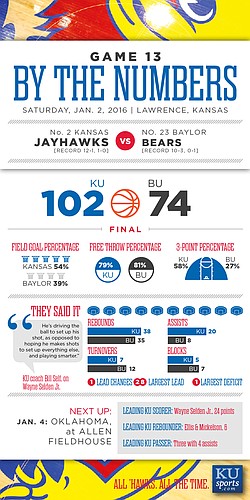 'Look Ma, I can dunk!' - Perry, if you can consistently dunk (or at least attempt) in every game, I'd say you'd better prepare to be called comes June.

Giving up layups will be a big problem against Buddy & his buddies on Monday. Hopefully, this will be addressed in the team meeting.

Diallo is too talented and too smart to remain mired in mediocre play for the long haul. But his inexperience is certainly showing. I think there is a good possibility he will be around for a year more, and maybe two.

Not much better example in the world of a guy who should play three years - a'la Morri - and then build a solid NBA career. He'll add 15-20 lbs to his frame, learn the system and become a dominant inside presence if he stays. Then he'll make millions. Not too shabby.