The Day After: Lapping the Longhorns 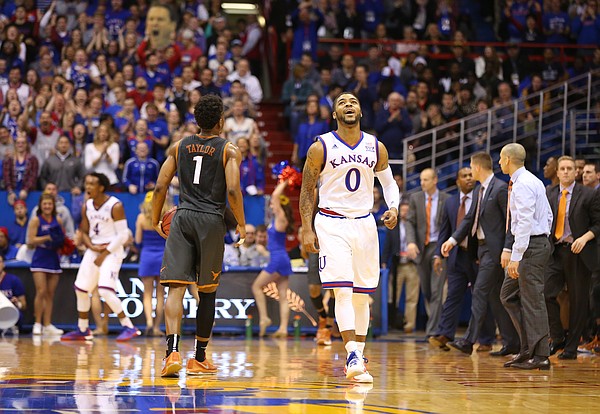 Kansas guard Frank Mason III (0) celebrates during a Texas timeout in the second half, Saturday, Jan. 23, 2016 at Allen Fieldhouse. by Nick Krug

For a little more than 10 minutes — and, really, most of the first half — the Texas Longhorns walked into Allen Fieldhouse, flexed their muscles and looked like a team more that ready to knock off the Kansas Jayhawks.

But KU, this time buoyed much more by the talent of its top four than the mystique of Allen Fieldhouse, absorbed UT's best shot and then delivered one of its own to pick up an impressive 76-67 victory over a good Texas team.

Perry Ellis, Wayne Selden, Frank Mason and Devonte' Graham were far from perfect on Saturday. But they did what this team needed them to do and did it without hesitation. Had they been at all tentative during the final 30 minutes the way the entire team was in the first 10, there would be no celebration for Bill Self's 200th victory in Allen Fieldhouse and KU's temporary funk may still be a hot topic.

As it stands, those four delivered big time and the KU fan base can breathe easy at least until Monday night, when KU heads to Ames, Iowa, for what promises to be a heck of a test at Iowa State.

I've talked a lot this season about the KU veterans and how, after three or four years of playing for Bill Self, they should know exactly what is expected, play with a sense of urgency and be the type of players who benefit from the seasoning they've experienced during their previous years of college basketball. On Saturday, after a couple of inexplicable outings at West Virginia and Oklahoma State, the KU upperclassmen did just that. They were poised, they were tough and they didn't blink even on a day when Texas got off to a white hot start. That experience and the result that came from it should only toughen up this team, which figures to make them an even tougher out down the stretch.

1 – KU's three-point shooting came back to life and might have been the biggest reason this team was able to come back and knock off Texas. After hitting just 11 threes and shooting 26.2 percent (11-of-42) behind the arc in its previous two outings, KU connected on 10 threes against the Longhorns and shot 40 percent (10-of-25), which included a 6-of-12 mark from three-point range in the impressive second half. Devonte' Graham and Wayne Selden both hit some huge threes and each guy looked perfectly in rhythm when they took their big shots, something that had been missing in the past couple of weeks. 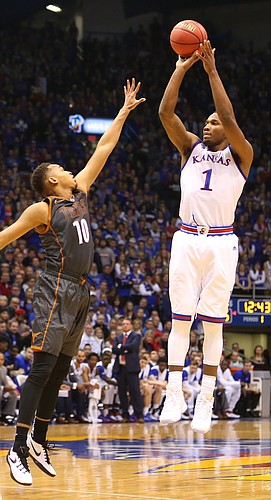 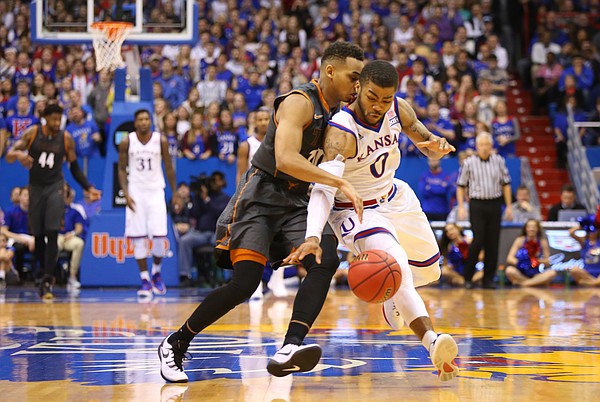 3 – Frank Mason got up from that nasty fall he suffered late in the game. As if the slightly struggling Mason needed any more reasons to be off of his game, he took a tough fall late in the win over the Longhorns and stayed down on the floor for a couple of minutes before getting up. In general, all of the abuse Mason takes during a game, during a season and probably even during practice, is no reason to smile. But the fact that this guy continues to prove he can take it and play through it is great news. Mason wasn't great shooting the ball on Saturday. He finished just 3-of-14 from the floor, including 1-of-5 from three-point range. But he chipped in eight rebounds, made 6 of 7 free throws and finished with 13 points in 39 minutes. You hate to see Mason take the punishment, but you have to love seeing your team led by such a physically tough player.

1 – After playing double-digit minutes during the past two games and looking just a wee bit better, freshman forward Cheick Diallo returned to the single-digit minute mark against Texas, this time playing a big, fat zero. I know KU fans are up in arms about this and most of them blame Bill Self for his unwillingness to play the raw freshman in big spots. But the reason that Diallo's latest step back is a reason to sigh falls on Diallo's shoulders if you ask me. I know that's not the most popular opinion, but with Diallo's tools — size, length, athleticism, etc. — don't you think Self would absolutely love to play the kid if he thought he could? The bottom line is this: Diallo obviously is not doing enough to convince Self that he can be counted on in Big 12 games, and, barring something drastic happening, I don't see that changing any time soon. Self also sat Hunter Mickelson and Svi in this one and it's clear that the KU coach is trending toward playing veterans who have proven they can handle it over youngsters with potential. 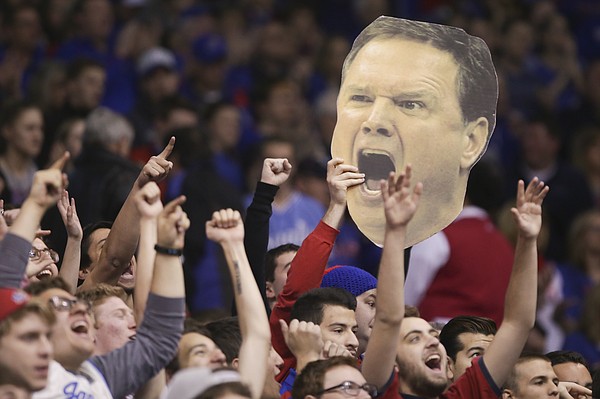 A fiery Bill Self head is hoisted up among the students during the first half, Saturday, Jan. 23, 2016 at Allen Fieldhouse. by Nick Krug

2 – Brannen Greene can't get going. After coming back from his suspension with renewed focus, effort and energy, Greene has kind of disappeared during the past few games. A few weeks ago, when Greene first started showing his ability to drive the ball and create for others, I thought the addition to his game was great news. But he hasn't been able to get going from three-point range ever since and that included Saturday when he finished 0-for-2 with an air ball. If Self's going to shorten his bench, which might not be the worst thing for this team, he's going to need Greene to perform better in order for it to work. 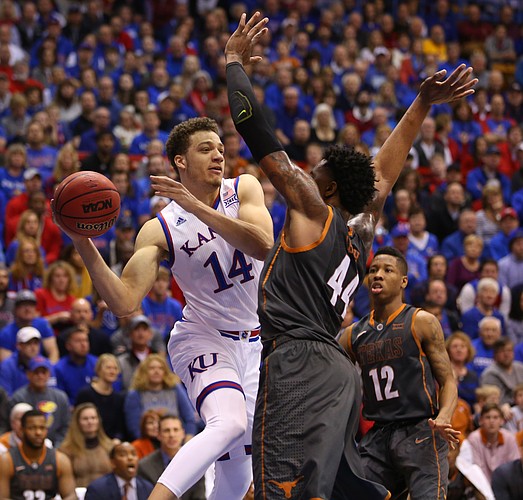 Kansas guard Brannen Greene (14) looks to throw a pass around Texas center Prince Ibeh (44) during the first half, Saturday, Jan. 23, 2016 at Allen Fieldhouse. by Nick Krug

3 – Late in the game, while trying to identify one of KU's defensive highlights, I was pretty surprised to see that the Jayhawks had just one steal and two blocks in this game. Maybe that speaks to the athleticism of the Longhorns, who were better able to get out and away from the Jayhawks than most teams. Still, it's not as if the Longhorns are the only ultra-athletic team KU is going to face the rest of the way and the Jayhawks are going to have to find a way to create some more turnovers via the steal than they did on Saturday. The blocks come and go and KU does not exactly have a serious shot-blocking threat in the paint, so that was less surprising. But I'm sure there aren't too many people happy with KU's one-steal performance, especially at home.

• Made KU 56-9 following a loss in the Self era, including a 32-6 record following a conference loss.

The Jayhawks will head out on the road Monday night for a Big Monday showdown with Iowa State at Hilton Coliseum in Ames, Iowa. The 8 p.m. tip off on ESPN will mark the first meeting this season between these two preseason Big 12 title favorites. 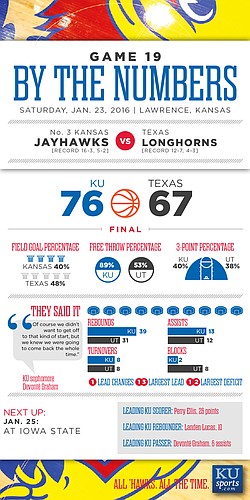 We have seen enough 30 point halves to know it is a real possibility against a more athletic ISU team. If we do that again then the Cyclones will have to play down to our level for us to be able to pull out a very important road victory. For a team with a Perry Ellis forward to get zero points from the 5 spot in support of him is such a waste. A minimum of 10 is the least we should accept. This lousy type of scoring support puts pressure on the three guard to pick up that slack. 45 between Perry and Wayne plus 25 from Frank and DeVonte. That's only 70 which wont get it done against ISU. Niang and their three guards will get 70. The difference will be inside. 10 points from the inside guys gives one team 80. That should be enough to hold us off. Or them.

A 46 point half against Texas was encouraging but not enough body of work to make me a believer yet.

Watching some national games it's clear that this year is all about who can shoot 3's. Only a few teams like MSU and Louisville have the muscle to out play the opposition. Iowa, IU and possibly Duke, along with OU have 3 reliable 3-point shooters, and they put up big numbers. KU right now lacks the muscle and lacks the gunners. And they aren't NC is terms of talent and execution. Not knocking them (too much), but this is simply last year's teams with a little improvement. It's not a team with 3 NBA draft picks in the starting line up. There is going to have to be some real magic going forward.