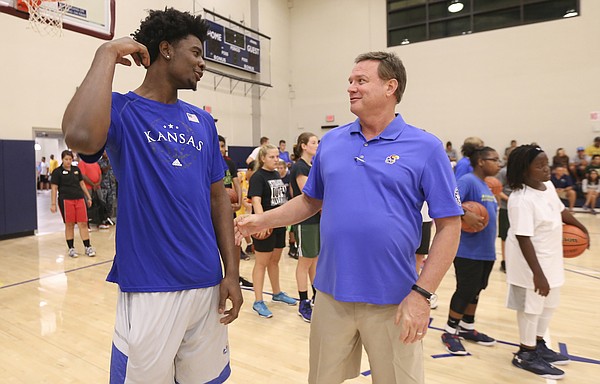 Kansas guard Josh Jackson jokes around with head coach Bill Self during a kid's clinic on Wednesday, Nov. 9, 2016 at the Joint Base Pearl Harbor-Hickam fitness center in Honolulu, Hawaii. by Nick Krug

From the perspective of the common fan, Kansas freshman Josh Jackson has proven to be the ultra-talented, incredibly skilled, hard-working competitor that he was deemed to be when he signed with the Jayhawks.

From the perspective of Kansas coach Bill Self, Jackson has been so much more.

Thursday afternoon, during his regular weekly news conference to preview Saturday’s game against Nebraska — 2:15 p.m. tip at Allen Fieldhouse — Self went deeper on the one thing about Jackson that has made him marvel since he began coaching the one-and-done freshman phenom.

“Josh is one of those guys who, even though he's really, really bright, he knows he doesn't know,” Self said. “It's amazing to me, when we do scouting report or whatever, he hangs on every word.”

So much so, in fact, that Self has found himself testing Jackson on purpose just to see how he would answer and react.

But it’s not just a yes or no question we’re talking here. It’s much, much deeper and includes much greater detail.

“I'm talking about, hey, look at this possession here and I want you to tell me exactly why the other team scored,” Self said. “Break it down.”

Emulating Jackson, Self says, “Well, they didn't show this screen.”

Quickly, Self interjects with, “No, that's not why. Look at it again.”

“He's one of those guys that wants to know those things,” Self continued. “That's one of the things that impresses me the most about him is he wants to get better.... I'm not sure everybody's like that.” 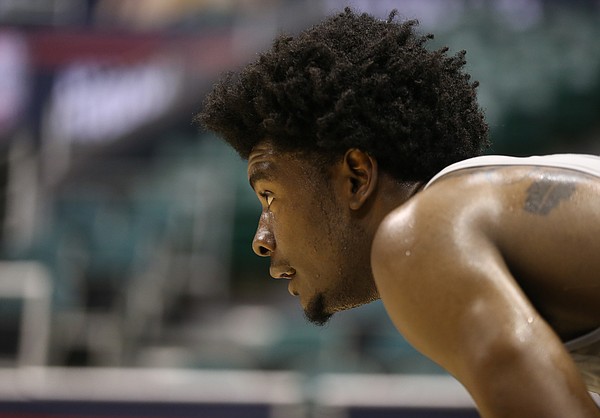 Kansas guard Josh Jackson gets a break on the sidelines as the team works on perimeter defense during a practice on Thursday, Nov. 10, 2016 at Stan Sheriff Center in Honolulu, Hawaii. by Nick Krug

Asked if he thought he had learned anything from coaching previous one-and-done standouts that might be helping him reach Jackson on a different level, Self said he wasn’t sure and added that that would be a question for his assistant coaches.

In the same breath, he again pointed toward Jackson’s intelligence, hunger and drive as the biggest reasons it looks — at least through nine games — like Self and the Jayhawks are getting more out of this one-and-done star than any others in the past.

“The thing about Josh that I think is really, really great, and (Andrew Wiggins) was the same way, Joel (Embiid) was for sure the same way.... he wants to be coached,” Self said. “He wants somebody to correct him. Now I'm not saying he wants to be jumped, but I'm saying he'd like somebody to coach him and correct him and be constructive and at the same time push him and try to get the most out of him. He likes that. 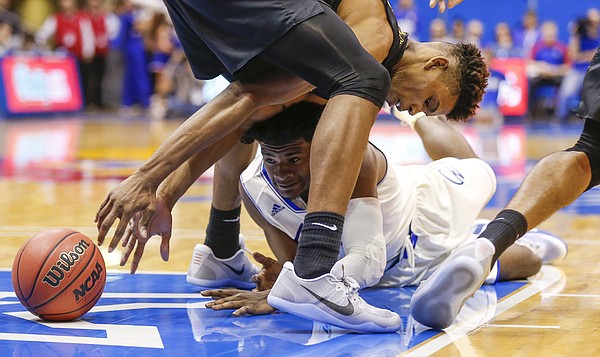 Kansas guard Josh Jackson (11) tries to regain a lost ball between the legs of Long Beach State forward LaRond Williams during the second half, Tuesday, Nov. 29, 2016 at Allen Fieldhouse. by Nick Krug

Love the comments from Self. Could Jackson be one of those rare great players who also becomes a great coach after his playing days are over?

If he continues to play and improve as he has this season, we may have a long wait to see, as his NBA days may not be over for a very long time. But what a great talent and hard worker he is.

I have no idea about him coaching someday but I really look forward to seeing him play the remainder of this season and watching his future professional success. With Wiggins having been NBA Rookie of the Year.... Jackson might be another.

1 year is so fast. I'd love to see someone like him stand up and say, "I'm having a blast with true friends and love the excitement of college basketball, especially in Allen Field House. I'm looking forward to 1 more year at KU to build lifelong memories. The money can wait."

I'd describe Jackson's interest in learning with one word: passion. This kid is going to be something else by the end of this season because he has a passion for the game. And I think he's a little bit motivated to be the 1-1 Pick (nothing wrong with that).

What a refreshing view on an O.A.D. compared to the pouting of Oubre and others. My guess is that Jackson won't get out-hustled by a shocker to a loose ball.

The ceiling on this team is so, so high. A lot of that has to do with the ability and attitude of Jackson.

Oubre didn't get it right away, but I don't recall him pouting. In fact, when he struggled early, it seemed that he got real focused on learning and improving so that he could contribute. Even Diallo, who never got it here, never seemed to pout. Cliff? Maybe. Probably the closest is to go all the way back to RussRob not being willing to go into the end of the game at the end of the season. At least as far as I recall.

Another Josh is a great example of a freshman that "thought" he knew it all. Josh Selby

Heck Dale, we might end up with 3 of the last 4 Rookies of the Year if Joel continues his season strong, and Josh keeps the passion. Alot can happen between now and then though. People would probably say Kansas and Kentucky are "buying" the ROY! :-D