Saturday, in his first start of his junior season, quarterback Montell Cozart threw an interception early in the game that looked about as bad as an interception can look.

As he dropped back and looked left, Cozart did not even seem to hesitate and fired the ball right to South Dakota State defender Dallas Brown, who caught it and raced 53 yards to set up another SDSU score. 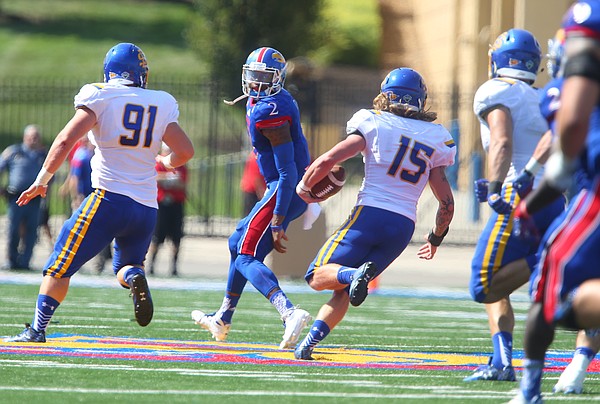 As these things go, the general perception was that it was a horrible throw by Cozart.

Presented below are Cozart's words about the interception following the game:

"It was a screen play, an inside zone play with a screen out there and we were trying to go so fast. We had 'em. We had 'em. The nickel was lined up all the way in the boundary and he was running over to the trips (side with 3 receivers) and our receivers, when they see someone like that, they don't account for him in their blocking and so the guy just ran right over and ran in front of the screen, but that's on me. I've gotta see right through him and throw the ball out of bounds or just hand the ball off.”

“He obviously had a couple of key errors in the game that we'd love to have back," Beaty said of his junior QB. "But the thing of it is, it's never one guy's fault. Boy, it sure looks like it is on the surface but the guy that caught that interception, he was supposed to have been blocked and we missed him. It looks like it's Montell's fault but ball security is not just a quarterback and a skill player's job. It's the offensive line's job, it's the center's job, everybody has a role in it. And when we don't execute correctly, things can go awry.”

It's just one play. And even though it turned out to be a pretty big one, both in terms of the momentum of the game and in the final score, the most important part of the interception and the lessons learned from it might have been the leadership and accountability that Cozart showed when asked about it.

It would've been very easy for him to explain the breakdown and, even without throwing any of his teammates under the bus, pass the blame onto someone else. But he didn't. Instead, he owned up to his part in it and even went as far as to imply that he should've been good enough to overcome the mistake and adjust into a better decision.

He wasn't, the ball was intercepted and Kansas lost the game.

But you can bet that Cozart won some serious points with his receivers and coaches for the way he handled it like a true leader when asked about it.

That might not get you points or win you games, but it can go a long way toward helping turn a program around.

It was sad how everyone jump on to montell about that interception and didn't know the full make up of the play. To me it looked like a screen and a good read by the LB to make a play on the ball. Obvously the tackle, guard, or center didn't get the block in time. But at the same time montell didn't give the play time to develope on the other hand. I understand KU wants to play fast but screen plays take time to develope you cant just rip a pass out there right away, at most wait 3-5 secs to give the OL a chance to give there fake blocks than get up field.

Yoy apparently don't understand how WR screens work is you think it's ideal for the QB to hold onto the ball on that play. Screen passes to RB's are when you need a few seconds and that's for the RB to get into space. The goal of screen pass is to isolate the person getting the ball into a 1 on 1 situation where it's up to ball carrier to make the defender miss. The OLine had absolutely nothing to do with the pick on that play. The blame on this play is on the two inside receivers who don't block anybody and allow the LB to jump the route. The LB deserves a bunch of credit as well because he abandoned his assignment on the play to make that happen.

I hope on your next "Sports Extra" episode one of you guys vote the KSU band as the most obnoxious people in sports.

It seems to me after looking at the postgame comments of Cozart and Beaty that they are in disagreement with regard to whether or not the nickleback should have been blocked.

Firstly, the fact that Cozart and Beaty do not understand the defense (and offensive blocking schemes) in the same way is a bit disconcerting. The QB is an extension of the coach on the field, and understanding the defense is a critical component in the arsenal of a quarterback in executing the offense.

Secondly, I can't find the video but it seems to me that the play was designed to be a bubble screen, with two receivers blocking two corners, creating a situation where a third receiver was put, hopefully, in a one-on-one situation with another defensive player down the field. If that's the case, Cozart's explanation is actually the correct one!!! The nickle was not supposed to be blocked, but he got the jump on the pass and "YES"...Cozart should have recognized it.

So I'm scratching my head at Beaty. If you have 3 receivers against 3 defenders, but one of your receivers is the intended target, how do you block all three guys? Cozart, I think, is to be praised for his understanding, but criticized for his lack of recognition in the game situation. You know how the play is supposed to be run but use your EYES, man!

Again, I can't find the video but if someone has it please post.

I found the video and I now understand clearly what went wrong. If you watch the complete second of 14:55 (pausing frequently to capture the flow of the play), what you notice is that two corners were lined up opposite two receivers, and as Beaty said they BOTH should have been blocked. Beaty is right! The play WAS IN FACT a bubble screen that intended to isolate the intended receiver against the safety who was lined up 15 yards off the ball down the field (on the 3 yard line). Had the nickle been blocked that play would have gone to at least the 5 and could have been a touchdown. It was an excellent play call, as you realize that the receiver would have gotten the ball in space and had room to run in the event that the pass was completed. *Incidentally, I actually shouldn't be using the term "nickle". Dallas Brown is a sam linebacker, though he was recruited to SDSU as a defensive back and is a versatile player with a lot of speed.

With regard to my above comment, in a 3-on-3 situation Cozart is right that you dont intend to block all three defenders, but he didnt recognize on this play, evidently, that the unblocked defender was the safety lined up more than 10 yards off the ball. This is the advantage that this bubble screen play is intended to give. So total failure on Cozart's part to recognize that that ball should not have been thrown.

On this particular play, it's the corner who's being screened, not the safety. Parmalee did his job blocking the safety, it's the inside receiver (I can't tell who it is) that completely missed his assignment, possibly because of how late the LB was in running out to coverage, and that's what allowed the pick to happen.

After watching the replay, I honestly think this was a bit of a fluke play because the LB left his assignment to risk making the play. I'm surprised KU didn't run that same look again except having the inside receiver run a slant or crossing route to take advantage of the LB's aggressiveness. That can probably be chalked up to the inexperience of the staff, but I do think a more experienced staff would've taken advantage to that LB's overaggressiveness.

I dont consider it picky. If the information is right, its right. Glad to be corrected.

Thanks for covering this Matt. This is one that we all know Cozart would like to have back, but I like how this mistake didn't balloon into a downward spiral.

You get credit for helping KU justify its action.

Worse yet is the opinion writer. Stability on Defense. All pure BS.