Does Air Raid = Air It Out? Eh, not exactly 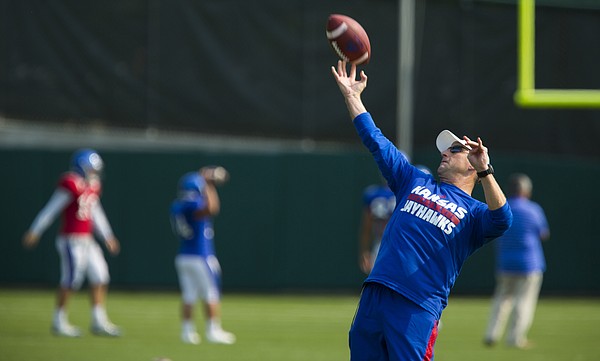 Just the name alone brings with it visions of long bombs, deep passes and footballs flying.

And while that might have been the way it was run in some of the more famous offenses that chose to run it, it does not necessarily mean that the team that utilizes it is going to air it out all the time.

Under first-year head coach David Beaty and first-year offensive coordinator Rob Likens, the 2015 Kansas University football team will run some version of the Air Raid offense this season. Our first look at it will come Saturday, when the Jayhawks play host to FCS foe South Dakota State at 11 a.m. at Memorial Stadium.

But a look back at what both architects of KU's new offense did during previous stops as offensive assistants at Cal and Texas A&M might provide a hint at a more balanced offense than one might expect.

The Kansas game notes claim that “Kansas' philosophy under head coach David Beaty and offensive coordinator Rob Likens is to run fast and put the ball in the air as much as possible,” but that might not be completely accurate.

The run fast part? Sure. Absolutely. Fast-paced, upbeat, relentless tempo will be a huge part of what KU's offense is all about under these two coaches.

But I'm not sure they'll look to put the ball in the air as much as possible. They might. But based on what I've been told about this offense, these guys are striving for a balanced attack that never lets up not a Mike Leach aerial assault that rarely runs.

Under OC Tony Franklin at Cal, Likens was a part of an offense that ran the ball 440 times and threw it 535 times during the 12-game regular season. That's an average of 37 runs and 45 passes per game and a run-pass split percentage of 45-55.

That's not exactly the stuff air-it-out dreams are made of.

Under OC Jake Spavital at Texas A&M, Beaty was a part of an offense that ran the ball 373 times and threw it 479 times during the 12-game regular season. That's an average of 31 runs and 40 passes per game and a run-pass split percentage of 44-56.

Again, not exactly a go deep and let it fly mindset.

Now, these numbers might be a little skewed because of lopsided scores and games against inferior opponents where the run worked and there was no need to throw too often.

But even with that being the case, those two offenses combined to call more runs than passes six times last season, with Cal doing it four times and A&M doing it twice.

Beyond that, it's not like Likens and Franklin or Beaty and Spavital are the exact same people and have the exact same minds when it comes to how to attack opposing defenses. But more often than not, guys who progress in the football coaching ranks tend to resemble and copy the guys they learned under.

Time will tell. And I, for one, will sure be interested to see what the final run-pass split looks like when Saturday's opener is over.

Hey Matt, Not sure if anyone else is having this issue, but I can't submit a question for your Friday Game Prep. Just me or a website issue?

Yeah, it's a site issue. Thought we had it fixed. Sorry. I'm bummed, too. I really like those Friday chats. But I've turned it into our tech guys and hopefully we can be back up and running for next week. Thanks for the heads up, John!

Ok, that makes since. Thanks!

I hope our offense is never identical to Leach's.