Uh oh: KU-Rutgers getting the wrong kind of attention 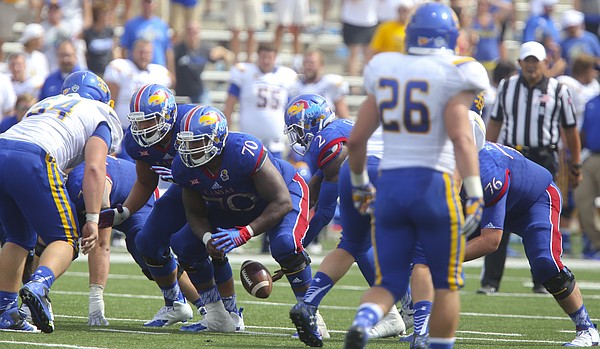 Kansas quarterback Montell Cozart (2) fumbles a snap behind Kansas offensive lineman Keyon Haughton (70) with seven seconds remaining in the game against South Dakota State on Saturday, Sept. 5, 2015 at Memorial Stadium. The error cost the Jayhawks an attempt at a game-tying field goal. by Nick Krug

They used to say these sorts of things about the annual KU-K-State battles but then Kansas State up and got good and now it's the Jayhawks holding down the fort for Sunflower State futility.

The Toilet Bowl they called those games. But now it might have gotten worse.

This weekend, when KU plays at Rutgers, two of the worst programs in the so-called Power 5 conferences will be squaring off in a game that both sides have to be looking at as a winnable and welcomed vision.

One problem: The rest of the nation has caught on to just how bad these two programs are at the moment and they're not afraid to poke a little fun.

Earlier this week, ESPN.com put both KU and Rutgers in the weekly Bottom 10 rankings, with KU coming in at No. 2 (just behind, or is it ahead of, New Mexico) and Rutgers sitting at No. 8. The outcome of this game could easily have a major impact on those standings no matter which way it goes.

And then Thursday, on the front page of ESPN.com, a feature titled, "Kansas vs. Rutgers is the game you have not been waiting for," ran near the top of the home page, bringing attention to the current struggles facing Kansas football.

Anyone who has followed this program at all during the past five or so years knows exactly what's going on. And, although it might seem like piling on to some of the KU fans who hold all things Jayhawks near and dear to their hearts, this kind of attention is definitely fair, even though it might not be a whole lot of fun for the Jayhawks.

Heck, even CigarAficianado.com has a Top 10 worst college football teams feature, with the Jayhawks ranking first and Rutgers in the "others receiving votes" category.

The good news about these two teams squaring off this week is that one of them has to win. And whichever one does will likely buy at least a couple of weeks of avoiding such negative publicity. Who knows? Maybe a win will even springboard some confidence and get things going in the right direction a little more quickly.

For now, all we do know is that these rankings and this kind of attention, though cruel, is absolutely justified until further notice.

Justified...and welcomed by me. Let the crucible of public scrutiny create the appropriate environment for change. There is no good reason for a prestigious university in a power conference to put out a football team that has been as consistenly bad as KU has been. As one of those rare birds that follow KU football more than KU basketball ( and have for over 30 years), I'm ready for the entire culture to change. Its not too lofty to expect excellent football at KU. Apathy and/or satisfaction with being a "basketball school" is not acceptable.

David, I believe the winds of change are in full force. I also believe Beaty and the stafff in place are key to that change, and given time and decent recruiting classes, it will all pay off. Patience is an overused word of late (for Gill and Weis) for the KU football program, but that's exactly what we need with a staff that can truly effect change. I'm willing to give Beaty the time he needs, provided we see improvement as we go, know matter how small.

Nicely said David. You are not alone.

Rutgers was a 13 pount favorite last I checked and I would be legitimately tempted to take that bet, not the outright win, just KU covering.

"The game is 90% mental and half physical" - Rob Likens

"You can observe alot just by watching" - Clint Bowen

"We made too many wrong mistakes" - David Beaty

Yogi was born and raised in St. Louis. When asked about his favorite restaurant back home, he said "Nobody goes there anymore, its too crowded"!

I mourn the loss of Catcher, Champion, and Hall of Famer Yogi Berra.

My favorite memory of Berra came from attending a Yankee/Athletics game at the old Brooklyn Avenue stadium in 1961: first inning - Bill Skowron homers. Mickey Mantle homers. Roger Maris homers. And then there was Yogi Berra at the plate. He swung at a couple of bad pitches. The he swung at a low-and-outside pitch and knocked it over both walls out onto Brooklyn Avenue...like it was nothing! He was having a ball...

Four homers in a row? Sounds like the old As. Speaking of futility. Then they move to Oakland and win a bunch of World Series.

One of the most unique sports personas of all time. Three-time MVP, too many world series rings to keep track of, something like 10-plus 20 homerun seasons (pre steroids)....the guy was an absolute ace of a player. And yet, hie public image was one of a lovable goof.

Boy, could we use someone like him in this day and age of sports prima donnas. No surprise that he and Jeter became fast friends - two guys who got it.

Must have been on his word of the day calendar.

Here's my personal link to an evaluation of ESPN: www.svpegomaniacaldbag+worstwebsitein...

I agree with the fact that our football team is not a quality one at this point. I also agree that it's not something that is a 1 or 2 year blip in the map. We've been horrible for long stretches with a good season here and there in my 35 years on this earth. I understand the articles and the feeling that our football team looks like a historically bad team......... that being said. It is not like this is front page news and it is not like it's a big national story. I don't see the need for these writers to write articles like the one written yesterday. I personally feel like it is a bit disrespectful to the players and coaches working their butts off to turn around what GIll and Weis created. I do not see the need to kick these guys while they are down and basically make fun of them on a national stage. Rank us in the bottom 10, I'm cool with that. Predict us to lose all games by 40 points, no worries....... but to poke fun of our program and kick these kids while they are down and working hard seems a bit salty and egotistical to me. This reeks of a guy trying to up his reads, by doing exactly what has become the accepted norm in our society, which is to make fun and demean anyone they feel like to grab a few reads. I read that story and my blood was boiling the whole time. How about the fact that we have some young guys that look like they could develop into solid players to help turn our program around. How about the fact that we have a running back that looks the part of a legitimate All Big 12 performer, in spite of our awful play thus far. How about mentioning the fact that we've got some high profile recruits that are legitimately interested in our school because Beaty is recruiting his rear off and has shown these kids that we are headed in the right direction. All I'm saying is that maybe we could use a little less negative articles about our team and a little less kicking the horse while he is down. Be a human being and respect all others and their efforts, because those talking smack are not perfect in their lives either.

We have NOT solved our problem. It is Coaching Defense. Looks like we can go on forever, and not make a first class attempt