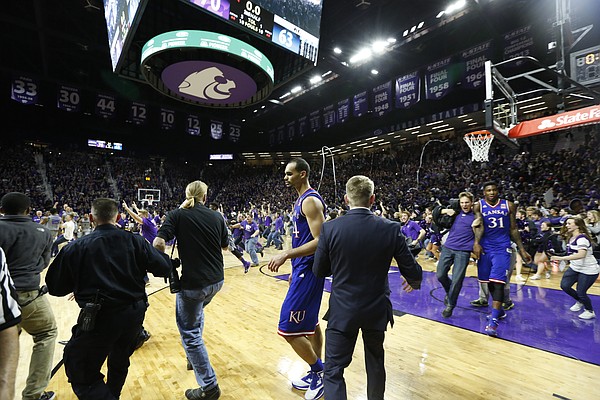 In this sequence of images a court-rusher checks Kansas forward Jamari Traylor on his way toward the Kansas players before being temporarily stopped by security. by Nick Krug

Not too long ago, the Big 12 Conference's spring meetings were all about conference realignment, athletic directors and presidents ducking out of back exits and reporters stalking the halls of some hotels near the Plaza in Kansas City, Missouri, hoping to discover some sort of breaking news.

Times have changed since then, of course, and with the spring meetings back in Dallas, some pretty interesting breaking news was dropped into the laps of the laptop jockeys in attendance.

Big 12 commissioner Bob Bowlsby on Wednesday announced that the conference had passed a measure regarding potentially serious penalties for court-storming following men's and women's basketball games. This, no doubt, was a reaction to the scene that unfolded last winter in Manhattan after a K-State victory over KU in which Bill Self was pinned against the scorer's table and Jamari Traylor was trucked by a wild KSU fan.

Although there are not specific consequences laid out for court-storming incidents the way there are in the SEC — where the schools are fined increasing amounts of money depending on the number of the offense — Bowlsby said he has been given "broad authority" to implement penalties against programs who can't keep their fans off the floor.

Now, obviously this never has been and likely won't be an issue at Allen Fieldhouse, where court-storming just doesn't happen these days. But it's definitely an issue that the rest of the conference should and will take note of, especially when KU comes to town. It's been an all-too familiar scene in recent years to see home fans storm the floor after their squad pulls off the upset over Kansas. Heck, some of those schools have even been ranked in the Top 20 and still seen their fans storm the floor after the emotional win over the conference king.

So be it. But when things boiled over to the point of physical harm and/or danger for the visiting players, something had to be done and the Big 12 has done it.

Bowlsby said the penalties could range from fines to the loss of future home games, both of which surely will get the attention of administrators, coaches and even fans throughout the league.

According to Big 12 rules, it's the responsibility of the home team, not the league, to protect players and team personnel in the event of a court storming.

Bowlsby having the power to hand out such severe punishments should future incidents occur, should create an environment free of rushing the floor throughout the Big 12 in years to come.

Tis' a somber day for one Manhattan, KS. Keep them in your thoughts and prayers.

The proper reference is "Walk the talk."

Walk the walk makes no sense. 😉

umm. no. Clearly you can talk the talk, but based on this comment it appears that you cannot walk the walk.

However I think we can all agree that we collectively can Rock the Chalk. Which is much better than block the...well, I digress.

A rather ambiguous "policy" like this one is useless. Why give the commish broad authority instead of doing like the SEC and implementing automatic fines? The loss of future home games will NEVER happen.

I would guess it's because he then would be able to assess the severity of the storm. For instance, there's a big difference between the Oklahoma State court storms of recent years and the one we saw in Manhattan last year.

Bottom line: The threat of that kind of penalty should inspire the schools to take every precaution.

I agree Phil. I would prefer a more strict procedure for punishment. This is the same reason why Roger Goodell is taking so much heat. Because he bestowed upon himself the role of judge and jury. He determines what's a violation and what the punishment is for each situation individually, and when similar violations get different punishments it is unfair.

I have a hard time believing that the commish would take away a home game from a school. So we would have played KSU at home two times next year? I can't see it happening. Just fine the school or have them give their ticket revenues back to the league office. It's not only unfair to the players who's fans stormed the court (they only get 8 home games), it's also unfair to all of the other teams in the league who only get 9 home games while the team that was victimized by court storming gets 10. With that kind of punishment, Kansas could potentially go another 11 straight years as conference champs.

I guess the best way to avoid court stormings at our away games is to just not lose to those teams on their court.

I'm with Phil on this. It would have to be something really bad to result in a home loss assessment. The approach is a measured one to see if the threat of penalty is enough. It will happen again. It just takes the right situation with the right teams on the right day or night. Why? Because crowd (mob) mentality and passion rule over cerebral consideration and consequences in the context of battle/conflict. Why do normally law abiding citizens get caught up in road rage and do things they would never do at any other time?

What about storming the football fields? Is that included? What is the danger of goal post take downs?

I'm thinking that when they are discussing a loss of a home game, that it would be on the non-conference portion. Losing a conference home game affects everybody within the conference.

Actually, I think it means the "home and away" would become "away and away" the following season. The offending team loses their home game. The opponent gains another home game. In that scenario, there would be no net effect on the league as a whole.

there is an effect on the league. The rich get richer. What if TTU storms the court against ISU and the following season with one extra home game, ISU wins the league by 1 game. With the power to give specific teams an advantage in league play, the Commish could create a situation where he can impact the outcome of games and of the league race.

So there are two problems with it. 1) giving one team a 10th home game in league play puts all 9 other teams at a disadvantage, and 2) (this is the bigger problem) granting full authority to the commish to determine what warrants loss of a home game and what doesn't creates a situation where the commish can award advantages to a team who was stormed if he wants to or not do it if he doesn't want to. He can attempt to fix the league race based on teams that get court-stormed. Obviously this rule will benefit Kansas more than anyone else right now because we get the most opponent court-stormings.

There is no certainty that it would be KU who was "offended against."

In the "loss of a home game" assessment, don't reward the offended team with an extra home. Play the schedule game, but at neither home arena. Pick a high school gym with no game scheduled and play the game with no crowd – no press or TV would be even better – any broadcast to be after (at least) 24 hr. delay.

Something with significant penalty, with out any reward. Please, please before the necessity of dealing with physical harm or worse.

The headline to this article is misleading. The Big 12 didn't set anything in stone regarding court storming, so there's nothing here that is actually worth writing about. Looks like Matt Tait is taking a page from Tom Keegan's playbook and trying to troll us with sensational headlines.

KSU never shows up to any home games that doesn't involve KU, why would they care if they lost one?