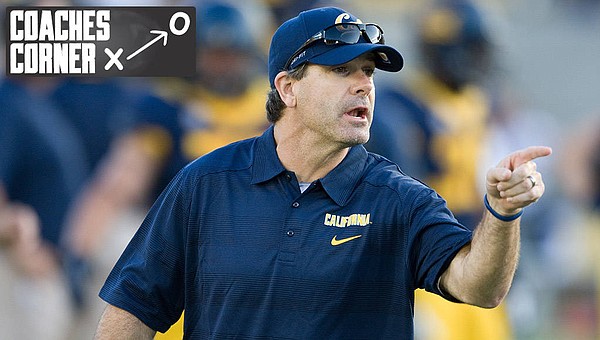 Former Cal assistant Rob Likens is headed to Kansas to be the Jayhawks' new offensive coordinator. (Photo from calbears.com) by Matt Tait

Given last night's news that Rob Likens was coming to Kansas to join David Beaty's staff as the Jayhawks' offensive coordinator, I decided it would be worth asking around to see what I could learn about Likens, who comes to KU on the heels of a decade working with Cal coach Sonny Dykes, who is known for running the Air Raid offense.

I first heard about Likens coming to Kansas from a source on Monday evening. A little later that night, Dykes confirmed the news to a couple of media outlets in California. So even though nothing official has been released by KU, this is a done deal.

KU fans have waited with great anticipation for the identity of Beaty's OC, and now that we know who he is, let's take a little deeper look at what he's about. It did not take long to find people, both in and out of the coaching profession, who had good things to say about Likens, both as a football coach and a person.

Energetic, genuine and a lot of fun were three of the phrases that came up most often and, a quick Google search on Likens uncovered a couple of videos on YouTube from when Likens was mic'd up during a couple of Cal spring practices last season.

Practice is certainly different than game day and coaching the Golden Bears' outside receivers carries different responsibilities than running and calling an entire offense, but these videos give you a pretty good look at what Likens is all about.

There'll be plenty more to learn about Likens in the next several days, but this is as good of a place to start as any.

I wish I had a coach just like this, everyday at work!

I think I'd be pretty happy to even just work outside every day! Well, maybe not today, it's like 0 degrees in Omaha...but most days!

Definitely will be tested next year. A very, VERY real possibility that Kansas wins only one game next year. Or none! Non-Con games versus Memphis and @ Rutgers. YIKES!

It's tough to schedule cupcakes when you're worse than everyone else, but I hope Beaty starts scheduling some really bad teams in the non-con.

The one area I think KU would've been better off had they kept Gill was the depth of the program. I don't think ththe W-L record would be any better, probably worse IMO, but Gill did focus on bringing in a lot of HS kids which would have KU in better shape depth wise than they are now.

Aaron, Gill would bring in 2 kids and 1 of the two would be lost for drugs or not attending class. The kind of culture he established is the reason Weis had to clean house and start over.

I agree Weis had a poor vision for the offense in college but our roster has good solid kids on it at least. They are a foundation Beaty can build on instead of running them off.

yall got some good coaches .. hate to see them go .. treat them well