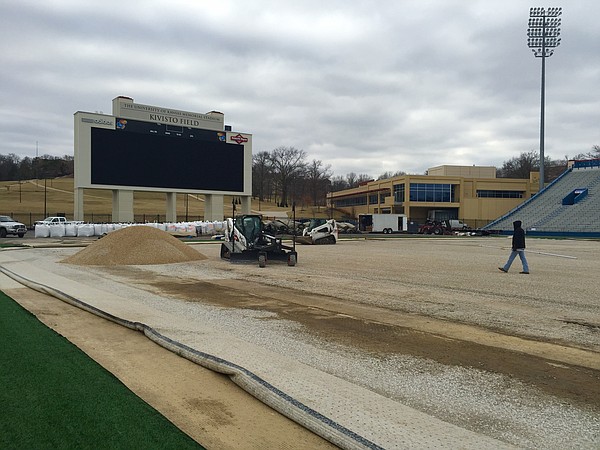 Construction crews in charge of installing new turf at Memorial Stadium work to level out the playing surface on Thursday, Jan. 29, 2015 by Matt Tait

Construction crews and Bobcats have taken over Memorial Stadium. But, no, it's not the start of any major stadium renovations that KU fans are dying to see.

Instead, the Kansas University athletic department is replacing the turf at Memorial Stadium in preparation for the upcoming spring football season.

The old turf, which already has been completely ripped out, was installed in the spring and summer of 2009 and the new turf, which went down last summer in place of the old track that was torn out following the completion of Rock Chalk Park, will remain in place. When the project is finished, which KU officials said would be in time for spring practices, the two shades of green will match better than the turf did last season.

Work on the project began last weekend and the construction crews are currently in the process of re-leveling the entire field.

Once the new turf is installed, it will look nearly identical to what you saw last season in terms of logos and end zone markings, with the only exception being a six-foot white border surrounding the playing field instead of the 18-20-inch border that had been there. The thicker boundary is more in line with what the rest of the Big 12 Conference stadiums have in place.

According to a KU official with knowledge of the project, the new turf is expected to hold up for around eight years.

KU associate athletic director Jim Marchiony said the cost of the current project is around $200,000, less than half of last summer's $500,000 price tag to remove the track and put turf down in its place. That project was paid for by an anonymous donor.

Here, have a glass of Koll Aide

Hey KU, why not spend many more hundreds of thousands on this bull* program? And LJW why don't you guys jump to support it? KU has spent millions and millions on a program that is still last place. Why don't you demand a few wins before further investment? Where's the oversight?

Well, though I was hoping and holding out for a new/more fearsome looking Jayhawk on the 50, it will be nice to see the new turf. Now, is there any left in that Donor's budget to pay for a coat of paint, and a couple more TV's in the concession areas? I know that's not a major overhaul, but it would be nice to see.

I am really looking forward to the article titled, "New Stadium Being Installed at KU's Memorial Stadium."