The Day After: Near-perfection in Austin, Texas 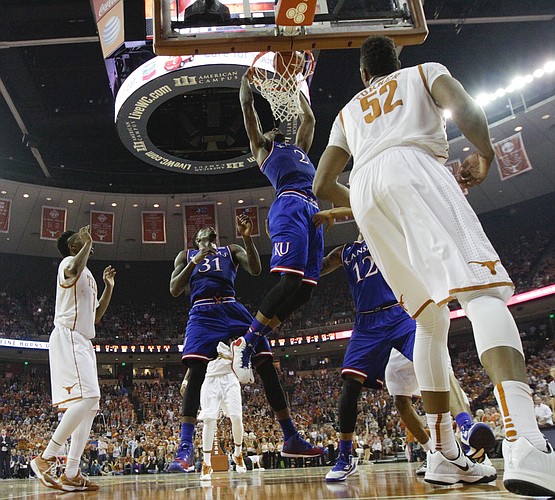 Kansas forward Cliff Alexander (2) gets a slam on a put-back dunk against Texas during the first half, Saturday, Jan. 24, 2015 at Frank Erwin Center in Austin, Texas. by Nick Krug

By several accounts, Saturday's 75-62 victory over Texas in Austin was the Jayhawks' best game of the 2014-15 season.

It's hard to argue that. So many positive things went in KU's direction, with a convincing victory over a solid team being the result. The game was on the road and against a Top 20 team. Kansas turned it over just three times all game and did not cough it up once in the second half. The scoring was balanced. Newcomers and veterans contributed equally and Bill Self's crew showed toughness, confidence and even a little swagger.

The Jayhawks made 15 of 19 free throw attempts, recorded more assists and steals than the Longhorns and limited UT to 40 percent shooting, including a 3-of-18 mark from three-point range.

I'll be honest. I thought this would be another Iowa State game, where the home crowd and talent on the opposing bench proved to be too much for the young Jayhawks to overcome. But maybe it was just the opposite. Maybe it was exactly the kind of game this team needed to allow it to believe that what happened in Ames, Iowa, one week earlier was closer to being a fluke than the norm. If that's true and these guys just turned up the belief they have in themselves, the Big 12 race might be over.

So much has been made lately about Cliff Alexander's motor and how important his play is to this team. But would anyone argue that Brannen Greene's motor — or maybe just his head — might be equally as important. The sophomore guard has been sensational in KU's past two games, both tough victories over Top 20 teams. And those efforts came less than a week after it looked as if Greene might be out of the rotation for good. I guess the lesson here is that it's dangerous to write off a guy too early when he has this kind of talent. Bill Self certainly did not do that with Greene and KU is reaping the rewards because of it. If the past two games — and the lessons that were learned leading up to them — are any indication of where this team is headed, Greene and Alexander, all of a sudden, seem to have vaulted to the top of the list — right behind Frank Mason — as KU's most important players. Oh, and while KU was doing its thing in Austin, TCU was taking West Virginia to the wire in Morgantown and Texas Tech was getting ready to knock off Iowa State in Lubbock. Just one week after a loss at Iowa State seemed to blow the Big 12 race wide open, the Jayhawks have jumped right back into the driver's seat in a big way. 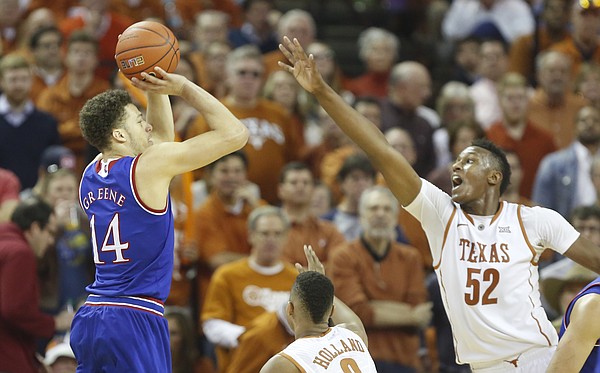 1 – Cliff Alexander held his own personal dunk party in Austin. Yes, Alexander's motor was revving high for the second game in a row. And, yes, that was by far the most important part of his game. But the fact that the big fella looked ferocious while playing again is nothing but good news for the Jayhawks. Alexander looked eager to try to dunk everything he could in this one. Maybe it was the challenge of playing against the bigger front line the Longhorns possessed. But if the KU freshman can find a way to channel that same attitude against teams that aren't as big as Texas up front, he could be in for some monster games in the very near future. Props also to Alexander's teammates for so often putting him in good positions to finish strong. 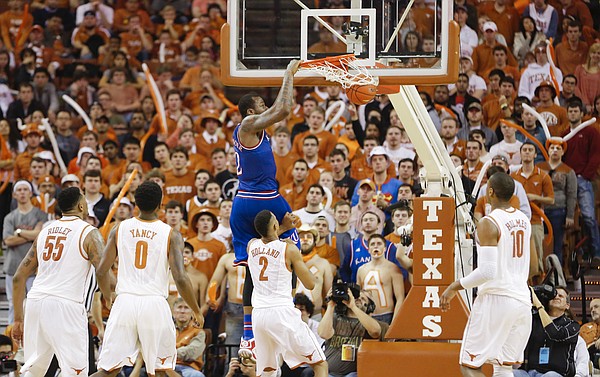 2 – Jamari Traylor's effort alone on that wild play toward the end of the first half was worth a high grade for the entire game. Yes, Traylor hustled to get a block shot on one end, crashed the boards on the other and dove out of bounds after both stretches. And, yes, Traylor's all-out dive at halfcourt was the kind of play Self will be telling young players about for years. But the most impressive part about the whole thing to me was that it started with Traylor getting his shot blocked. When that happened in the past — and even in the not-too-distant past — Traylor had a tendency to show bad body language and let the bad play momentarily take him out of the game. It looks as if Traylor is growing and maturing. 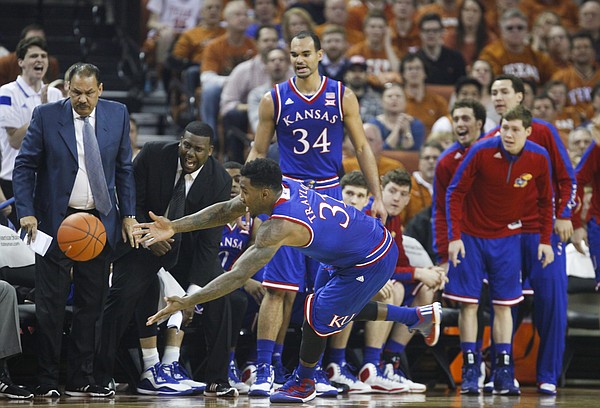 3 – So much was made about UT's length heading into this game, but how about KU's length coming through for the Jayhawks. Not only did Kansas pick up some blocks and steals because of its ability to stretch out defensively, but the Jayhawks also really benefited from their length on the offensive end, as well, whether that was Cliff Alexander flushing shot after shot or Kelly Oubre finishing at the rim. The Longhorns did finish with nine blocks, but it's a real credit to the growth and maturity of this Kansas team

*** Disclaimer: We were really forced to reach for negatives after this game.

1 – Because the rest of the game turned out so well, people probably won't remember KU's 11-2 deficit to open the game. And why should they? As soon as Brannen Greene got going from the outside and Alexander and Perry Ellis picked things up inside, KU dominated. Slow starts like that are usually a recipe for disaster on the road, so they still fit in the category of reasons to sigh. But if KU can overcome any future slow starts the way it did in Austin, even an early double-digit deficit won't make its way onto this list. 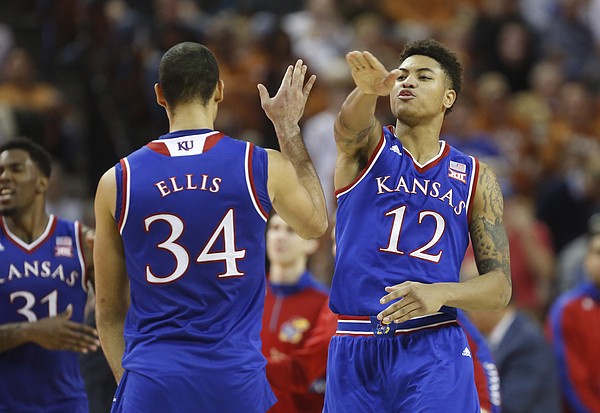 2 – KU was out-rebounded, 36-34, and gave up 13 offensive boards to the Longhorns. Like I said, we're nit-picking here. If anything, hanging in there with the Longhorns on the glass shows just how well KU played up front. The Jayhawks matched UT on the offensive glass and had five different players record at least three rebounds. 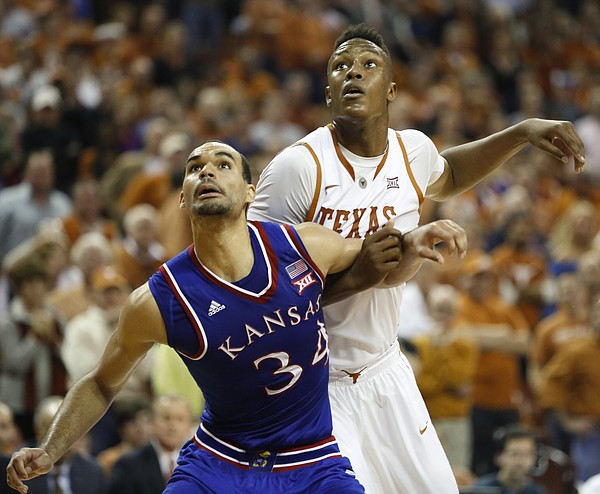 3 – Wayne Selden's shot is still not quite right. Remember early in the season when Selden was in a big-time shooting slump that got a ton of talk? He snapped out of that one and then that was that, but, as much as things have gotten a little better since then, he's still not completely there with his shot. Selden's shooting percentage in the first six conference games of the season is just 34.6 percent (18 for 52) and that includes Saturday's 2-for-6 performance against Texas. Credit Selden for doing enough “little things” to remain an important part of this team even without clicking on offense, the most notable of which is probably his defensive toughness.

• Added to KU’s all-time series advantage as Kansas now leads 24-8, including a 7-6 mark in Austin (all games in the Erwin Center). 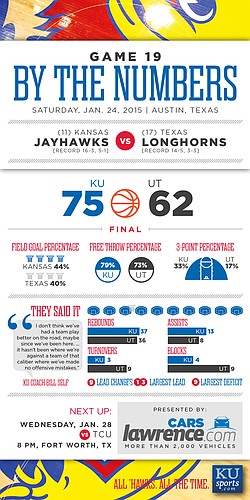 Selden was showing a ton of energy on the defensive end, even drawing comments from the TV announcers. It was extremely interesting that Self let BGreene close out the game instead of Wayne. Going with the hot hand.

Biggest PLUS of the whole game going forward, was the defense played by BGreene. I actually saw him bend his knees in a proper D-stance. Oh, the joy of seeing the light bulb go "on" in a kid's head...(at this point, we all know almost exactly what Self is wanting out of each position...).

Sweet Win. I also think in a few important ways, this team's abilities and talents are pushing Self's mindset and comfort zone. This may get WildBill outside of his own predictability...which is bad news for opposing teams.

Hey Erich, I appreciate this comment and insight. I wasn't able to watch the game, only the score as I was at work. I was surprised to watch as BG played down the stretch of the game and was wondering if he had been playing better defense this game to get those prime time minutes or if we were just really hurting for some offensive production. If he can put together some even mediocre defense, he will be a key player for our run this year. Having a taller guard with a quick release and endless range is a luxury we have not had recently and I'm excited to see him coming on. I haven't been a huge BG fan in the past because of his defensive woes, but if that is changing then I can definitely jump on the bandwagon.

And it must be said, as it is truly astonishing: 3 T.O.s for the game is simply unbelievable. Is it duplicatable? Just imagine if we had 5 more turnovers (8 total)--> that meant 5 more possessions for TX, and with them shooting 40%, it could have made for a 2 possession margin at the end instead of the 4-5 possession margin.

Not just that, but two of those turnovers were just silly mistakes by our guys. One was a good idea, but the pass was just to hot to handle. The other was our guy dribbling it off his own leg. Texas only forced one turnover against us. On the other two, our guys made the right decision. Traylor drove the ball from the free throw line and lost it off his leg. The other was actually a good pass from Selden that Alexander wasn't ready for. There would have been at least 5 or 6 more assists if we didn't miss some of the dunks we missed.

All of the players made good decisions with the ball and their awareness of where the defense was was as good as it can get. They didn't dribble themselves into traffic in the lane. They took what was there while also forcing Texas to defend. Sometimes Texas won those little battles and sometimes we did, but we won the game.

I hesitate to call this nearly perfect because we left some points on the court and there were some loose balls that we could have had. There were some sequences where both teams just had all out battles for loose balls. A year of strength conditioning, if all these guys return next year, and we'll win most of those battles. We shot 33.3% from 3 pt range which is below our season average and we shot about 46% from the field overall. To me, this isn't near perfection. In close games, the difference between 46% and 48% shooting percentage can be the difference between a win or a loss. If we're going to beat a team like Kentucky in the tourney, it's gonna be a close game throughout.

This was the best game we played all year though. I don't think there is any way to argue that it wasn't. It's not as good as we still can be this year though.

Matt, according to ESPN and CBS, the stats for the KU-Texas game, KU out rebounded Texas 37 to 36.

Selden seems to be hitting his threes and does a lot on defense. When he drives to the basket however, I would like to see him attempting fewer show stopper dunks and just make the shot be it a simple layup or a mid range jumper. Consistently scoring will not only get KU more points, but also the eye of NBA scouts