A pair of former Kansas University cornerbacks became the first NFL teammates to be selected for back-to-back Pro Bowls in 25 years.

Denver Broncos Chris Harris and Aqib Talib, who helped the Broncos field one of the league's top ranked defenses this season, earned the Pro Bowl nod for the second year in a row, the league announced Tuesday night.

Harris, the un-drafted free agent who has gone on to become one of the most productive and stingy cornerbacks in all of football, has started all 14 games for the Broncos this year and has totaled 52 tackles (43 solo), two interceptions (94 yards), four passes defensed and two forced fumbles.

He becomes one of just five un-drafted cornerbacks in NFL history to make multiple Pro Bowls with his original team.

Like Harris, Talib, now in his second year with Denver, also has started all 14 games for Denver and has totaled a team-best three interceptions (123 yards, 2 TDs) and 13 passes defensed to go along with 38 tackles (33 solo).

Talib was picked to the Pro Bowl for a third consecutive season, as he also earned the honor in 2013 as a member of the New England Patriots. During his three-year run as a perennial Pro Bowler, Talib is tied for fourth at his position with 11 interceptions, including four returned for touchdowns.

After having a league-best nine players selected to last year's team, Denver (10-4) had just four this season — pass rushers Von Miller and DeMarcus Ware also earned the nod — and the once powerful Broncos' offense was shut out of the all-star showcase.

After another hot start, Denver has dropped two games in a row and seen its lead in the AFC West shrink to one game over the red-hot Kansas City Chiefs with two games to play. 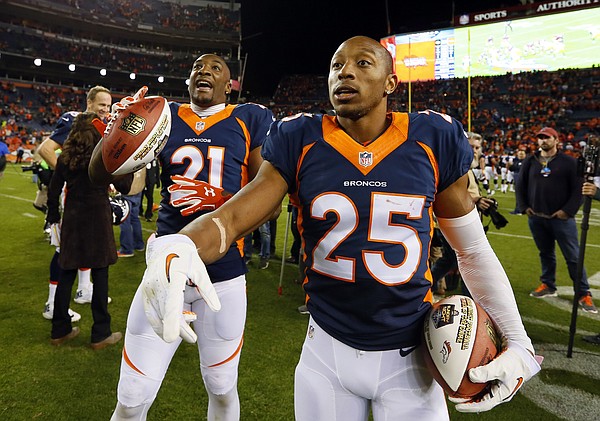