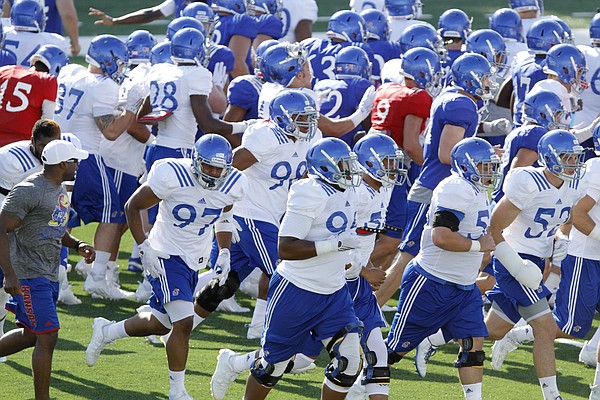 After a day away from the practice fields, the media — along with any KU fans who wanted to show up, of which there were a few hundred — got back out there for a good look at an entire practice on Fan Appreciation Day.

This wasn't one of those come watch us run through 2 hours of special teams practices either. It was a legit look at the way the coaches coach and how hard the players are working.

A big part of the reason behind that is the insane amount of competition at most positions on the team. With 18 offensive linemen, nearly as many wide receivers and more than a dozen defensive backs — many of them new to the program and very green — each rep is like gold to these guys. Their effort shows they understand that and their coaches demand it.

Here's a quick look at a few of the things that caught my eye at Saturday's extended look at practice, No. 3 of KU's preseason camp.

• This is typical of most camps but you can't help but notice it. A few guys were sporting new hairdos, either via a fresh cut or a some kind of dye job. The guys who stood out the most were tight end Ben Johnson, who, perhaps wisely, saved the new look for after his trip to Big 12 media days in Dallas, Free State grad Joe Dineen, linebacker Schyler Miles and Beau Bell.

• Given that KU is so thin along the defensive line — it's worth noting that earlier in the day KU coach David Beaty said he felt OK about KU's D tackles as long as they stayed healthy. He even knocked on wood — I thought I'd go take a peek at what D-Line coach Calvin Thibodeaux was working with. A couple of things stood out. First off, Kapil Fletcher has pretty good size. Not only is he the tallest of the bunch but he's also got legit bulk and moves pretty well despite being the biggest D-Lineman KU has. He has enough experience for it to matter so him staying healthy will definitely be important. Another D-Lineman who looked good was second-year player Jacky Dezir, who looked lightning quick and moved well laterally.

• At that same D-Line drill, I noticed Kellen Ash had moved over to play with the defensive linemen and defensive end Anthony Olobia was there but defensive end Damani Mosby was not. Earlier Saturday Mosby told me that he and Olobia were battling at the same position so it's possible that Olobia was working with the interior guys because the coaches were/are searching for possible ways to get the both on the field at the same time.

• During the team portion of the practice, I got a quick look at what appeared to be the first-string offenses and defenses, at least as things stand today. Here's how they lined up:

• Speaking of Barbel, he made one of the plays of the day, a spectacular diving catch near the corner of the end zone on a deep ball thrown by Deondre Ford as a Chevy Graham defended him. After the grab, UAB transfer Quincy Perdue, who backed up Beaty's claim from last Thursday that he might've been the guy with the most energy, pointed to Barbel and then ran toward him while the drill continued to do one of those jump-in-the-air-and-bang-shoulders moves. The catch was big-time, though, and deserved it. As for Perdue, he looks good. Big body, big frame, big hands. He's got a chance to be a very nice player.

• It's too early to tell how much this means, but beyond Parmalee, Stanford and Barbel, the wide receivers lined up like this during their reps: Twos – Tyler Patrick, Darious Crawley and Derrick Neal (three members of last year's incoming receiver class). Threes – Quincy Perdue, DeAnte Ford and Steven Sims Jr. After that, freshman Chase Harrell jumped out there, so like I said, it's hard to know if this was a depth chart order or just a random order.

• One good thing about having all of these wide receivers who need reps is it gives the KU quarterbacks — all of them — a bunch of extra reps, too. Obviously Cozart, Carter Stanley and Ryan Willis would get their share of reps, but this scenario allows Keaton Perry, Deondre Ford and T.J. Millweard to get a bunch of reps, too.

• Speaking of the QBs, it was just one practice, but here's how it broke down for me in terms of pure arm strength – Ford and Willis are at the top with Cozart just a tick behind them and then Stanley. I'll use this as a baseline to track things as we continue to head out to practice throughout camp to see if my initial read was right. I'll also ask some of the coaches and players.

• One of the last drills I watched today had the Jayhawks working on their screen game. Quick hits to the flat, the ball came out quickly and the two receivers on the outside immediately blocked downfield to create a running lane. They only did this for 5-10 minutes but more than a couple of times during the drill I heard offensive coordinator Rob Likens get on guys for making too many moves. “No dancing,” Likens yelled. “Just go.”

• KU is off on Sunday and will get back out there on Monday for the fourth practice of preseason camp. We'll be out there with 'em.

I am far from an expert but what I noticed most:

1.) Cozart seems to be more patient but needs to continue to work past throwing behind his receivers on short routes and particularly at their heels.

2.) Matt, you failed to mention Millweard who had almost as many reps as Cozart but oddly had 2-3x as many great passes and better timing. I often found myself smiling as the receivers gave him props for making them look good after getting back to the line. I know he has been here as long as any QB, but it appears he has the team confidence.

3.) The O-Line really kept getting torched on their protection drills on the 50 nearing the end of the practice. I know there is much to do and I have confidence in Zack to coach them up, but it seems that the D-Line has a bit of a jump on them so far. That was evidenced by the blows thrown out of frustration of being beat, and what appeared like the coaches calling the drill to allow cooler heads to prevail.

4.) Tre' had some really great catches and harkened back to his first year here at KU. I wonder if this staff will finally give him a chance to show his stuff. I am not in practices and cannot know why past experience has kept him off the field, but he really showed today why he should be out there.

5.) Willis seems have a calm, cool head (from the one practice I have seen, ha!) but while I watched all other QBs have "happy feet" out there, he really seemed to go out and get work done and rotate out. Who knows how that plays out but I was most impressed with Willis and Millweard today. Stanley looked good at times too but still seems to be a work-in-progress. Much has been said about him being a potential starter but after today, my guess is he is currently 4th on the depth list at least. The talent is there in spades though it would seem.

6.) Kinner is a man. They were playing touch today but I watched him many times squirt through small holes and find open spaces before the whistle was blown--they couldn't find him or he would blast the defenders if they were huddled. Could he have us saying Avery who? He runs down hill!

7.) Chase Harrell had some of the more unheralded yet impressive long grabs of the day. I will enjoy knowing more of what you see further in camp from him.

8.) The kicking game looks up for grabs but for once in a few years, I think we have options.

Thanks for all you do Matt. You are always tops on my list!!!

On your OLine observation, if it was during the portion where they were running the screens, that's what's supposed to happen. You hit the DLine player once and let them go so they are up field past whoever the screen is going to.

If it wasn't during the screen portion, then that is troublesome but unfortunately not surprising with so many new faces on the roster.

Actually, it was the drill on the 50 near the home bench when they lined up and the job of the offense was to keep the D from tagging a trainer (simulating a QB).

I am glad to hear Millweard is playing well. I just wonder why he isn't getting a chance at the #1 spot while getting passed up on the depth chart by two freshman.

Matt, the most interesting part of your article was when you discussed the new hair styles. KU is the worst team in the FBS. They may not win a game this year.

The most interesting part of your post was when it ended.