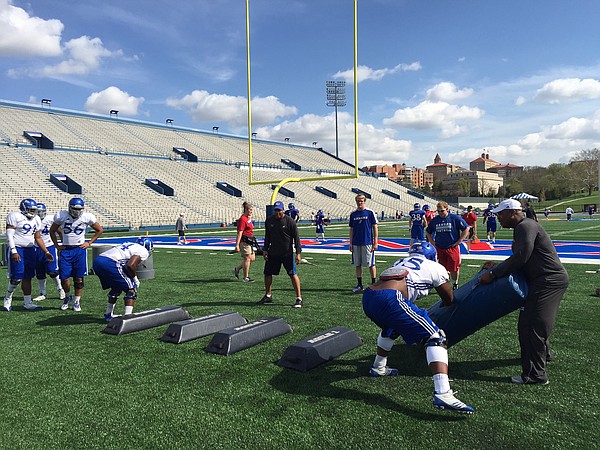 D-Line coach Calvin Thibodeaux works the bag as Andrew Bolton works on footwork and getting off of a block during Thursday's practice. by Matt Tait

I'm not sure why but I've kind of overlooked the defensive line this spring — at least in terms of how often I've watched them work at practice.

Maybe it's because we've heard so much about how the D-Line is one of the strengths of the team and so many of those guys who play up front are familiar names — Ben Goodman, T.J. Semke, Andrew Bolton, Kapil Fletcher and others.

With that said, I made sure to go stand down there on Thursday at spring practice No. 10 and I'm definitely glad I did.

Not only was I impressed by what I saw — these guys really look to have good footwork, great get-off and solid work ethic — but I also was entertained.

Calvin Thibodeaux was a solid player on a few really good Oklahoma teams. From the look of things, he's also well on his way to becoming a solid coach and maybe even a comedian.

During one drill, in which the D-Linemen were working on lateral movement, a couple of guys stumbled over the bags on the ground. Thibodeaux let 'em have it.

“Don't whoop 'em, bags,” he kept yelling. “Oh man these bags are tough, aren't they? Glad we don't play the bags on Saturday.”

Ribbings like those were seemingly endless, but they all were done with a purpose — to motivate the guys to prove Thibodeaux wrong. Like I said, they've got great work ethic and I can't help but think that's where some of it comes from.

Here's a quick look at the rest of what caught my eye on Thursday:

• During Wednesday's meeting with the media as I was talking with offensive coordinator Rob Likens, special teams coach Gary Hyman came over and pointed something out to me that I had never noticed. “Greatest hair in all of NC-2A right there,” Hyman said as he messed with Likens' 'do and walked away with a laugh. In the interest of being thorough, I decided to take a closer look at Thursday's practice, but was foiled. See, Likens most often wears a hat out there at practice, so he wasn't letting anybody see the locks. Guess we'll just have to trust Hyman on that one.

• Speaking of assistant coaches, co-defensive coordinator Kenny Perry donned a little something extra to get his point across to his defensive players at Thursday's practice. Instead of just yelling things to help leverage like, “Bend your knees,” and “You're too high, you're too high,” and “Stay low, get down,” Perry wore a long sleeve T-Shirt with those instructions plastered across the front. Bend. Your. Knees. It's one thing to bark orders, but it's another to remind guys constantly even when they just look at you.

• One more note about Hyman, whom you've already heard has an incredible amount of energy. During a kickoff return drill, one kick returner caught the ball, rolled up the right side and then cut it back to daylight on the left side and broke free. Now in a game that might not be frowned upon. But at Thursday's practice, that wasn't the case. Hyman lit him up for cutting it back because the drill they were doing was designed to work on blocking assignments with a right return. Cutting it back does not allow the guys in the drill to see whether what they had done actually worked or not and Hyman made sure the returner and everyone within ear shot knew it.

• During the 11-on-11 live offense period, Montell Cozart was the first QB out there with the first team. That could mean something, but it also might not. Likens said the other day that he makes a conscious effort to ensure that both Cozart and Michael Cummings work equal reps with the first-team offensive line and the second-team offensive line so he can see how each guy reacts to the adversity and advantages that come with both. It might have just been how the rotation fell today so I wouldn't read too much into Cozart being out there first just yet.

• Speaking of QBs, one thing I noticed that was new to me was hand signals from the quarterbacks at the line of scrimmage. Now, we're not talking Peyton Manning stuff here, but I did see these guys signaling to receivers and possibly even linemen with their hands after taking the calls from the sideline. All in the name of tempo, I'm sure.

When watching a show about some of the greatest linemen to play in the NFL, it was footwork that made them standout. Ballet lessons and all.

I am glad these coaches are paying attention to every detail and not letting anything slip. Barking orders on a t-shirt is hilarious, and I like it. I think the quarterbacks should only be allowed to yell "Omaha" when we start winning lol.

In the meantime, they should be forced to yell ...?