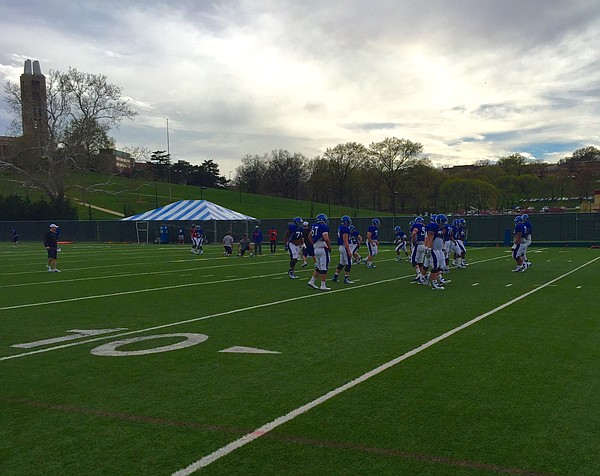 The Kansas University football team put another spring practice in the books on Tuesday. That's No. 9 of 15 for the Jayhawks, who will wrap up spring ball with the annual spring game on April 25. by Matt Tait

If you're looking for signs of optimism regarding the progress of the Kansas University football team this spring, here's a nugget that might interest you.

On Tuesday, at the ninth practice of the spring, the Jayhawks jumped right into a special teams period following the stretching and warm-up session as they normally do.

For the second time in the past few practices, kickoff return was the focal point of the period and it jumped out at me how much the Jayhawks had improved in such a short time in this department.

Things that were merely being taught at a practice last week now looked like things these guys had been doing for years. And the overall energy and intensity of the drill looked much sharper, crisper and efficient.

It's one drill. And this does not mean that all is well and that this coaching staff has a magic wand that can turn frogs into princes.

What it does mean, though, is that these players are continuing to put in the work and what they're being taught is starting to take hold.

Here's a quick look at the rest of what caught my eye at Tuesday's practice:

• There has been some message board chatter about the health of left tackle Jordan Shelley-Smith and I even wrote last week that he wasn't working in every drill. But he was out there today and seemed to be fine. Good news for an offensive line that's still coming together.

• I thought it was interesting to watch the tight ends working drills with some of the wide receivers on Tuesday. Ben Johnson, who every day looks like he's poised to step into a big time role, and Kent Taylor were working on routes with Tre' Parmalee, Rodriguez Coleman and Tyler Patrick. Nothing Earth-shattering here, but it speaks to the potential interchangeable nature of these positions in an offense that may use as many as 8-10 pass catchers per game.

• Speaking of interchangeable, I noticed that former Free State High standout Joe Dineen was working with the safeties at Tuesday's practice. Dineen, who started as a safety and then moved to running back and finally linebacker, is listed on the roster as a linebacker. He's been held out of most contact drills throughout the spring while recovering from an injury so maybe him working with the safeties was just a way to get him some more mental reps and keep things sharp in case he's needed back there, as well.

• We continue to hear nothing but good things about the way Montell Cozart and Michael Cummings are battling for the top spot on the depth chart at quarterback. So I took an extended look at both on Tuesday. Forget arm strength, footwork and those types of things. I'm not fully qualified to critique that, nor do I get to hear what they're asked to do with each rep. One thing that jumped out at me while watching though was how both guys constantly looked for time to get some work in between reps. If Cozart wasn't throwing live, he was working on his arm placement or drop back. And if Cummings wasn't up in the drill, he was doing the same, while also clearly working through some mental reps. We've heard a lot over the years about the importances of these extra reps and it's cool to see both guys taking it seriously.

• Speaking of the two QBs, I believe we'll get to talk to them and maybe a few other players sometime this week. So it should be fun to hear how the battle's progressing and how they're liking the Rob Likens/David Beaty offense.

Great to hear your thoughts about Ben Johnson! Years ago, my wife taught with his mom in Basehor! He was like a 4th grader and used to play with our 2 year (now 13) old after school! Great kid!!!! Hope he has a huge career for the Hawks!

The TE's are the players that can make a big difference in the receiving game for KU this year. You need receivers with size to fully take advantage of the offense KU is running. TE's split out wide create match ups that favor the offense because they're usually faster than LB's and bigger than DB's and KU has a couple of TE's that can create favorable match ups for the offense.

My husband is an OU fan so we went to the spring game last weekend and they announced attendance of nearly 43,000. I'll be at our spring game and I would love to see a good turn out for our game as well!

The words "Cozart" and "Quarterback" should not be mentioned in the same sentence. Please God, no.

Agreed! I hope that the coaches are looking at in-game situations as well in their assessment! He has the skills/and is a great athlete, but his decision making in the pocket was BAD!

With Jordan Darling having already been moved and the two QB recruits not reporting until the summer, KU needs more than 2 bodies at QB for the spring.

That's my point, if Cozart is moved now, KU only has Cummings and Millweard at QB for the spring. Cozart gives them a 3rd QB for the spring which is crucial for getting players as many reps as possible to adjust to the tempo that Beaty and Likens want to play at