No need to be alarmed, but Friday's eighth practice of the spring session for the Kansas University football program may have been the first in which special teams coach Gary Hyman did not sport his signature look of a turtleneck and pants.

According to one KU official, who also noticed the fashion trend, Hyman was mic'd up for Friday's practice, an episode of KU's web-only, behind-the-scenes look at practice that surely will go down as a must-watch.

Hyman usually looks something like he does in the photo below: 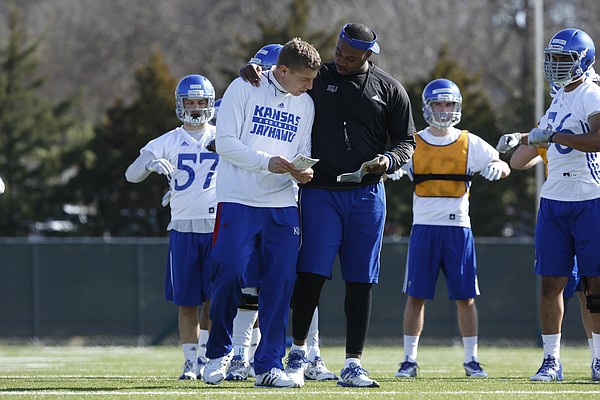 All joking aside, I continue to be amazed by Hyman's energy. It's as if the guy just never has a bad day — or at least as if he's immune to showing it. When he's on the practice field, his entire focus is on giving every ounce he's got to teaching the Jayhawks in front of him whatever drill or skill they're working on that day.

It's not just Hyman who operates this way, but he's definitely one of the loudest and most entertaining of the bunch.

With Friday marking the first practice of the second half of the spring, I tried to spend a little more time looking at depth chart situation, knowing darn well that what's out there today could change a dozen times before the first game. Still, it's at least an indicator of which guys have performed well through the first part of spring ball.

Here's a look at what else caught my eye at Friday's practice:

• I got my first look at some kickoff return drills and it's safe to say that there's still quite a battle going on back there for which guys will get first team reps with that unit this fall. On Friday, Rodriguez Coleman, Derrick Neal, Ke'aun Kinner, Corey Avery, De'Andre Mann and walk-on Ryan Schadler (a red-shirt freshman from Hesston, Kansas, who ran track at Wichita State and continues to catch my eye with his blazing speed and all-out effort) all took turns with the first team. There's a long way to go before that gets sorted out, but it's definitely fair to say that's one area where KU is not hurting for options, provided they can afford to use front line guys in that role.

• Speaking of that drill, LBs coach Kevin Kane and WRs coach Klint Kubiak (I guess it was a K-name thing) ran the drill and their emphasis was not on the return guys but rather on the first three blockers in front of them. Not only did they emphasize steps and direction and spacing, but they also made it a point to hammer home to those guys that it's extremely critical for them to yell to the wall in front of them that the ball has been caught and they're coming. “Caught it, caught it, caught,” barked Kubiak, demonstrating the proper style and volume. “Yell and be loud out there, fellas. Make sure they hear ya,” Kane added. 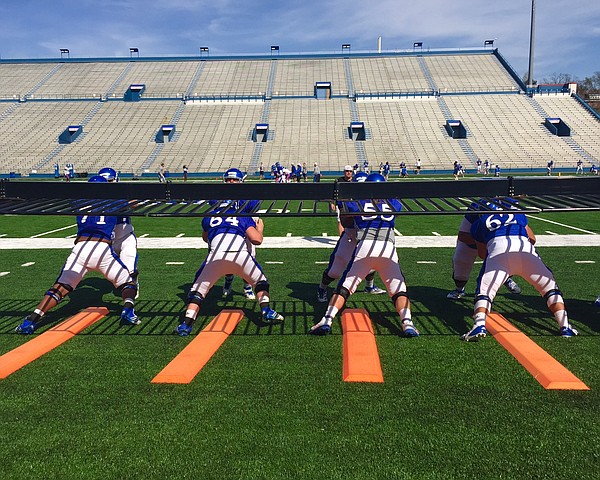 KU's offensive line runs through a drill at Friday's practice. by Matt Tait

• Quick update on the first- and second-string O-Line units. It seems as if regular first-team left tackle Jordan Shelley-Smith might be dealing with some kind of a nagging injury so on Friday the ones lined up like this: LT Joe Bloomfield, LG Bryan Peters, C Keyon Haughton, RG Junior Visinia, RT Larry Mazyck. The twos looked like this: LT Devon Williams, LG Kyle Pullia, C Jacob Bragg, RG D'Andre Banks, RT Jayson Rhodes.

• I spent the last part of the practice we were allowed to watch observing the wide receivers and both Rodriguez Coleman and Tre' Parmalee jumped out at me throughout the drills. Coleman just looks so effortless in everything he does. If you're not into that sort of thing, you might mistake it for a guy with a lack of a motor, but I don't think that's the case. He just moves so well and has some pretty good experience, that this is all old hat for him. As for Parmalee, his hands (which never were an issue) look stronger and better than ever and he's another one of those guys who you can tell has played a little bit. Both guys are going to have to really step up for this young and inexperience receiving corps this fall, but it seems like they're doing a solid job of leading by example and helping bring the young guys along.

• The Jayhawks will have the weekend “off” and will return to the practice field on Tuesday for spring session No. 9.

I'm trying to remember if the past few year's attempts to rouse enthusiasm seemed as genuine as it does this spring. Deja vu makes me feel the need to protect myself from disappointments recently suffered, but there seems to be more soft-spoken energy and resolve emanating from this coaching staff, not only to players and units, but to LJW writers and staff as well. The writing comes across as much more sincere reports than just hype for the home team. Hell, even Keegs is getting off his cynical posterior more often than once a week. I would like to be closer to things for a better vantage point, but am closer to hopeful anticipation for my Jayhawk alma mater's long-time prospects than I've felt since Big Lew launched his witch hunt and turned 5-0 into 0-7. Short-term will still be grim, win-wise, but I doubt it will be heart-breaking and soul-sapping experience of the past 4.5825 years. Football epitomises TEAM sports to the point of rapture when all the little things bring big results.

I don't think Tait & company are doing any sort of propaganda, or ever have, to rouse support for the football team. I just think they come to practice and are observing things that impress them or concern them. What might impress them on the practice field, against their similar talent level teammates, might not necessarily translate against Big XII opponents. It shows how depth becomes important, not just for the games, but for how much each player can push each other in practice to get better.

But here's to hoping for a year that leaves us as fans feeling like the best is yet to come!

It's okay to just be a fan and root for the team. I'm less optimistic about how things will turn out than I was the last two seasons, but I'm just as excited to see how Beaty does.

I don't need the beat writers to remind me every article that the team is really not good. All i want to hear about is what they are trying to do, which gives me things to look for later.

I might be in the minority, but I enjoyed Weis' time at KU. He failed, in a pretty big way. By that man tried every damn out of the box thing he could to get better quickly. I don't regret rooting for Heaps and Crist. I feel for bad for them. It would have been a great story.

This feels like a nice reset. Turner Gill was supposed to be the motivator to put the team over the top, and destroyed everything. That was not fun. Weiss tried to get back to respectability faster than was actually possible, and gambled in order to make it happen.

Now Beaty gets to pick up these pieces and put forth a more logical rebuilding plan. I don't mind waiting for 3-4 years to see how it develops. Enjoying the process is the part of being a fan I love the most.

I live in St. Louis. This Blues hockey team is so good, but it has been a long road building them up to a team that might win a Stanley Cup. I don't regret every failed season, I've enjoyed watching that progress.

You know, comparing this to basketball, it's part of why I wish Self would pass on the one and dones. They might be the best guys for each season, but as a fan, watching Perry ellis over 3 years is more fun than watching Kelly Oubre leave before developing into a star.

So if you are reading these stories thinking that the team has a legit shot at a BCS bowl, then you will feel let down. but if you are reading them to gain more insight into what is going on within the team, who and what to watch for, you may enjoy the season, even if they are under .500 again.

Thomas, simply one of the BEST posts on KU football I've ever seen! Couldnt have summarized it better myself.

I absolutely rooted for Weis and Crist/Heaps to find success, because of what it would have meant for KU football, and also for each of those 3 men's careers--> it would truly have been a win-win-win story for coach, player(s), and the Univ.of KS.

Even the fact that Weis' jumpstart approach failed, it gave us many lessons, and it now sets the table of Beaty to do it the old-fashioned, tried&true rebuild way (slow, over several seasons). It simply has forced the fans to see that there is NO quick fix, and we'll have to be utterly realistic in awaiting a bowl appearance, as that would be the most obvious sign of a successful direction for the program.

When Isaiah Johnson decided to leave KU, apparently it was to be a graduate transfer to South Carolina.