The challenges — and advantages — of coaching football at a basketball school 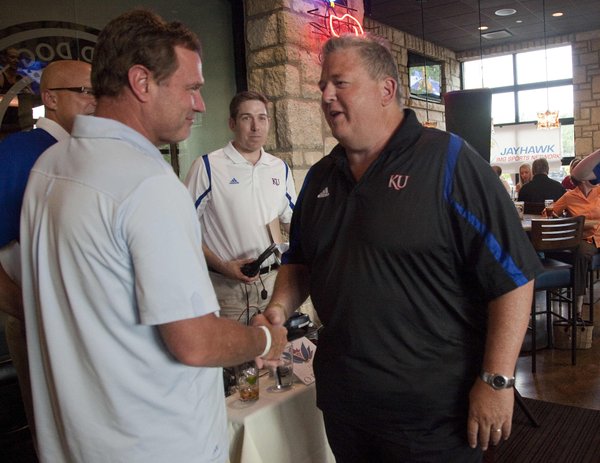 Kansas men's basketball coach Bill Self and KU football coach Charlie Weis get together for a radio talk show Monday, July 30, 2012, at the Oread Hotel. by Richard Gwin

Saturday's match-up between 1-0 Kansas and 2-0 Duke no doubt would grab much more attention if it were played in Allen Fieldhouse or Cameroon Indoor Stadium instead of outside on the turf at Wallace Wade Stadium in Durham, North Carolina.

Let's face it: Duke and Kansas are both basketball schools and there's not a person on the planet who doesn't think that.

That includes KU football coach Charlie Weis, who, on Tuesday, talked about the challenges — and advantages — of coaching the football team, which, in many opinions and at most schools is the king of college athletics, at a school where basketball rules.

"I don't know what (Duke coach) David (Cutcliffe) thinks," Weis said. "He's got Coach K and I've got Bill Self. Does it get any better than that? I mean, you're talking about arguably the two best, two of the best coaches in America. So from my standpoint, I hope basketball wins every game every year regardless of how we do. I appreciate the support I get from Coach Self and our basketball team, but most importantly, I can utilize their success to help use that as something to shoot for and definitely use as a recruiting tool.

"You can do one of two things: You can feel like a second‑class citizen or you can play into it, and I totally play into it. Totally. I don't look at it like that at all. I'm more than content with our basketball team competing for a national championship every year. I just want to get our team to where we're winning more than we're losing on an annual basis. That's what I want to do. I want to be winning more than we're losing on an annual basis. When we get to that point, you can ship me out of here. I don't want to do it once. I want to make sure we've got that set. Once we get that set, you can pack me up and send me out if that's what you want to do."

That last part was said with no bitterness or poor-me mentality. It merely was Weis re-emphasizing what he came to Kansas to accomplish, which was to get the KU football program to the point where it's considered a perennial winner.

The general rule of thumb used to be that new coaches would — or at least should — get five years to make that happen. Weis' contract with Kansas was for five years. And although he just started Year 3, he pointed to Cutcliffe's path at Duke as proof positive that, if given time, such a transformation is possible — even at a basketball school like Duke or Kansas.

"I know that Years 3 and 4 they won three games," Weis said of Cutcliffe at Duke. "So was he lighting the world on fire at that time? I mean, what he did was he put in a plan, he recruited, recruited, recruited, got guys he can get into Duke, which is not the easiest thing to do, OK, stuck to the plan, had support from the administration, OK, didn't waver. When people were saying, well, where is this heading, and all of a sudden Year 6 they go and win 10. That's the way it happens a lot of times when you walk into a program that just hasn't done too well recently. I have a lot of respect for the job they've done, and hopefully we cannot only emulate that, but hopefully we can speed up that timetable just a tad."

KU and Duke will square off, in football, at 2:30 p.m. Saturday at Duke's home stadium.

Why did the Duke fans and alumni put up with only 3 wins in years 3 & 4? And we can't? Maybe just too many whiny fans. I for one can tolerate it because I really believe it takes 4-5 years to get 5, 6 wins in what is a way tougher league than the one Duke is in.

Tolerating losing is the mentality of cellar dwellars.

I think you're spot on Danny. Football isn't chess where everyone starts out with the same pieces and you just have to out maneuver opponents. Building a recruiting base is so vital to a healthy program and unless you get some crazy name recognition, like Stoops at Kentucky, you won't just turn around a program in 2-3 years with the quality of recruits Kansas gets. It'll take a little bit of luck to nail some diamonds in the rough that can then start gaining momentum with more talented players. If Boise State can get 4* recruits, KU should be able to.

David A. Smith 8 years ago

I remember Bill Snyder's early days. He had to temper the jubilation of winning, in order to build the expectation of winning. Celebrating a win was brought down to a simmer. "Fake it 'til you make it".

From top to bottom, CW is going to have a much tougher time getting out of the 3-4 win column in the Big 12 than Duke in the ACC.

KU has had 12 football coaches since my freshman year in 1964 so that's an average longevity of 4 years per coach. To me, it shows a history of a lack of support. A basketball team with 1 or 2 recruits can make a huge difference in the win column. In football, many more recruits are needed each year to develop depth and especially time is required to get their physical level higher.