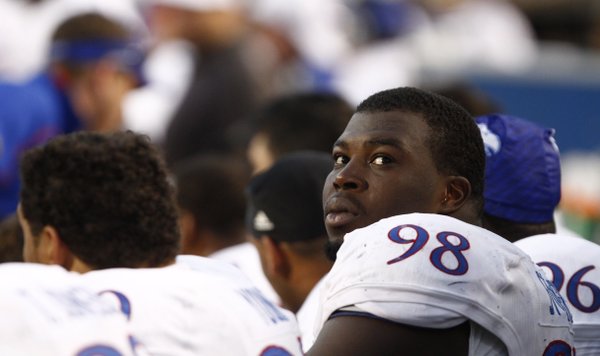 Kansas defensive lineman Keon Stowers looks up at the scoreboard during the third quarter on Saturday, Nov. 9, 2013 at Boone Pickens Stadium in Stillwater, Oklahoma. by Nick Krug

He entered the season hoping for a monster season, one that would show off the blood, sweat and tears he put into fine-tuning his skills and reshaping his body in the offseason.

Yet, so far, through two games, KU senior Keon Stowers has just seven tackles and a half tackle for a loss.

Not the numbers the former Georgia Military standout was hoping for, but the lack of production has hardly been all Stowers' fault.

See, when you start to make a name for yourself as a disruptive force, particularly on the defensive line, then other teams start to gameplan around you and try to do whatever they can to take you out of the action. In some cases, teams run away from a big-time tackler. Think Green Bay's Clay Matthews or Denver's Von Miller. Other times, teams run right at those same guys in hopes of neutralizing their momentum and making them react to something coming right at them instead of having time to rev up their engines to make a play.

In the case of Stowers, KU's 6-foot-3, 297-pound nose tackle, it's double-teams that have been the weapon of choice for KU's opponents.

Take the Duke game alone. In that one, the Kansas defense was on the field for 77 snaps. Stowers played 47 of those. And of those 47 snaps, he was double-teamed by two Duke offensive linemen 27 times, that's more than half of the plays.

Stowers has handled the extra attention well, even if he has been a little frustrated that it has prevented him from bringing down ball carriers. But even though he knows his occupying blockers is a good thing for the KU defense, he's still grown a little tired of the constant pounding.

“I am. I am,” he said. “But I really just feel like I could be in a tackle position where I'd be matched up with a tackle and get more production there. But I do a lot of things that go unnoticed like holding the double team so (linebacker Ben) Heeney and other guys can get in there. I do get tired of it, but that's my job.” 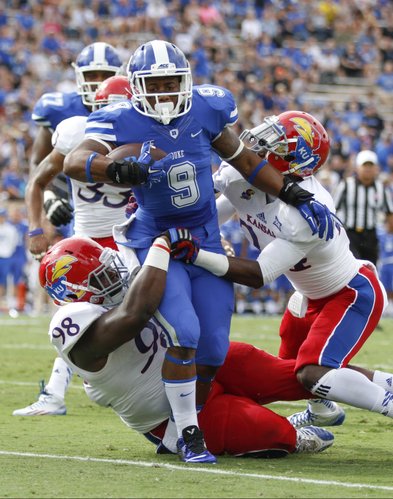 Because KU's defensive line is full of unproven players, it makes sense that Stowers would become the focal point of opposing offenses, and he, the KU coaching staff and the rest of the guys next to him in the trenches expected it when the season began.

“We're a little thin at the D-Line,” Stowers said. “We accept that. We know that. We're not gonna be naive to it.”

Stowers said he was hopeful that things would change a little bit this weekend, when the Jayhawks face Central Michigan at 2:30 p.m. Saturday at Memorial Stadium. Without divulging any details, the big man from Rock Hill, South Carolina, said the coaches had experimented with moving him around to different spots this week in hopes of freeing him up to make more plays.

“I've been lickin' my chops,” he said. “I really like my chances with this game and I've been studying the guards and the center and the tackle and I'm ready to play end, nose, tackle, wherever they put me at. Anything. I'm ready.”

As unselfish as any player on the roster, Stowers wanted to be sure to emphasize that all of this talk about him being double-teamed (something that I asked him to talk about, he didn't just bring it up on his own) was not even close to the most important thing on his mind right now.

That, he said, was helping Kansas find a way to bounce back from last week's debacle at Duke and getting back on the winning track.

“This is perfect timing,” he said of the expected physical match-up with CMU. “It's gonna give us the chance to not only be physical and not only show what we can do, but also to bounce back from a disappointing loss and not only put (Duke) away but to bury it.”

Clearly, that's the goal, but, because of the way things have gone in the past, there's at least part of these guys that can't help but wonder what things might be like if the outcome does not go that way. Stowers had no problem admitting that.

“If we go out there and lose, then it could be a situation where we start thinking, 'Uh oh, shoot. It's about to start.'”

That's not what anyone in crimson and blue, including Stowers, is expecting to see unfold this weekend, though.

“(This week) was one of our best Tuesday practices,” Stowers said. “We were flying around. Coach (Charlie) Weis was up moving more than usual and he was more involved. Mentally, we're past (Duke) and we're ready to beat Central Michigan.”

There are so many comments here that speak volumes about why KU Football is where it is it's hard to find a place to start.