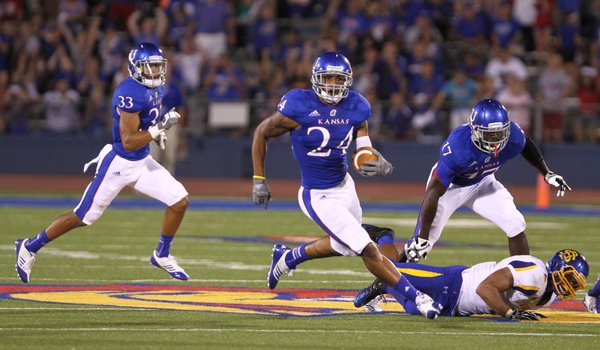 Kansas safety Bradley McDougald takes off up the field after an interception in the third quarter against South Dakota State, Saturday, September 1, 2012 at Memorial Stadium. by Nick Krug

Kansas University's run of having undrafted players land on 53-man NFL rosters continued rolling along last weekend, as four former Jayhawks who were passed up during their respective NFL Drafts survived their teams' final cuts and enter the season ready for work in the NFL.

Not a bad first day at a new job.

Two of the four were pretty much no surprise. Denver cornerback Chris Harris has become one of the top and most respected defensive backs in the league and Broncos' linebacker Steven Johnson, though still in that position of not being able to let up for a second, also has made himself a valuable piece of what the Broncos hope will be another Super Bowl bound puzzle.

Both guys were never in jeopardy of getting cut and both guys continue to improve and impress the powers that be in Denver.

While those two sticking was hardly a surprise, the other two fell-good moments for KU football might qualify as just that.

After a fantastic preseason, cornerback Tyler Patmon made the final roster with the Dallas Cowboys and safety Bradley McDougald made good on his shot with his second team by being one of the final 53 kept by the Tampa Bay Bucs.

Patmon's story is a little more remarkable than McDougald's because there were plenty of people, both at the NFL and college level, who always believed McDougald would get plenty of chances to stick. That he's done it so quickly and with such certainty is a credit to him, both mentally and physically, and the work he has put in to make his dream a reality.

McDougald was one of just four safeties and 10 defensive backs kept by Tampa Bay.

Patmon's success story was born from opportunity. After leaving KU following his forgettable junior season, Patmon landed at Oklahoma State and became a key part of the OSU secondary that helped lead Cowboys to a Cotton Bowl berth last season.

Patmon looked like a different player during his final season in college, like a guy who needed a change and who was energized by the fresh start and new surroundings.

His strong senior season — not to mention OSU's team success — earned him an opportunity to prove his worth with the Cowboys this season; not bad for a Texas kid. Although he needed a tryout just to be included in the crop of 90 NFL hopefuls who opened Cowboys' training camp, Patmon survived cut after cut and made play after play. No moment was bigger than his two-interception preseason game in which he looked more like a seasoned NFL veteran than a desperate rookie just trying to survive.

“He just kind of has that way about him,” Dallas coach Jason Garrett told the team's official web site. “Some guys do. If you watch his Pop Warner tape, he was probably making those kinds of plays. That’s just a part of him being able to play, and that’s a good thing.”

Added Cowboys' cornerback Morris Claiborne: “As soon as he came in, he’s one of those guys that’s got that type of mentality, swagger about himself where when he walks in, he kind of (commands) that attention. He goes out and he plays lights out. It goes from the practice field, from seeing him work and taking it on to practice and from practice to the games, it’s amazing.”

So is the fact that Patmon is starting his pro career on an active NFL roster, but like Harris and Johnson before him, his story is proof that hard work and being ready to take advantage of the limited opportunities that come your way at this level of football can pay off big time.

There's no hiding the fact that Patmon benefited from a couple of injuries to key guys ahead of him on the Dallas depth chart. But the guys who get these chances tend to be the guys who stay ready and don't worry about the overwhelming odds stacked against them.

Harris, Johnson, McDougald and Patmon all stared up at that mountain at one point in their post-college lives. And today all four are sitting on top of it with a Jayhawk flag planted at the peak and a huge smile on their faces.

In other former KU NFL news from last weekend:

• Former KU running back/defensive lineman Toben Opurum made it to the final cut of the Houston Texans but was not a part of the team's final 53-man roster when it was announced. The Texans, however, quickly signed Opurum to their practice squad and I think it's a safe bet that you'll see him active at some point — perhaps multiple points — this season.

• Former KU wide receiver Dezmon Briscoe was cut by the Dallas Cowboys, with whom he landed temporarily after being released by the Washington Redskins, his fourth team in a slow-starting five-year NFL career.

• Former Jayhawks who were drafted into the league such as Aqib Talib (Denver), Anthony Collins (Tampa Bay), Darrell Stuckey (San Diego) and Tanner Hawkinson (Cincinnati) easily made their teams' final 53, as expected.

Seems like Patmon was 'cut' by Weis in time to play for OSU. Too old to be sure of names, but I think Patmon intercepted and ran back a pass in the N. IL game. He hadn't been taught tackling, maybe still hasn't.

I recall that Tyler led the team in INT's at least his RS-Jr year, if not the one before as well. Don't recall hearing that he had a problem with tackling, but maybe that is why CW decided to move on to the JC's - who have provided multiple years of successful play. Still wish he had finished out his career contributing to rebuilding KU FB.

"And today all four are sitting on top of it with a Jayhawk flag planted at the peak" Somehow I suspect Patmon's "flag" is an OSU flag and not a Jayhawk flag.

You may be right, but I know Tyler still has a lot of love for KU, what he accomplished there and all of his former teammates. It didn't end well for him at Kansas, but that may have been the best thing that ever happened to him so I doubt he's holding much of a grudge.

Perhaps it's one of those house divided flags with KU and OSU.

Tyler Patmon is good enough to make an NFL roster but was not deemed good enough to keep his job as a DB for us? On the bright side, at least our DBs were good last year. Otherwise this would be infuriating.

I just saw a post on sporttrac.com that James Sims was signed by the Giants yesterday. Can anyone confirm?

Looking into it, but I haven't heard anything. Are you sure what you saw wasn't an old transaction? There was a James Sims from Washington who played for the Giants back in like 2005, 2006, 2007... I know that's a while ago, but it still pops up on Google searches even when 2014 is included in the search prospects...

Go to spotrac.com (I mistakenly labled it as sporttrac in my earlier message) and under the football tab search for James Sims. I pulled this up from a google search with a one month date range.

It isn't KU's James Sims. The James Sims signed by the Giants is 31 years old according to the website that you posted the link to.

I saw the age as we'll, but the site listed Kansas as the college?

Good article. Glad to see these former Jayhawks make it in the NFL. Toben is doing big things even though he didn't have the benefit of staying on offense during his time at KU. To this day, I'd still say he would have been drafted had he stayed on offense. Not surprised with McDougald. Knew he'd play on Sundays. And wow, Harris is making the most of it and solidfying himself as one of the best in the league. He had a great freshman year, but after that just ok. So that's awesome that he has gone to the NFL and played lights out.

The most surprising of this group is Patmon. It's a remarkable story when you think about it though. Had his issues (along with a lot of other players) while here for sure, but bio: in his 3 years here as a starter for KU--- totaled 142 tackles, 11.5 tackles for loss, 22 passes broken up and six interceptions. Led the team with three interceptions and ranked second with eight passes broken up in 2012. His 58 tackles in 2012 were good for fourth on the team. He started nine games at nickelback as a redshirt freshman in 2010…Ranked third on the team with 5.5 tackles for loss in 2010. And one of the biggest comebacks in football college history happened in no small part because of Patmon in that Colorado game (creating turnovers, INT, fumble recovery for a TD, etc…).
Saw flashes of Patmon here and there of what good potential was there while he was here at KU, in particular at the nickel position. But there were times it didn’t come together, but that was not all on the players. That’s just a fact from watching both sides of the ball. And being with the coaching staff and in the defensive scheme and players at OSU, Patmon tapped back into what he flashed here and there and just balled out game in and game out all season. Was a Playmaker. Lead the OSU team in pass breakups as well and led the corners in tackles for a loss. Won most outstanding newcomer there and was highlighted time and again for his defensive performances. He had a great final season at OSU and was a critical part of the success this past season.
Undrafted tryout guy from KU (and OSU) makes NFL 53-man roster, can’t hate on that. Feel-good story. For some of these guys to fly under the radar and be just average for most of the time and go do well on other teams and in the NFL, not sure if that says more about the player or the KU football system. But hoping for a turn around season this year for KU. Rock Chalk!

But what happened to Sims?