What caught my eye at Wednesday's practice: Oct. 8th 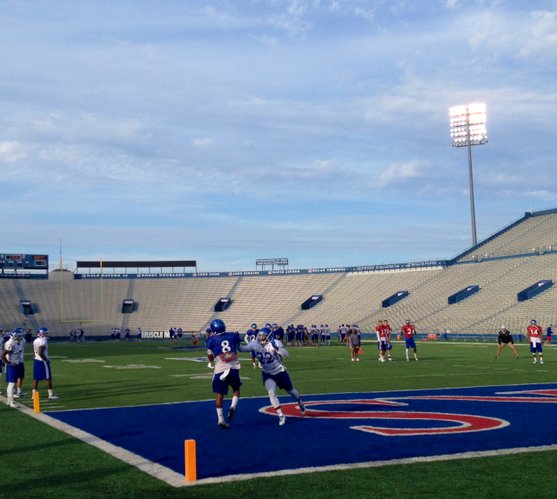 KU receiver Nick Harwell and defensive back Greg Allen battle for a ball during Wednesday's one-on-ones. by Matt Tait

If there's one thing I've learned in the two Kansas University football practices we've been able to watch since Clint Bowen took over as the team's interim head coach, it's that paying attention to detail won't be lacking for the Jayhawks.

Bowen and his squad again spent the first hour or so of practice working on fundamentals and drills that are both designed to prep the players for their next opponent and develop them for the future.

Wednesday's session began with Bowen — the current head coach — walking his kickoff coverage team through a very slow and methodical drill designed to teach kick coverage. It seemed appropriate given (a) the fact that KU gave up a kickoff return for a touchdown last week and (b) Bowen has emphasized a ton in the past two weeks that KU has to get better in special teams if it expects to have a chance to compete in the Big 12.

There was nothing flashy about the drill, just 11 guys running quarter-speed down the field and focusing on staying in their lanes. Later, the team went to full kickoff coverage and tried to recreate the slow-mo specifics. 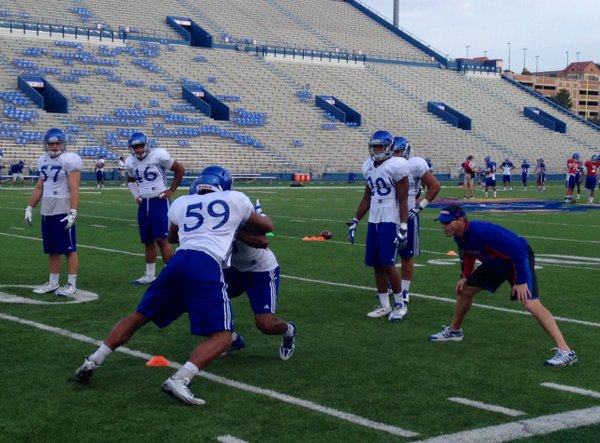 • Shortly after the kickoff coverage drill was complete, the Jayhawks emphasized field goals and Matthew Wyman had a fantastic day. Wyman drilled all of his kicks, including one from near 50 yards. As Wyman set up, senior receiver Nick Harwell was making sure those on the sideline realized the importance of every little detail. “Let's make sure we make this (stuff) matter,” Harwell yelled repeatedly. As soon as Wyman drilled the kick, Harwell was the first to lead the charge in celebrating the kick before the Jayhawks moved on to individual drills.

• One of my favorite parts of these practices has become the one-on-ones between the wide receivers and defensive backs. Not only does it show guys competing their tails off, but, on Wednesday, it also gave me a good, rapid-fire look at all three KU quarterbacks competing for the starting job. It was too hard to tell exactly who looked best as a thrower — each guy (Michael Cummings, Montell Cozart and T.J. Millweard) had good moments and bad — but it was easy to see who was the most impressive receiver. His name was Nigel King and he caught everything. King got open, used his big frame to shield off DBs and snatched the ball out of the air with his strong hands the way a father might catch a return throw of a Nerf football from his son. 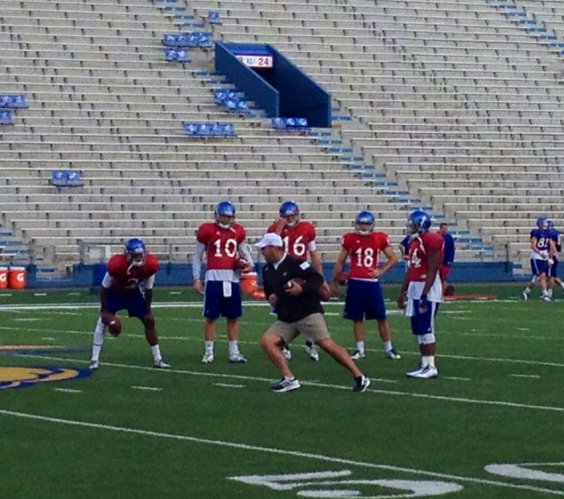 • One other quick note about kickoffs: Don't be surprised if you see KU senior Tony Pierson back there returning kicks this week. The coaching staff has really emphasized trying to find ways for Pierson to get more touches and that could be an easy one. To no one's surprise, Pierson also got some reps at WR and RB on Wednesday.

• It might not mean much come Saturday, but quarterback Michael Cummings and center Joe Gibson worked with the first unit at the start of practice. If that holds to Saturday, it would be a change in the starting lineup at both spots, as Cozart and Keyon Haughton had started the first four games in those positions. Again, it's too early to say and too hard to know if that was an indicator or just a rotation-type coincidence.

• KU alum Dana Anderson, a huge Jayhawk supporter whose name is on the outside of the Anderson Family Football Complex, attended Wednesday's practice and spoke to the team before the action started.

Far too much being made about TP's touches. Harwell is where the focus should be. Tony on returns? Please, no. If you want to get him the ball, run a hook and ladder and watch him run.

Focus the rest of your efforts on Avery and Harwell - that's where the bread is buttered.

...and Mann + King. We have weapons. Gotta get them the ball, or what's the point of playing this sport?

I would love to see TP back on kickoff returns. If we are going to win a game this year, and that is a big, big IF, we are going to need to steal some points on both "D" and special teams. Regardless of the changes we make on offense and at QB we simply are not going to be good enough to put up multiple TDs in a game.

Also, not entirely surprised about King, he has impressed me more than just about anyone else this year.

Give Cummings his chance and if no success, keep going down the order. Until we find a QB who can get the ball to the receivers with a higher than 50% completion avg nothing will change.

There is nothing methodical or slow about Tyreek Hill. The coverage teams will have to be ready. And the KU staff only has to watch how OSU uses Hill to see how they should be using Pierson.

I've noticed in the past 2 weeks, that once a week Coach Bowen has a former KU / Alunmi journey in to speak to the troops. To me, this is very encouraging to see.

Is it just me or do you all sense some Mangino/Mason football dicipline(s) being enacted by Bowen. I know Clint isn't a popular choice for our next head coach, but I for one am hoping he can bring improvement to this team week in and week out to warrant strong consideration. What a great situation to be in to have a head coach being a former player, grew up in Lawrence, former position coach, considers Kansas his dream job and a destination job. It would be huge if it worked out. Here's hoping it makes sense to do it and if not find the best candidate possible.

Rumor has is Frankie Seurer Jr is back on the team. He was pretty darn good at Hutchinson last year but I have not been able to see any of his highlights or film to see how it actually is. If anyone has a link that would be awesome. If Cozart, Cummings, Millweard, Darling can't do it then it would be really cool to see a walk-on/legacy come in and right the ship. Probably wont happen and he may not get the chance but it would be cool.